Conquering ‘The Nest’ in Red Rock

I wasn’t always a native Las Vegas rock climber/boulderer. My roots are located in Columbus, Ohio where I lived until 2009. Living in Ohio, one would think that becoming a rock climber doesn’t make sense, let alone a boulderer. For this reason I was forced to travel a lot!

Over the years climbing and bouldering have taken me all around the U.S. and Europe.  Throughout the 18 years I have been climbing, Las Vegas was always on my mind as one of the number one stops every winter. Most climbers know about Red Rock Canyon as a climbing mecca featuring some of the country’s best multi-pitch traditional climbing along with its famed sport climbing. It wasn’t until the 10 years or so that people started to notice there was amazing bouldering in Red Rock, too. 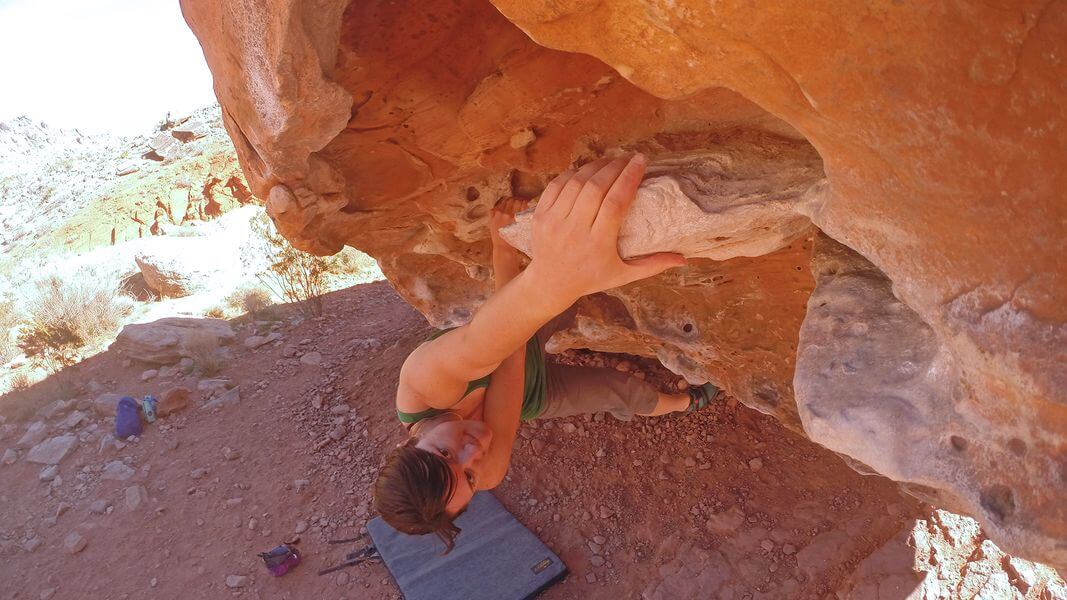 For those who aren’t familiar, bouldering is a form of climbing that requires little to no gear at all. Most boulderers do, however, invest in a pair of climbing shoes, chalk, and a large pad known as a crash pad.  This “crash pad” is your safety net so to speak, which is placed at the base of the boulder in a spot that the climber thinks they may fall onto if they slip or let go.  The object of bouldering is to ascent a climb that is normally no taller than 20 feet or so and follow a distinct path to the top. Boulderers are always looking for a new challenge and trying to find the hardest possible moves to the top that physically challenging them to the max. 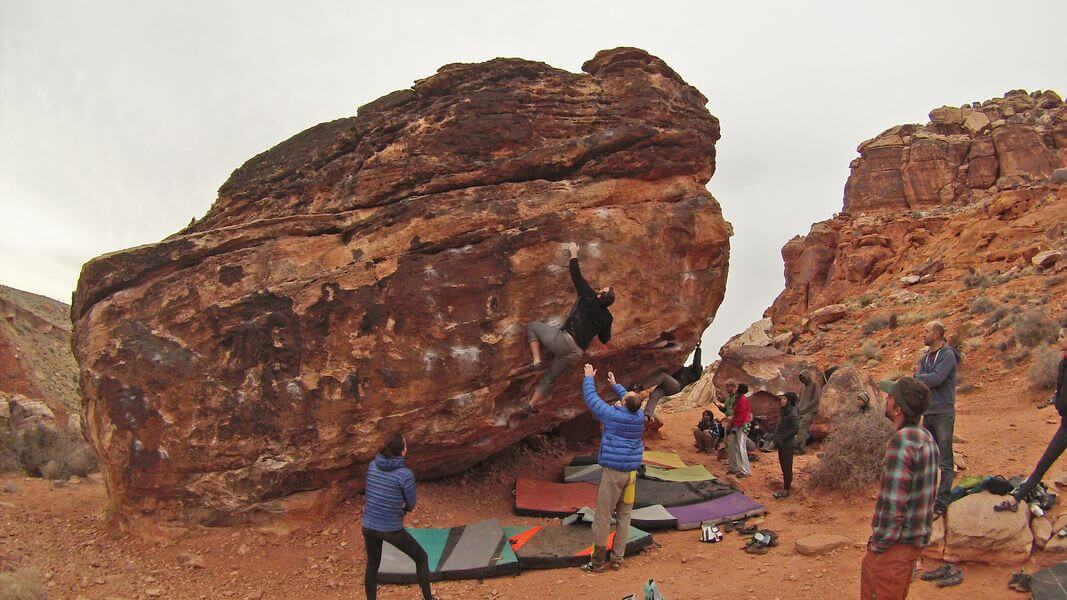 After spending the first 15 years of my climbing career traveling and living is different parts of the world to seek out the best boulders and rock climbs, my wife and I decided that Las Vegas was the perfect place to settle down for a while. We left the amazing culture and climbing in Europe to moved to Las Vegas for the bouldering in particular. The bouldering in Red Rock Canyon, Calico Basin, and around Kraft Mountain host some of the best boulders to climb on in the area…people travel from all around the world to climb on the boulders located here. 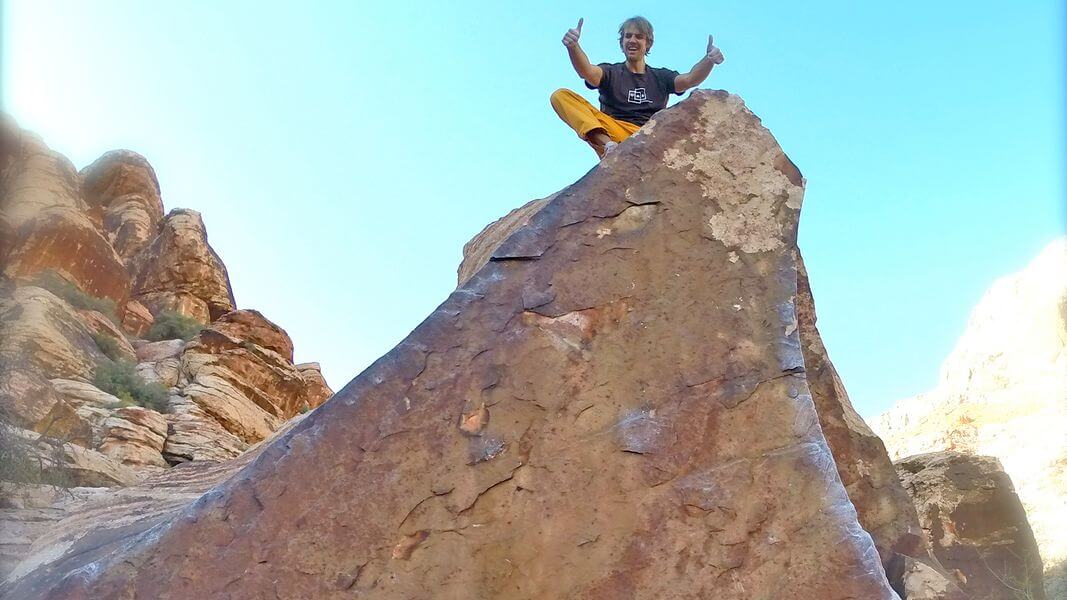 I remember that first summer here in Vegas. It was hot a heat that I had never felt before, but I didn’t care, so a friend and I decided to explore the area for new boulders to climb on. One day while suffering through scorching sun on a 112 degree day, we came across a boulder climbers only dream about. We touched the holds, and envisioned cooler conditions so that we may one day try to climb this perfect 20 foot boulder nestled in the back of First Creek Canyon. We took pictures, imagined our ideal climbing day here, and kept moving.

Once home I stared at all the photos taken throughout the day and thought to myself, this flawless boulder is definitely too hard for me and could possibly be one of the hardest in the country, if not the world!  So I decided to share this discovery with a few friends of mine that were capable of such an insane human feat.  These friends ended up being professional climbers, Jimmy Webb and Daniel Woods, who also brought another fellow professional Nalle Hukkataival. We refer to these three as the “A” Team. 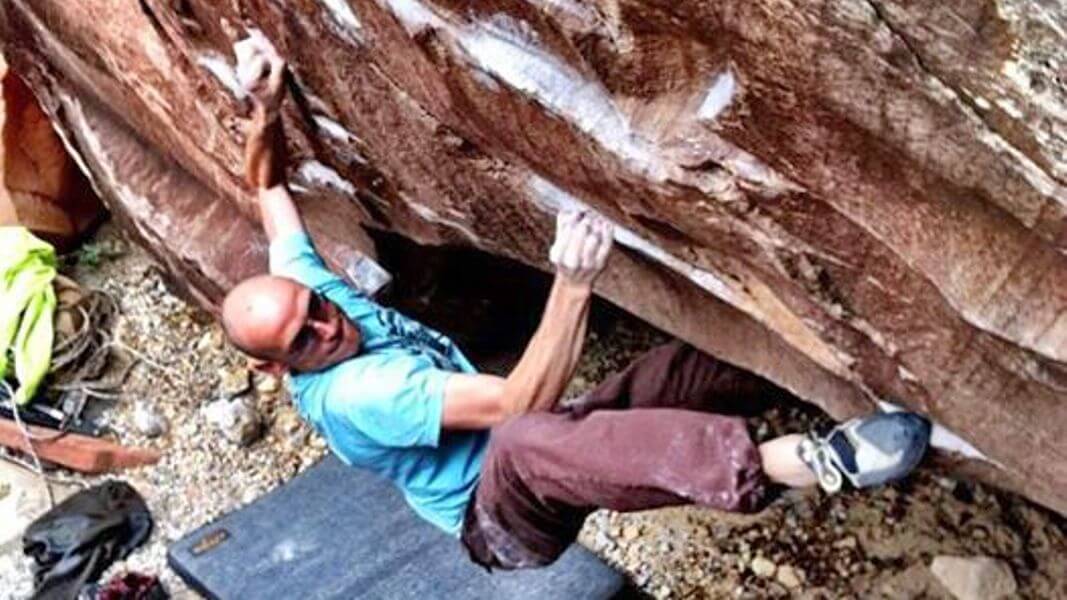 When this elite group arrived, they headed straight out to the “Mega Project” to see if it looked as good as the photos. Once they were standing below it, they were mesmerized by the perfect rock, holds, and height of the boulder. The three immediately went to work figuring out a sequence that would potentially take them to the top. After the first day of working on the boulder, they found it was broken up by two parts, a v10 start to a v13/14 exit.

Now I guess I must explain this arbitrary grading system. In America, boulder problems are graded by the “V” Scale, which was started by John “Vermin” Sherman. This “V” scale starts out at v0 goes to v16 with v0 being the easiest and v16 being the hardest so far. 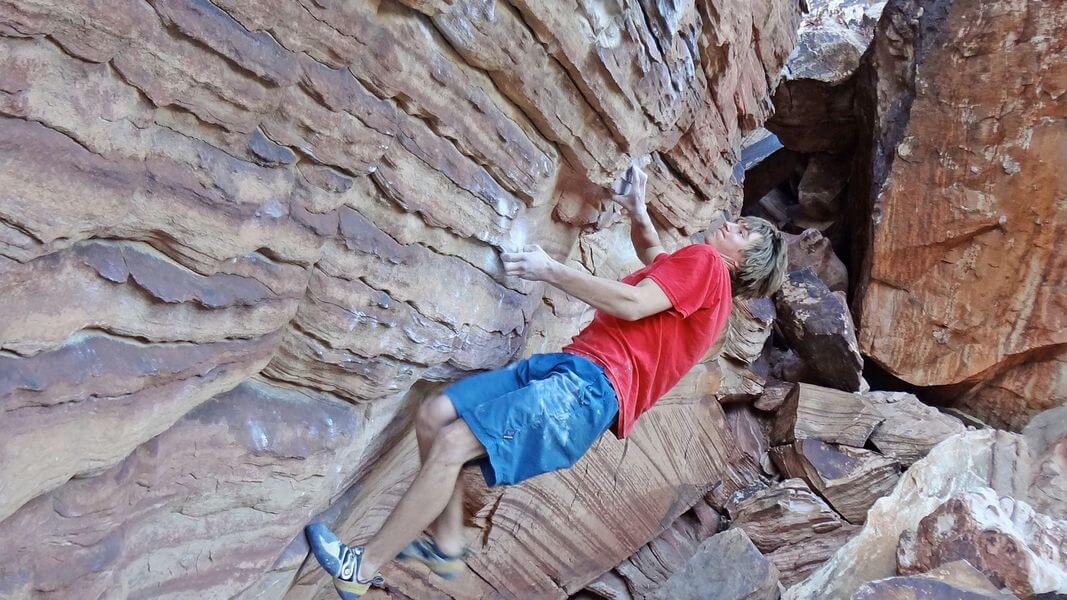 The second day, the A-Team made the 2.5 mile hike out to give this climb some more attempts in the frigid depths of the canyon. On this day, the guys gave it some good attempts and figured out some intricate methods for the hardest crux at the top of the boulder. Nalle was actually trying to climb in a street shoe for a little added reach. However, he realized that his shoulder was still a bit to injured to keep trying the shoulder intensive movements.

Throughout the following week, the A-Team took two days to keep trying the boulder problem. Both of these days Jimmy and Daniel came agonizingly close to sending this masterpiece. At one point, I remember watching Daniel grab one of the extremely large holds at the top but slipped off. At this point it seemed the boulder problem should have been over, but alas gravity prevailed once again.

Some time went by before the guys were able to make another trip out to that boulder due to some unseasonably cold weather. They ended up opting out, and checked out some of the other nearby bouldering areas. During these days, the guys climbed multiple different boulder problems ranging from v10 to v14. They seemed to love the area and the setting, with all of the different boulders situated high in the canyons or at the base any one of the mountains in Red Rock Canyon. 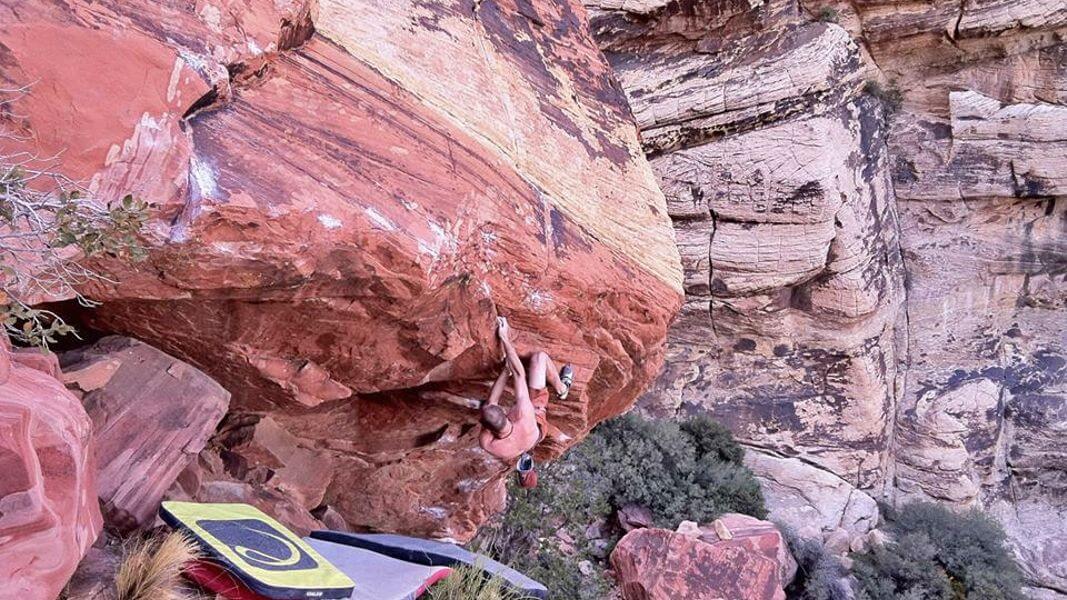 This brings us to our fifth day of attempting the “Mega Project” in First Creek Canyon. It was a balmy 38 to 40 degrees in the shady, windy canyon along with a bit of humidity in the air. Humidity can be a bad thing for climbers wanting to keep their skin as dry as possible, and in such a dry climate like the Mojave Desert, it doesn’t take much humidity to be dangerous. On this day, the guys knew their attempts on the boulder problem were limited due to the cold, clammy conditions. They both took turns on it, and both fell insanely close to the top, crashing into the nest the tree created. This happened a few more times before the guys were about to call it quits. They both rested for a bit drinking hot chocolate and moving around to try and stay warm. Daniel announced he was about to give it one last try for the day. He slipped his feet into his climbing shoes, chalking his hands up one last time before leaving the ground. 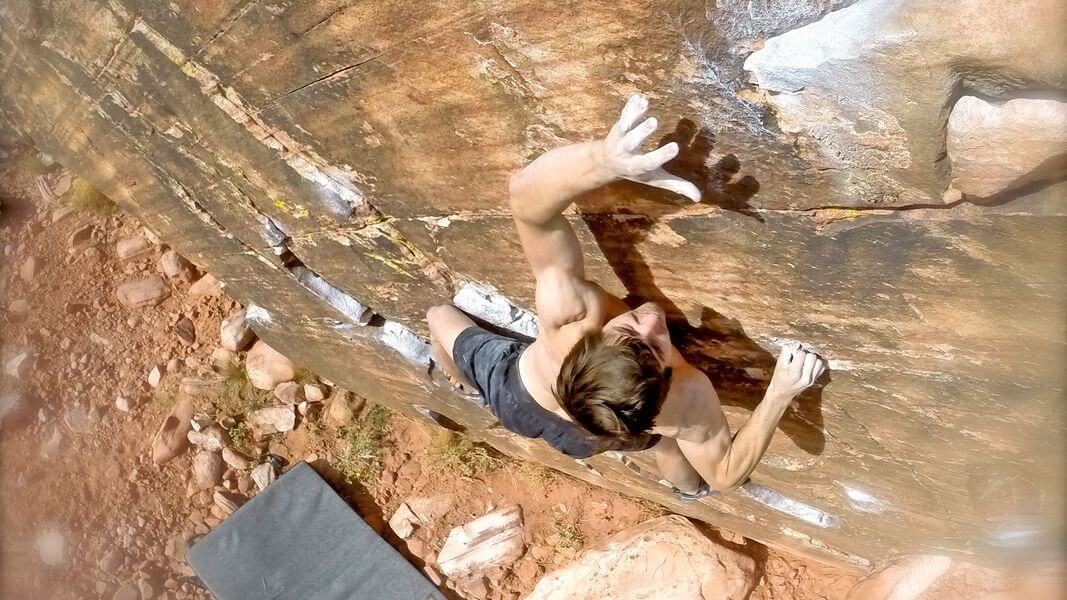 A moment later he fluidly glided through the “easy” v10 section and made the transition into the harder crux section with ease. A few extremely powerful crosses and pulls later he was at a previous high point of his. Although this time, he looked more poised and confident to casually reach the next even better hold. At this point, we all know he was done; everyone down below was cheering while a friend and I were standing atop the boulder for congratulatory fist bumps.

This was the first time this boulder problem had been climbed from start to finish. Daniel decided to name this perfect boulder “The Nest” which fits it extremely well. He graded this beast of a climb v15. This makes it one of the hardest boulder problems in the country.

With all this excitement of Daniel finishing off this project Jimmy decided to also give it one last attempt before heading back to the car. This doesn’t happen often on boulder problems of this caliber, but Jimmy squeezed insanely hard and fought his way to the top being the second person to climb it. In the span of 15 minutes, The Nest saw two ascents from the world’s best.

The A-Team traveled from different parts of the world to get a taste of what southern Nevada has to offer in the way of boulder. Red Rock Canyon in particular hosts some of the best boulder problems in America, if not the world. They travel to the Las Vegas area from all over the globe to sit in the middle of the desert, hoping to stand on top of these little, big boulders. So think, why not climb the big walls above instead of a tiny little pebble? Our answer to that is why not climb these little pebbles? #NVAdventure

Climbing and Preserving Red Rock, A Task 600 Million Years in the Making

17 WAYS TO GIVE ORDINARY ADVENTURE THE HEAVE-HO

Realizing A Dream: Long, Hard and Free in Red Rock