…Not if you mountain bike in Carson City! Just saddle up your bicycle, load up some water and provisions, and ride up into the mountains.

In early September a few of us did just that. The smoke was finally beginning to clear from the Rim Fire near Yosemite, and we were eager to enjoy some time outdoors. Wanting to avoid a few miles of asphalt, we shuttled our bikes to the Centennial Park Trailhead on the northeast side of Carson City. To get to this trailhead, simply enter Centennial Park, and drive out past the golf course and tennis courts to the very end of the road. There is plenty of parking near the trailhead at the Recreation Access sign. 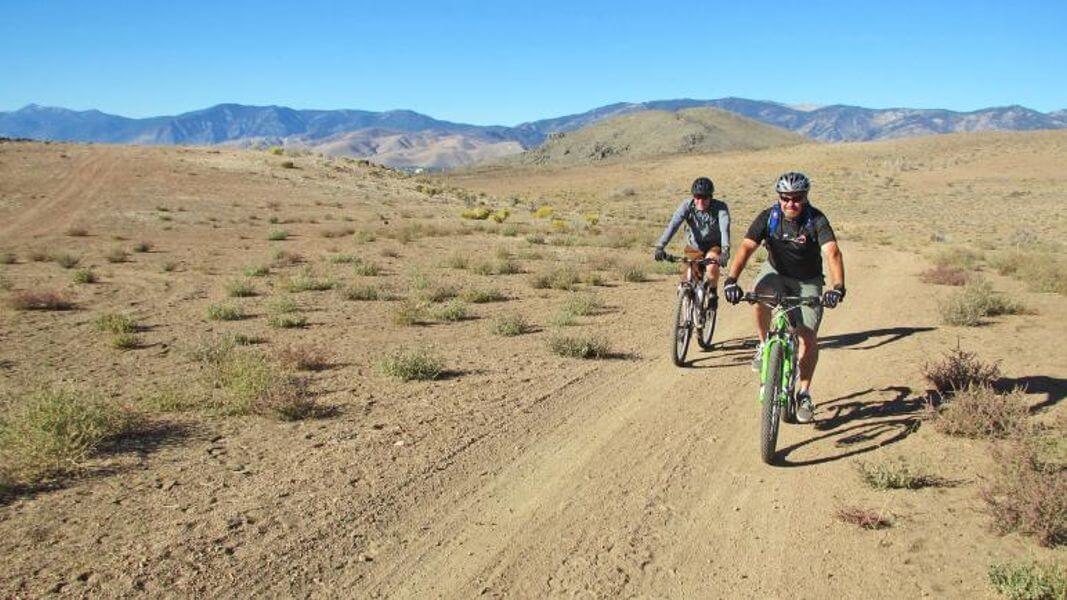 The Centennial Trail immediately climbs up around a rocky hillside. Having not done much mountain biking this summer, my legs immediately protested as we climbed and bounced up through the rocks. I suddenly worried that taking on a big ride like this might be a very bad idea. Soon enough though, the trail mellows out, and I was able to relax and get into a good climbing rhythm. Things were going to be OK. It's not the best way to warm up, but at least you get it out of the way early.

There are a couple trails that cross the hills over to Mound House. One goes straight up the canyon and over the top, the other is a gentler climb around the south side of the hill. Either path will get you where you need to be on the other side. Once over the first pass, we enjoyed a leisurely ride over to the V&T Railroad tracks. When we arrived at the tracks, we were treated to our first sighting of wild horses. As we were taking photos of the horses, the V&T steam engine came chugging slowly up the hill. We enjoyed the sights and sounds of the old train, and waved to all the people enjoying a more leisurely way to get to Virginia City. 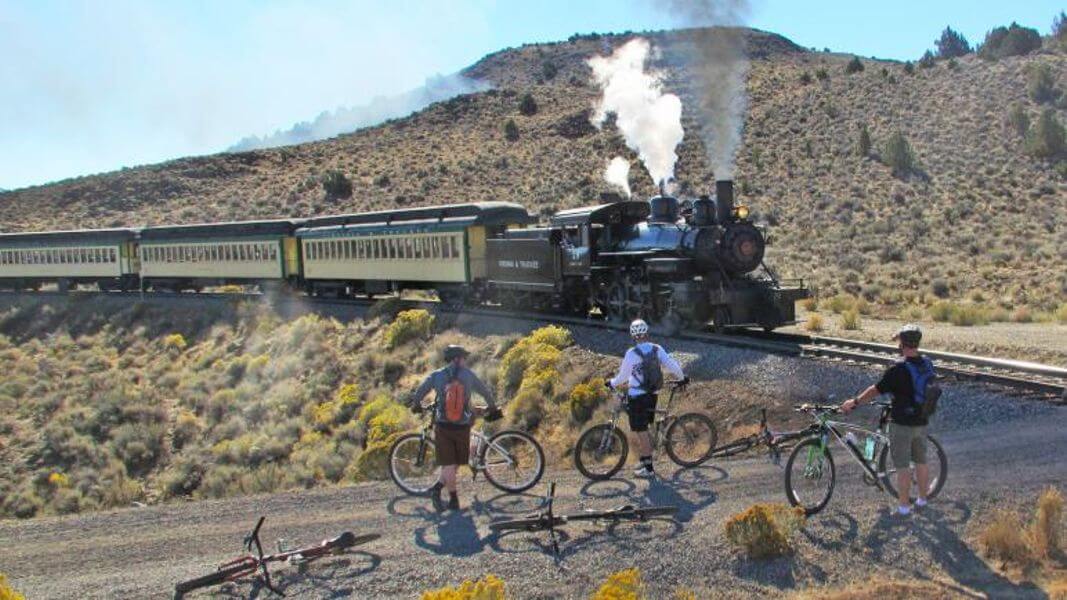 The trail here parallels the railroad tracks and Linehan Road. It eventually crosses Linehan road, and continues to the northeast towards a water tower near the end of Red Rock Road. Just below the water tower is the old American Flat Toll Road. The more technical singletrack riding ends here, the trail ahead now mostly a dirt road for the remainder of the climb.

We climbed up the toll road, leaving the smoke of the valley behind, and eventually came to a little spring bordered by cattails on one side. A small herd of wild horses were here, and they were walking down the hill to get a drink. They kept a close eye on us, but went about their business. After a couple of the larger horses drank, the lead horse stuck a hoof into the water and splashed it around and stirred up the water. This action went on for at least a minute. We weren't sure if there was some purpose behind this, or if it was simply just horseplay. 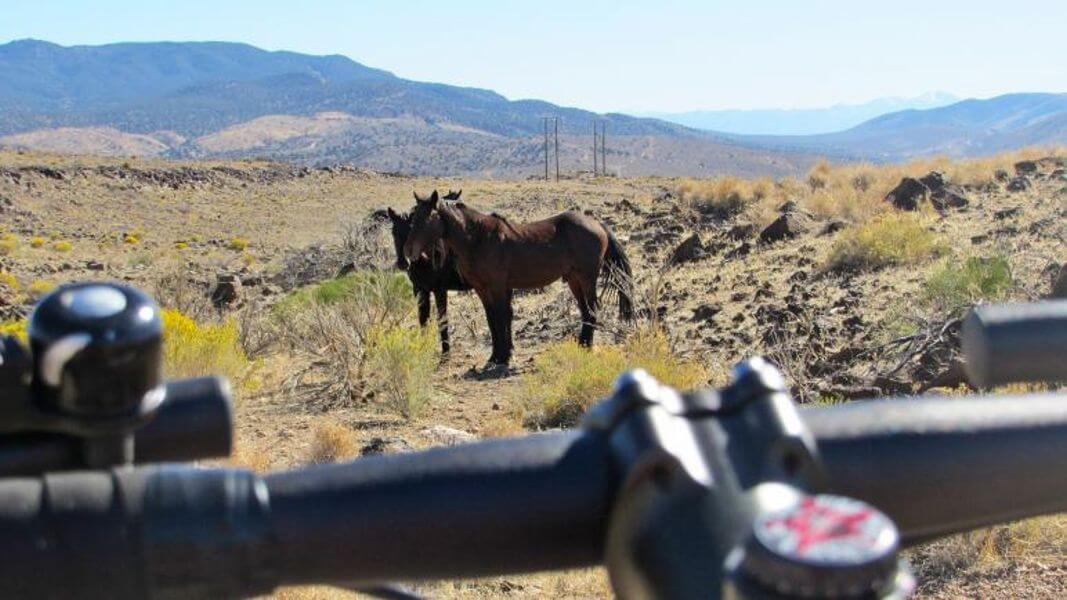 The next part of the route took us northeast, climbing up out of American Flat to the ridge above Gold Hill. Once up on the ridge, we followed the improved dirt road all the way down to Gold Hill on Route 342. You would think that getting back on the pavement would be welcome, but this is the steepest part of the whole ride. We pedaled up past the Gold Hill Hotel, trying to ignore the allure of cold drinks inside. Later near the railroad track crossing, the road pitches up even steeper.

Thankfully there is a little known road after the railroad tracks that gives you some relief from climbing. Homestead Road is the first right hand turn after crossing the tracks. It's paved for a little while, then turns to gravel. It follows the contour of the hill, climbing gently over to the truck route (Route 341). Once at the truck route, it's another gentle climb into Virginia City. 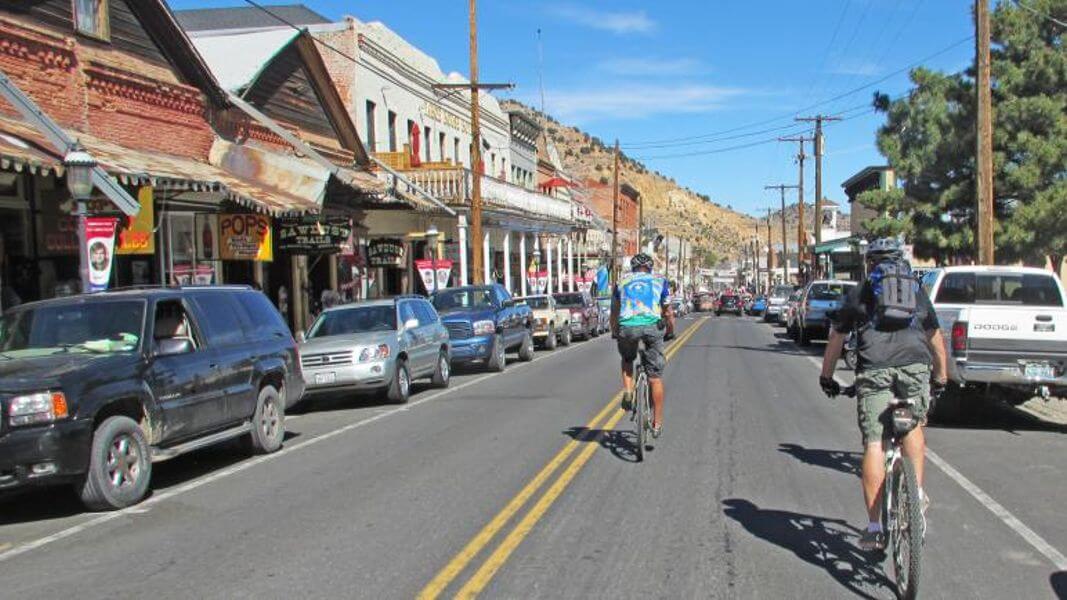 The first order of business upon arriving in town was a cold beer and pizza. Three of us rolled north through town, and picked up our friend Jason along the way. He had climbed much faster than the rest of us, and already had time to wolf down a sandwich at one of the restaurants! We went all the way to the north side of town to the Red Dog Saloon. This old building has a colorful past. It is said that in 1966 the house band was Big Brother and the Holding Company. Janis Joplin joined the band here and went on with it when it returned to San Francisco. Today it still has its old west charm, there are still great bands playing here, good beers on tap, and delicious pizza.

Another round of beers and pizza was sounding just right, but it was time to start our 12 mile return trip to the trailhead in Carson City. We started our climb back to the summit at Gold Hill. Riding through Virginia City is great. The traffic is slow on this two lane road, and there are people everywhere having fun. A bicycle is a fun way to get around this busy little mountain town.

At the south side of town, we opted to just go straight down route 342. While it's miserably steep coming up, it makes a thrilling descent coming down through the S-curves. We bombed the hill all the way back down to the turnoff to American Flat. 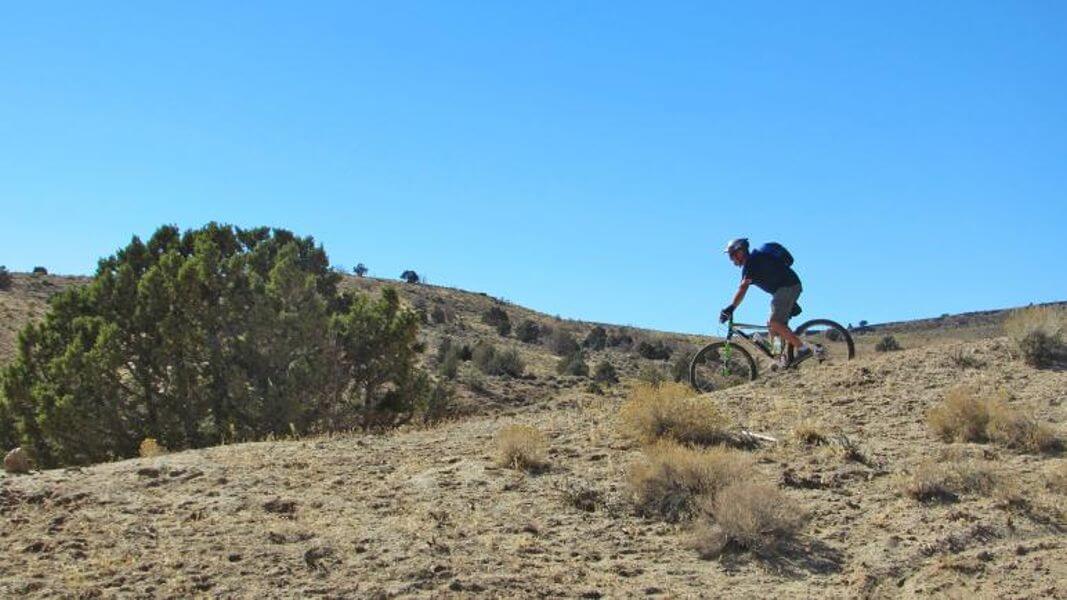 The gradual ascent back to the ridge above American Flat now felt pretty steep with our worn out legs. Once over the top we took the main road descending into American Flat, staying above the mill, trying not lose too much elevation. It was still a lot of climbing to get back to the toll road on the south side, but we just walked it when we got tired. There are more roads above where we were, and more exploration may be needed to find the best way back. It may be possible to avoid losing much elevation when crossing this valley.

We made it back to the toll road, and it was time for some fast and fun downhill all the way back to the railroad tracks in Mound House. We finished this section in a matter of minutes, quite a contrast to the time it took to ascend. Once at the bottom, it was just a quick climb over the pass for another fun descent back to Centennial Park.

Late Summer and Fall are a great time to do this ride, since the temperature is a bit cooler, and the trails are dry. Mileage can be customized by starting in downtown Carson City, the Centennial Trailhead, or even at the beginning of the American Flat Toll Road in Mound House. You could even just ride to American Flat and have a good time. For people looking for more adventure and miles, you can take Ophir Grade at the Gold Hill summit. This dirt road gives you access to many trails up and around McClellan Peak. †Whichever path you chose, you're sure to have some fun while enjoying Nevada's Old West experience.

Here is a GPX file of our route that can be opened in Google Earth. https://docs.google.com/file/d/0B8JHtRS9aZ4HZWVvcmNoQ2VudUU/edit?usp=sha…" target="_blank">Click this link to download and save.

Two Wheels and the Open Road