Numbness In The Neon

Growing up in Reno, Will Durham had quite a case of insomnia. So much in fact, that his incessant chattering persuaded his brother to move into another room to secure some shuteye. And, growing tired of counting sheep, Will turned to the unfiltered, buzzing neon lights of downtown Reno that he could see from his bedroom window, comforted by the fact that there was action going on down there. He wasn’t the only night owl awake at such an hour, and the vibrancy of that unmistakable skyline solidified that notion.

That alone is probably pretty flipping safe to say across the board, there’s a gratifying numbness in the neon. Sure people are drawn to downtown Vegas and Reno for gambling and its wild, unrestricted spirit, but there’s totally something to be said about those magnetizing lights. All of its humming glory cascading over you with a distinctive vibrancy and animation makes you feel alive yet comforted. 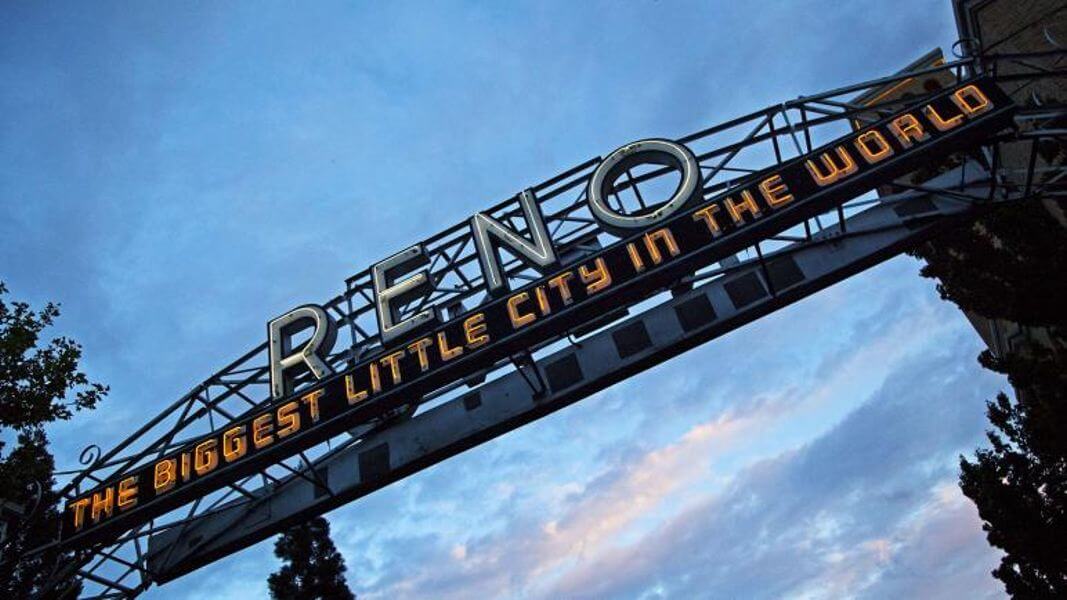 Will made it through a sleepless adolescence and seriously began collecting neon signs by 1990 after recognizing their tremendous historical importance. Just like old cronies, Will was disturbed to see such important snippets of Reno’s history being destroyed overnight. Something that he had essentially created a relationship with was being smashed into dumpsters and replaced by the next big trend in lighting.

So, just like that, Will started saving one sign at a time, and today owns quite an extensive and quirky collection of these babes. Perhaps the largest known private neon collection in the United States, Will’s managed to get his hands on over 60 complete signs…some even spanning over 50 feet in height. How many people can say that about their collection obsession? 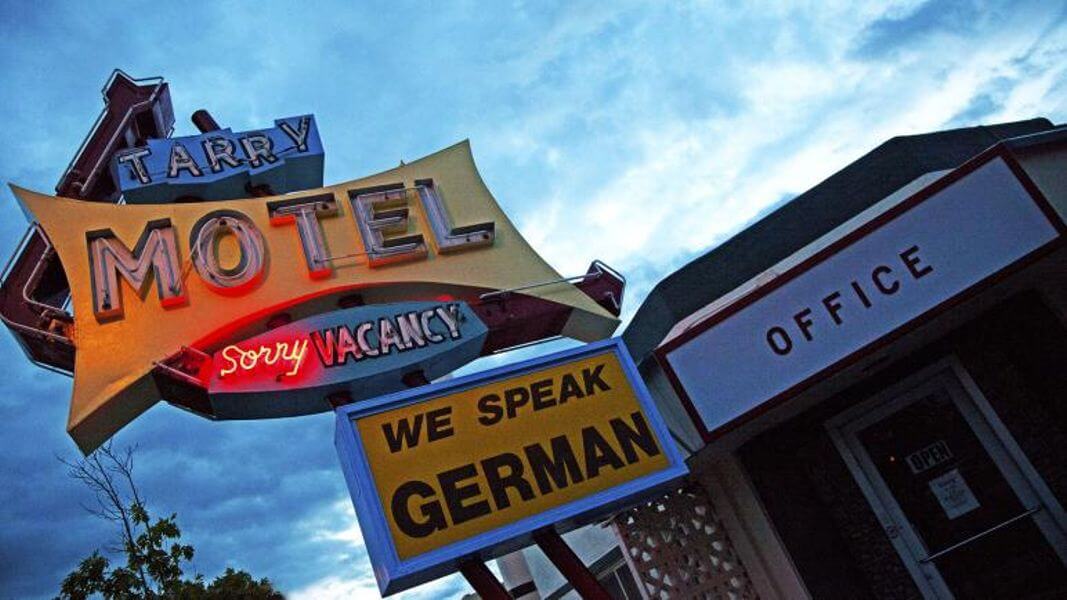 Inspired by and focused on the crazy-amazing neon that decorates Ely and Elko’s main drag, all it took was a short phone call with Will to remind me that an array of bad ass neon sits right in my backyard, I’m just immune to it in a sense. It’s so available all the time that I don’t see how spectacular it all truly is.

And guess who got a personalized crash-course reminder of the Biggest Little City’s sizzling signage with Mr. Will Durham himself? ME. It’s alright, you can be jealous.

With pretty accurate tabs on exceptional neon in the Reno–Sparks metro area, we were off and running on a warm May evening. After making it through the first few stops, I quickly realized what my first mistake was: not truly grasping what the good stuff is. Spending much of my own adolescence in Reno, some of the remarkable gems through the area are clouded with backlit marquees or signs with flashing bulbs…NOT real neon.  Making our way through a series of stops along Virginia Street, Will showed me several signs that were downright dynamite before snaking our way through the legendary Fourth Street. 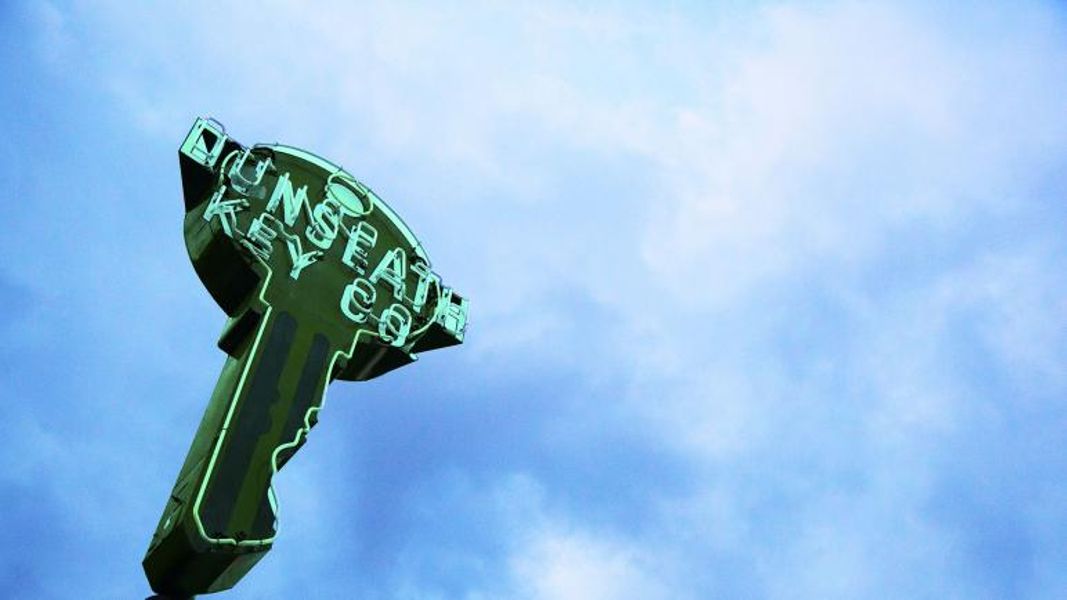 As a recap for those of you not familiar with this paramount portion of road, the Lincoln Highway [America’s first transcontinental highway, I-80’s predecessor] and Reno’s Fourth Street overlapped as one stretch. As the main artery of traffic to the area, most of the iconic motor lodges, bars and fueling stations peppered this section. And what did these popular businesses use a tool to knock people’s saddle shoes off and make them swang their Chevy Bel Air’s into the parking lot? Loads of the most incredible neon you can think of, absolutely artistic stuff. 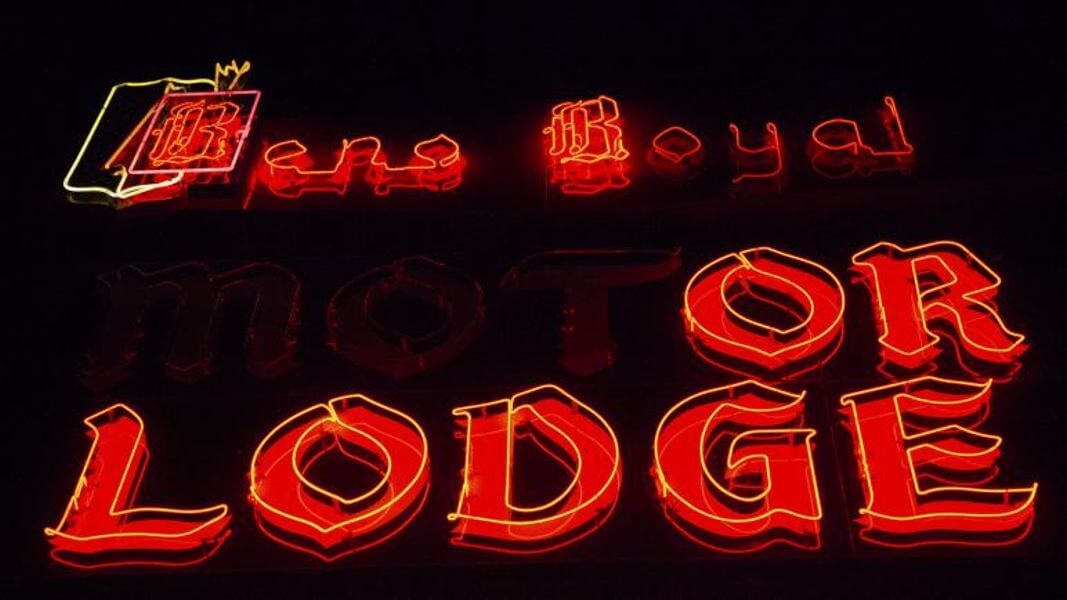 The best part about it is that while many other American cities used neon in signage pretty seriously until the 1950s, it faded away everywhere else but continued to happen in Reno’s flashy city limits. Luckily, many of these pockets of history are owned by Will, or are still up and running ‘in the wild’ for people to check out. And chances are, Will probably already owns those too. Rest easy, history buffs.

Showing me some of the incredible finds I would’ve otherwise ignored, Will paraded me up and down Fourth and Virginia Streets, sometimes double backing for a second look. Contagious enthusiasm doesn’t even begin to describe Will’s interest in this stuff. It wasn’t just a plain old sign, it was a piece of our past right in front of us…a mighty artistic piece at that. How many people had passed beneath its murmuring magnificence in the past 60 years? And how long did it take to create something that masterful? The craftsmanship for something like that today is certainly absent to say the least. Many are uninterested, but man, this was some cool stuff worth a second, third or fourth look. 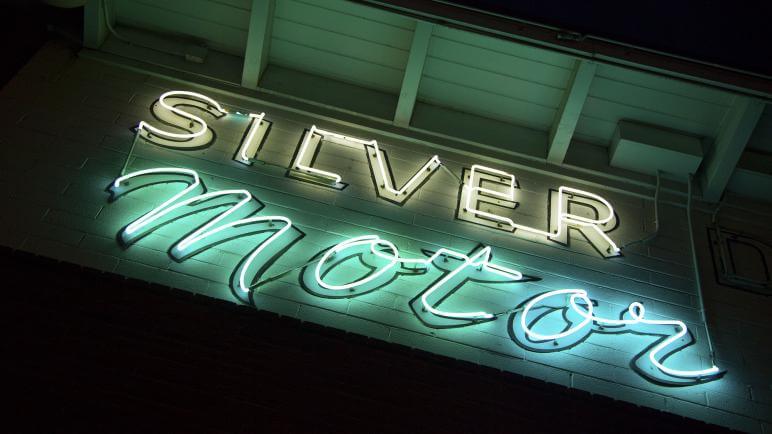 The best part of the night went down when Will paraded us by the Copenhagen Bar on Sparks’ Prater Way. Dropping me off to shoot photos galore, this dramatic façade pulled him out of the car too, prompting him to snap a few pics of his own. Just goes to show you that even if you’ve got every amazing location cataloged front to back and back to front, there are a few details even such an expert like Will needed reminding of. 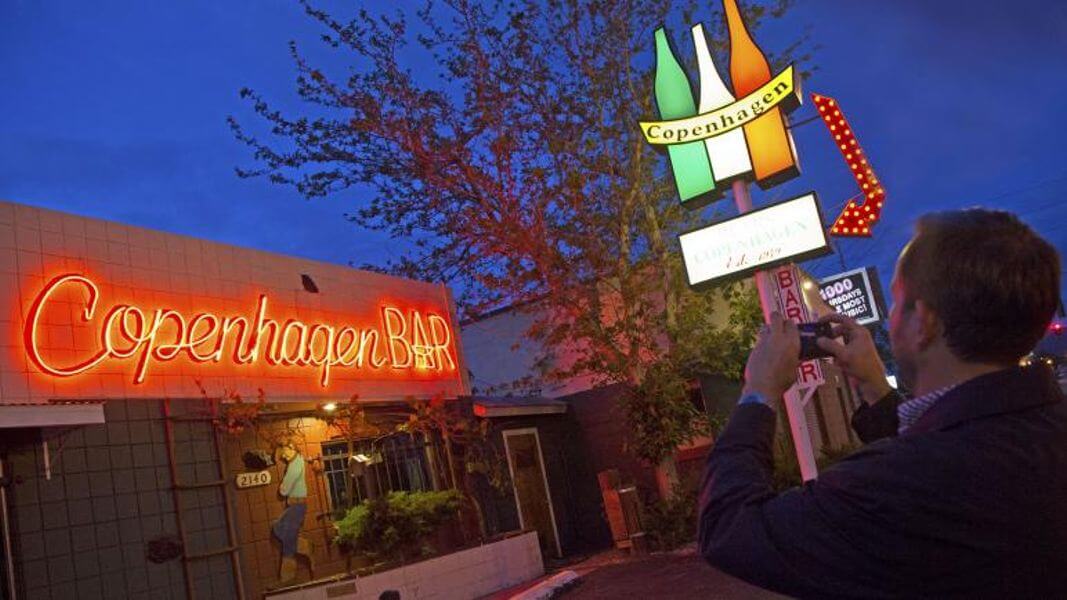 After my perception underwent an extreme makeover, Will laid out the rules of the road when it comes to finding good neon…

1. TYPOGRAPHY. The letters can’t just be basic and the beauty is, most of them aren’t. Challenging fonts and interesting loops and swoops are what can make or break the interest level in one of these beauts. 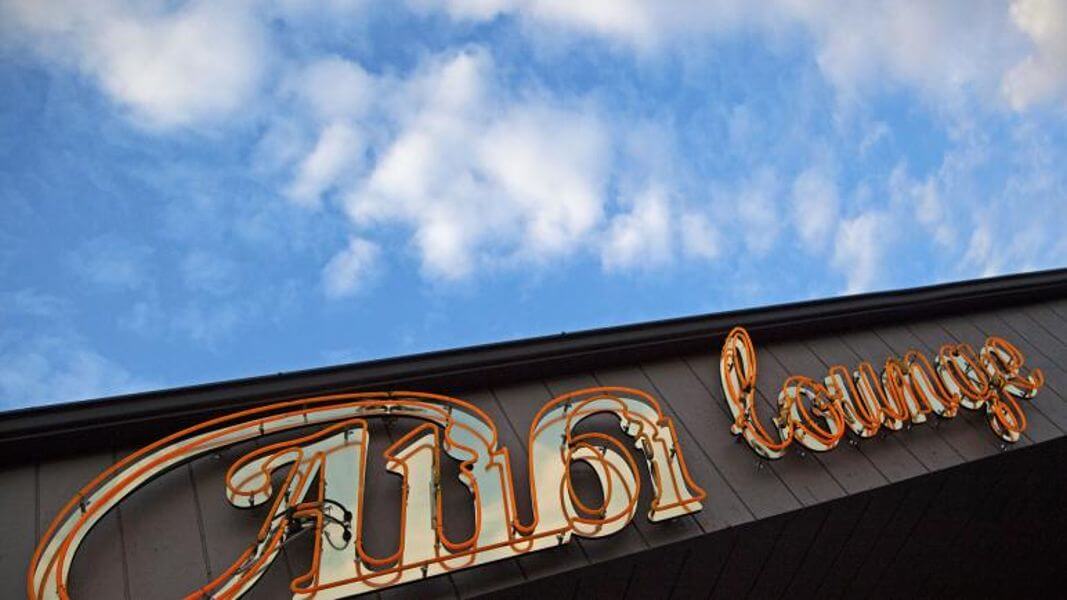 2. COMPOSITION. What’s going on in the sign? Is it straight neon or are there other interesting elements? What sort of name does it have? Will pointed out that all of this totally matters. Who wants to read a sign like ‘THE HOT DOG STAND’ in neon when you’ve got a gem like Beefy’s right in front of you. It’s cool! And when you can use neon and pair it with blinking bulbs or even a backlit sign, now you’re working with something. 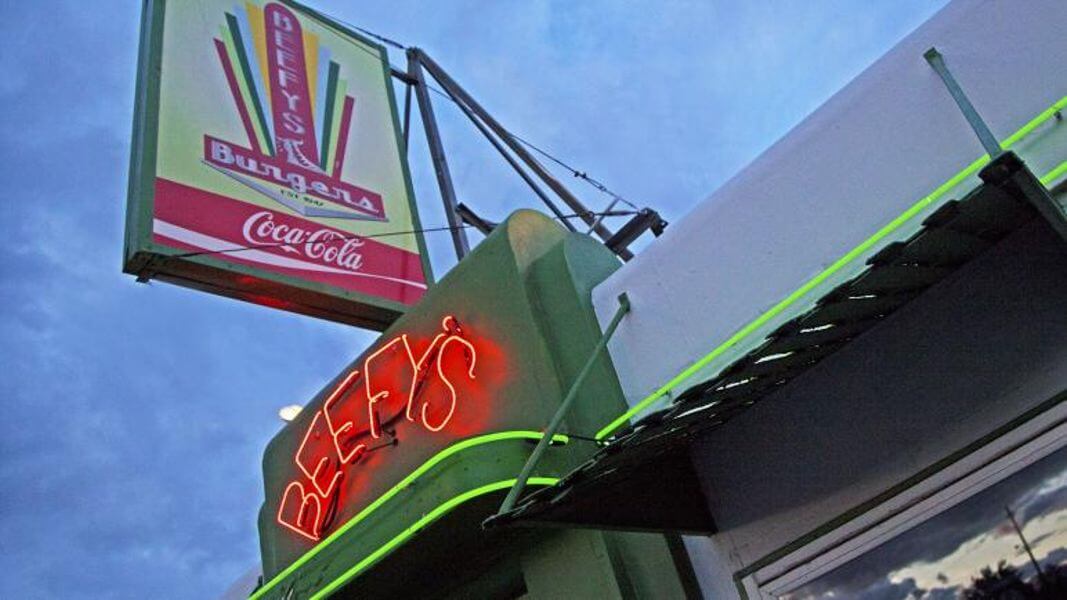 3. VARIETY OF COLOR. Some of the best little dittys have color, a kaleidoscope of vibrancy and that alone can totally pull you in. Maybe some other interesting elements happening there, but if a variety of color is present it makes the sign a no-brainer slam dunk. 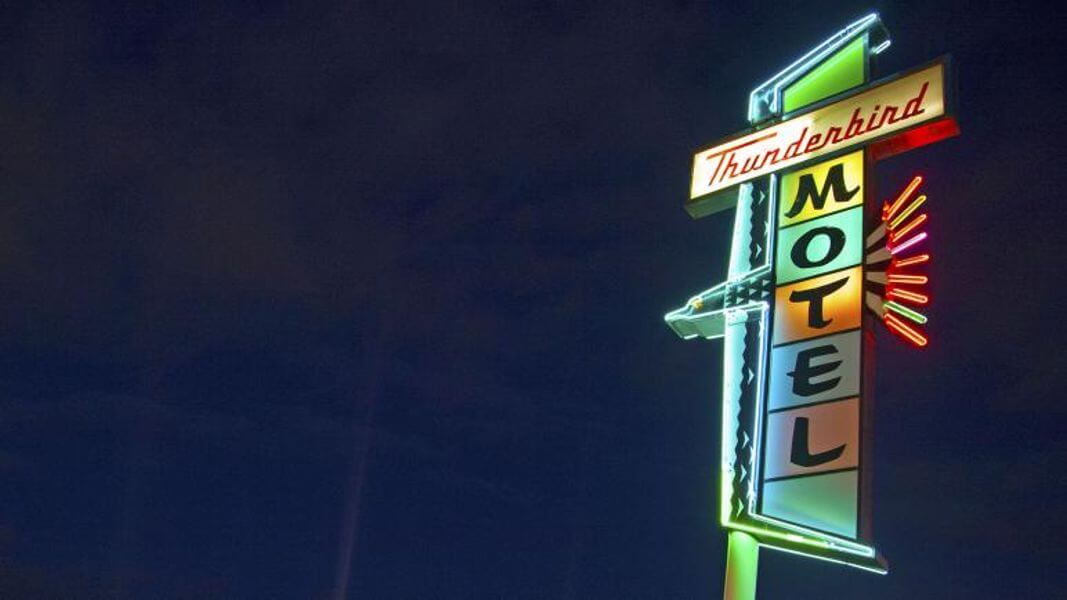 4. ANIMATION. Some of these sign-makers back in the day completely mastered colors, composition and typography, so they of course kicked it up another notch and incorporated animation…making it that much freaking better. With some local favorites like the Merry Wink Motel, its neon sign actually winking in neon animation at every passerby is impressive to say the least. 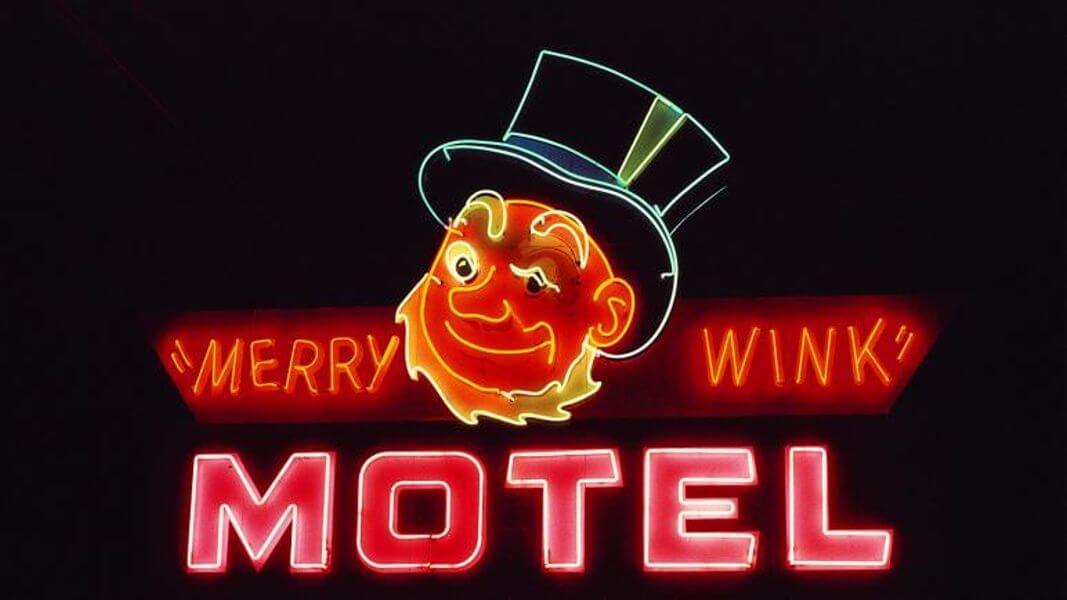 5. FIGURES AND SHAPES THAT ARE INCORPORATED INTO THE TEXT. While all the other components of ‘good neon’ are completely important to Will, this one is his favorite component to hunt for when scouting out killer neon banners around town. If a letter can incorporate some sort of figure or shape that the establishment or area represents it’s knocking it out of the park in every way possible. The A in the word BAR shaped as a cocktail? Ideal. 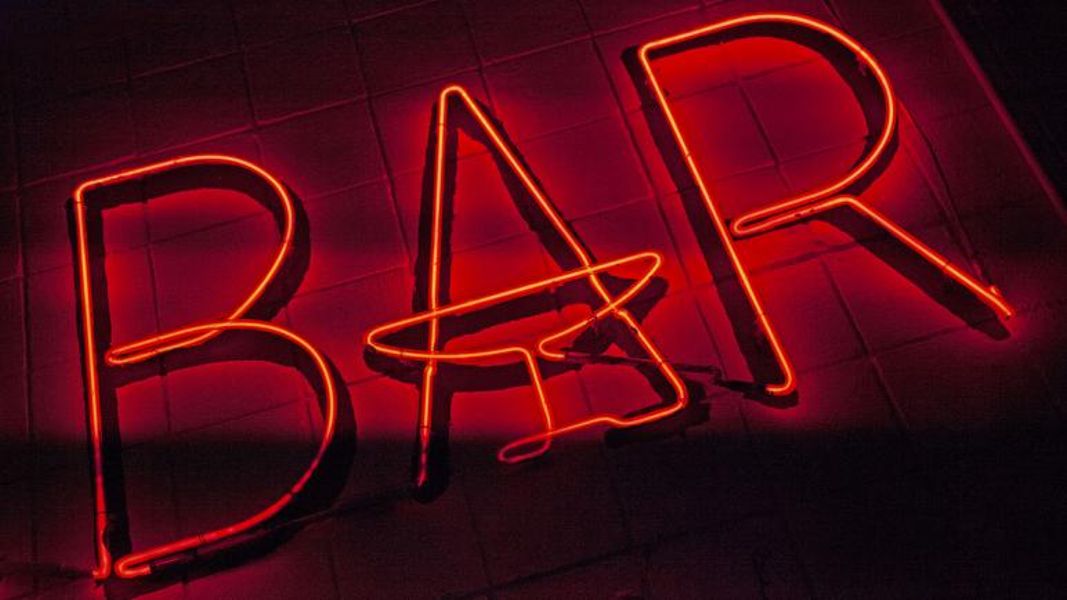 Annnd, if it’s got all of these? Forget about it. Total home run. The best part is, they totally exist, and are living in Reno.

With what seemed like hundreds of locations throughout town, I had seen them before without really seeing it. Now I knew what I was looking for, and best yet, when I found it I knew how to savor it. Swooping text connecting each zippy letter to another, electrifying animation and figures and shapes incorporated into the text are what changed it all. I started as a passenger but became immersed more and more in each location…it became personal, just as it unfolded for Will many years ago. 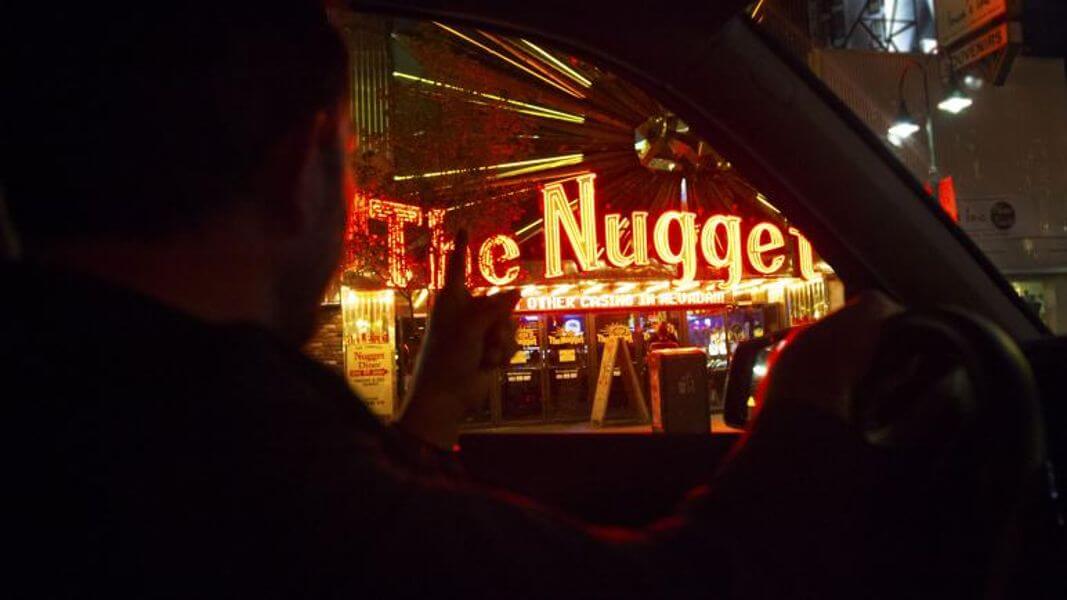 Not only was I able to take note of some incredible remnants of Reno’s colorful and unavoidably vibrant past, but it became so easy to become whisked away into another place at the feet of these buzzing beauties. It seemed to quiet the bustling activity around me physically and mentally, creating this awesome little happy place—an addictive numbness—I never knew existed. If you’re searching for humming comfort in these unavoidable signs, wanting to get in touch with an important slice of Reno’s past, have a hankering for some incredible photos, or maybe just need a little reminder of the beauty in your own city, all it takes is a slow drive through these impressive avenues and no real agenda. Take a few minutes out of your evening sometime, I bet you’ll be surprised with the killer stuff you’ll find. You might even cross paths some old friends you forgot existed.

An Evening With the Lady In Red

Getting Buzzed on the Nevada Neon Scene

WADING INTO WEIRD AT THE ONE AND ONLY THUNDER MOUNTAIN

18 Ways To Earn Your Stripes On The E.T. Highway

THAT NEVADA NEON, THOUGH