Las Vegas is chock full of attractions. It’s not all just slot machines, flashy hotels, and questionable decisions. Las Vegas attractions range from powerful displays of choreographed water jets to the massive choreographed performances of Cirque du Soleil. Whether you’re taking in the strip or nostalgically reveling in the original Fremont Street experience, this city is bound to leave an impression.

Las Vegas Attractions on the Strip

The Las Vegas strip is one of the most recognized portions of boulevard around the world. It’s a 4.2-mile concentrated stretch of grandiosity, which can seem overwhelming at times, but in the best of ways. Extravagant hotels line the streets, and the neon alone is enough to keep your eyes busy for hours. But it’s also home to some of the most famous Las Vegas attractions, and there’s far more than the view to sink your teeth into. 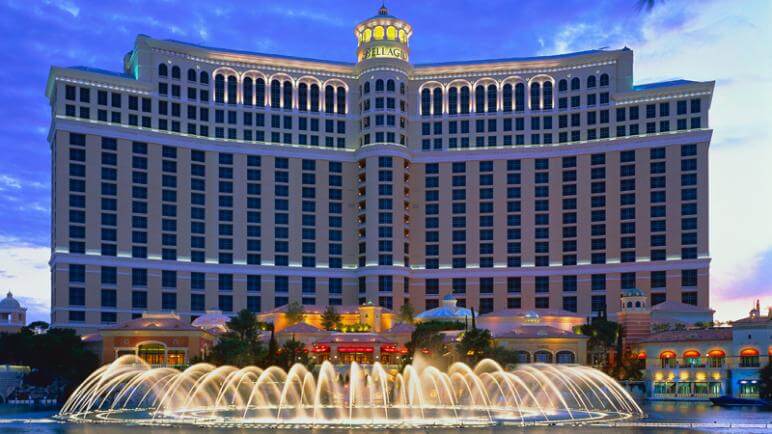 One of the most captivating Las Vegas attractions, the Bellagio Fountains put on their show for anyone willing to watch. And you will want to watch. It’s a choreographed display of more than 1,000 jets shooting water 460 ft into the sky. That’s impressive enough, but all this happens in sync to a wide selection of music ranging from classical to pop. Take all that, add in 4,000 individual lights putting on their own synchronized show, and that’s the whole enchilada. If you’re looking to catch the show, the fountains do their thing every 30 minutes starting in early to mid-afternoon. In the evening, shows take place every 15 minutes and go till midnight.

After watching the fountains, you’ll want to head into The Bellagio to see yet another of Las Vegas’ attractions, The Bellagio Conservatory and Botanical Gardens. The garden is a 14,000-square-foot display of floral variety and horticulture that changes with every season.

According to the Bellagio, it’s a celebration of the casino’s commitment to the Earth. To further that end, the Bellagio recycles 90 percent of the plants when the display rotates.

Caesars Palace is one of Las Vegas’ most recognizable hotel resorts. Its architecture and grounds are inspired by Italy, and it has the Roman Columns to prove it. Inside the casino, a vast, multi-level shopping mall makes up what the casino terms “The Shopping Wonder of the World.” The mall includes 160 specialty shops including Louis Vuitton, Versace, Giorgio Armani, and the like.

Next to Caesars Palace, and in true Romanesque fashion, stands The Colosseum. This venue is known for the many world-famous artists that have performed there. If you’re planning on seeing a show here, you’ll want to purchase your tickets well in advance, as shows often sell out.

If you’re looking for Las Vegas attractions that won’t cost you an arm and a leg, then look no further than the Mandalay Bay Shark Reef Aquarium. The aquarium features more than 2,000 animals, two walk-through tunnels, and 14 different exhibits. Visitors can see sharks, giant rays, endangered green sea turtles, piranhas, and even a Komodo dragon.

Looking to take your experience to the next level? The aquarium offers feeding and diving experiences, including a “Dive with the Sharks” experience. 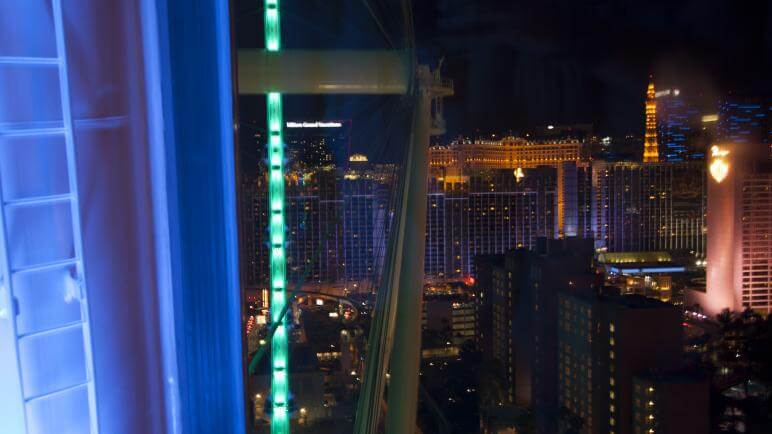 Among the tallest of Las Vegas tourist attractions, The High Roller Observation Wheel in the LINQ Promenade holds the title as the world’s tallest observation wheel. Visitors can enjoy 360-degree views of the strip from 550 ft in the air. You can even enjoy a drink from one of the open bar cabins as you soak in the sights.

The LINQ Promenade is an outdoor plaza and contains shopping, dining, and nightlife offerings.

Speaking of tall Las Vegas tourist attractions, The Eifel tower is a hard one to miss, with its 540ft height and many lights. An elevator gives guests the chance to ride up 460 ft to the observation deck, offering a unique view of the strip and other landmarks. Additionally, there is a restaurant on the 11th floor that is open from 10 am to midnight.

There’s a trend in Las Vegas when it comes to building tall structures, and this one takes the cake. Stratosphere Tower stands 1,149 feet tall and is the tallest, freestanding tower in the US. The tower offers an observation deck, rotating restaurant, and three thrill rides — Big Shot, Insanity, and X-scream. If you’re looking for an even bigger thrill, try the Sky Jump, which is described by the hotel as a “scream inducing leap off Tower from 829 feet.”

For the indecisive traveler, Las Vegas offers a small taste of The Big Apple. Complete with everything but an eastern standard time zone, the New York-New York Hotel and Casino has everything needed to produce a feeling of being two places at once. Visitors can wander versions of Times Square, Grand Central Station, and a 300-foot replica of the Brooklyn Bridge. They even have a miniature Statue of Liberty.

The hotel features more than 2,000 guest rooms, and since it has a roller coaster and arcade, is one of the great Las Vegas attractions for kids and families.

Cirque Du Soleil offers visitors a chance to experience one of Las Vegas’ most iconic events. The shows mix all of the beauty of street performance with the extravagance that Las Vegas is known for. Aerial acrobatics, dancing, and other artistic, stunt performances can be seen in a variety of shows. When it comes to Las Vegas attractions for couples, this event makes a great date.

Las Vegas Attractions Off The Strip

The strip is great, but when you find yourself asking what to do in Las Vegas, it’s best to evaluate all the options. 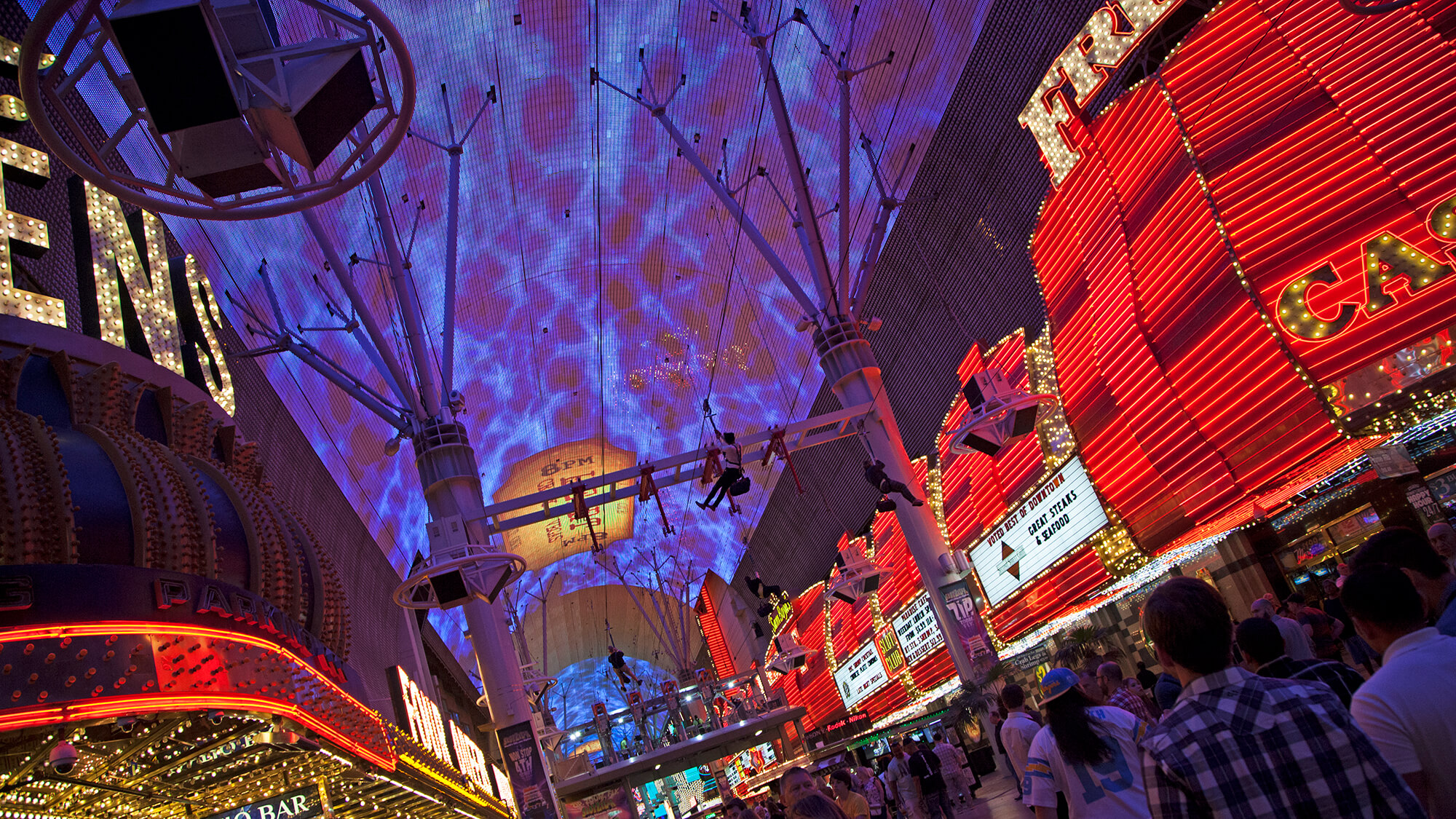 Just a few miles north of the Strip, visitors can take a step back in time to the original downtown Las Vegas. It’s home to many famous, and once famous, casinos. Fremont Street has been around since the beginning. It was the first paved street in Las Vegas, and dates to 1905.

It may be historic, but downtown Las Vegas offers lots for the modern visitor. The Fremont Street Experience is a four block walking street that is abuzz with lights and nightlife. Live events, shows, nightlife, and dining seem anything but old. Viva Vision light shows are a must see that transforms a canopy over the Fremont Street Experience into a giant screen for another spectacular light show.

Las Vegas and neon go hand in hand, so it only makes sense that downtown Las Vegas would also be home to The Neon Museum. Founded in 1996, the museum is dedicated to preserving the history of Las Vegas signs. The main exhibit, known as The Neon Boneyard, features old neon signs and offers visitors the chance to explore the history and culture of Las Vegas.

Located near downtown Las Vegas, the National Museum of Organized Crime & Law Enforcement, aka The Mob Museum, offers exhibits that give visitors an insight into the history of organized crime and the battle between law enforcement and the mob. Exhibits include speakeasies, Prohibition, and the birth of the mob, among others.

The Hoover Dam is one of Las Vegas’ most famed tourist attractions. It offers visitors a chance to get out of the city and see the 726-foot marvel of engineering that supplies power to cities in three different states. The Hoover Dam is located 30 miles from Las Vegas and offers guided tours. 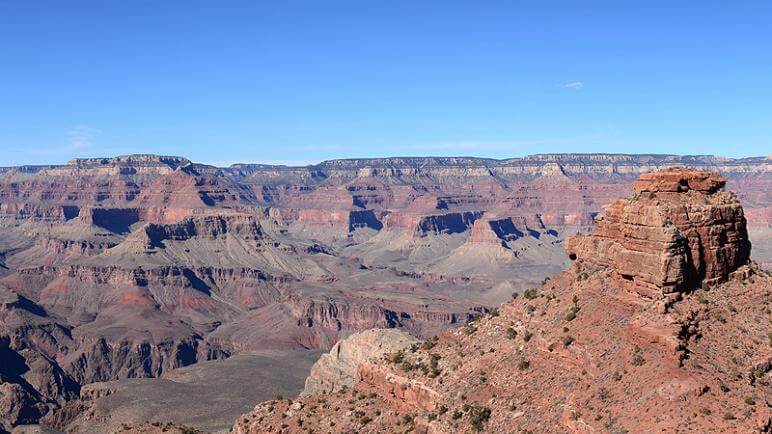 Visiting Las Vegas puts visitors in the neighborhood of another must-see attraction, The Grand Canyon. It’s about a 4-hour drive from Las Vegas, but it’s well worth it to view one of the Seven Natural Wonders of the World. If you don’t have time to drive, helicopter tour companies offer flights and excursions out of Las Vegas.

Red Rock Canyon is another one of Las Vegas’ attractions that’s outside of the city. It is only 30 minutes from Las Vegas and has 26 hiking trails through scenic views and desert landscapes. For the more adventurous, rock climbing and camping are also available in the park.

Tips for trips: Get there early, bring lots of water, be prepared for the heat and sun with sunscreen and protective clothing, watch out for dangerous desert animals, and plan your hike ahead of time.

GOLDFIELD: 15 WAYS THE PAST REMAINS PRESENT

Carson City: Your Next Near-Cation