As Nevada Magazine’s adventuring duo for more than five years, Editor Matthew B. Brown and I have covered more miles crisscrossing the Silver State in search of stories and photographs than either of us can rightly recall. Tens of thousands if I had to guess. While many of those miles are necessarily spent on highways, interstates, and other paved roads, we relish nothing more than the opportunity to leave the pavement and take a back road—luckily, Nevada has an abundance.

With spring upon us and summer right around the corner, there’s no better time to share some of our favorite backcountry roads so you can take your own adventures and get a little gravel in your travel, too. 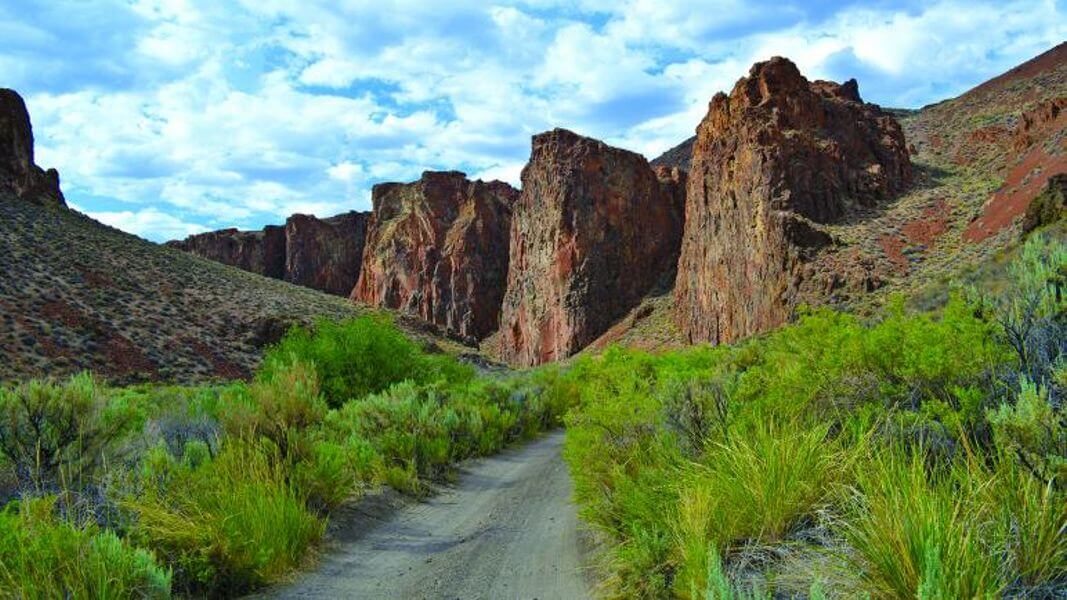 There are few places in the continental United States as remote as the northwestern corner of Nevada; even the handful of paved roads here make other dirt roads seem congested. The route from Gerlach to Sheldon National Wildlife Refuge covers about 75 to 120 miles, depending on your exact route, side trips, and how deep into Sheldon you venture. While the scenery and stops along the area’s maze of dirt roads are well worth the trouble, route finding can be difficult and tedious, and excursions here are not for the faint of heart or inexperienced backcountry travelers.

From Gerlach, Washoe County Road 34 leads northeast to various Black Rock Playa access points. If the playa is light in color (almost white) driving onto the freeway-smooth surface is a lot of fun, but if it is tan to brown in color, stay off; this means it’s wet and you will get stuck.

The main road continues north of town about 12 miles to a fork at Soldier Meadows Road, where a right turn follows the western edge of the playa north to Mud Meadow Reservoir and Soldier Meadows, about 40 and 45 miles, respectively. A left, on the other hand, leads past Fly Geyser and to High Rock Lake and Fly Canyon. While route finding is a little more difficult on the second option and total mileage is a greater (about five extra miles), Fly Canyon is well worth the added time.

Past the canyon, the alternate route rejoins Soldier Meadows Road and continues north about 10 miles to Summit Lake and the Summit Lake Indian Reservation. The road through the reservation is only tenuously open to non-tribal members, so it’s a good idea to be respectful of the tribe’s land and make your visit short. Past the reservation the road continues seven miles to Sheldon National Wildlife Refuge. The main road through Sheldon leads about 40 miles to State Route 140 and is well graded, while several rugged dirt tracks meander through the refuge. 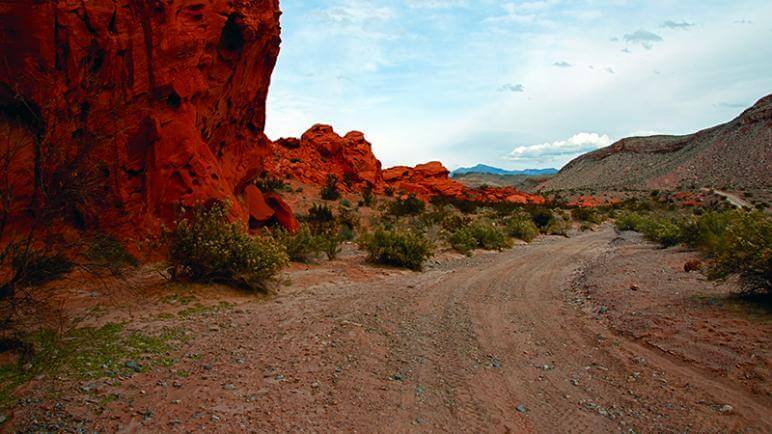 Many stories in Nevada Magazine are the products of Matt’s and my dirt-road adventures; it is far less common for a story to be cause for such a trip. But after running a story about Little Finland in the May/June 2012 issue, we could not resist a visit of our own. Not to be confused with the Scandinavian nation, Little Finland (also known as “Hobgoblin’s Playground” and “Devil’s Fire”) is actually named for the multitude of small fins amid its intricately shaped rock formations and, technically, Little Finland is just the most popular of the region’s several unofficial monikers.

Contrary to a local reputation for its roads being remote and rugged, most of Little Finland and its surrounds are actually relatively easy to reach with basic two-wheel drive and reasonably high clearance. From Interstate 15 west of Mesquite, exit 112 leads to State Route 170. A few miles from the interstate and just across the Virgin River, New Gold Butte Road twists and turns past ranches and through desert washes as it meanders along the Virgin River and western flank of the Virgin Mountains. The rough pavement ends about 20 miles from S.R. 170, just as the road reaches some of the region’s stop-worthy sites.

Signs along the well-graded main road indicate sites such as petroglyphs and Whitney Pockets, but Little Finland itself is not marked, and it is easy to get turned around amid the dry washes and red rocks of the area. From the end of the pavement, the turnoff to Little Finland is about seven miles. After a right turn off the main road, the route follows a good dirt path and a dry wash and passes beneath some impressive petroglyph panels on the steep rock faces above. 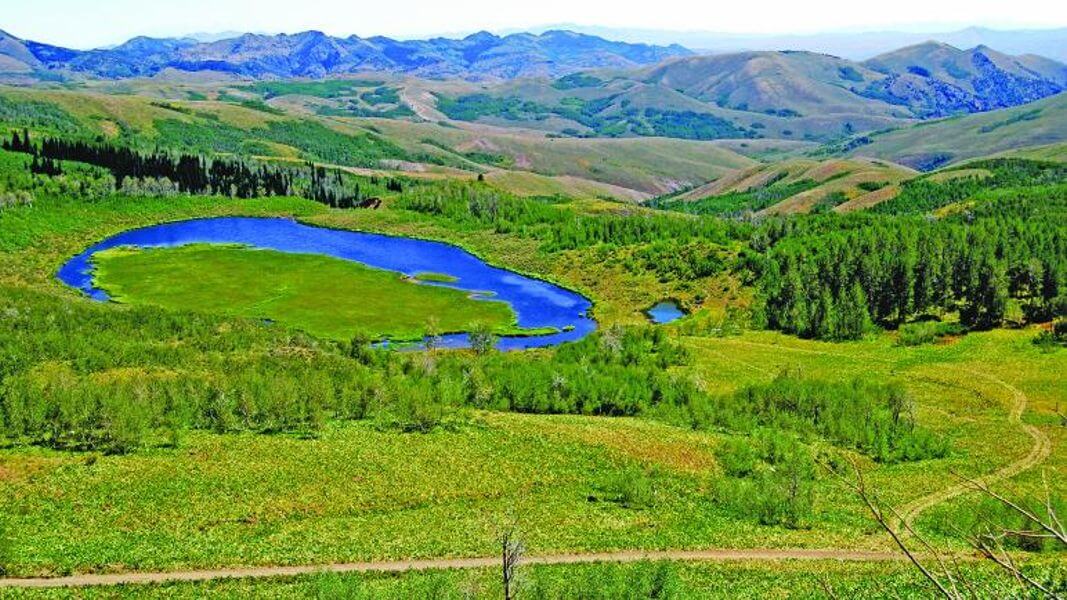 Ever since Jarbidge’s early days, the Nevada town has most commonly been accessed from the north by way of Idaho. Though the closest paved road is the Spud State’s Jarbidge Road—which still turns to dirt more than a dozen miles from the tiny canyon-bound community—the most scenic way to get to Jarbidge is to cut out our northern neighbor altogether. From State Route 225 north of Elko and Interstate 80, Elko County Road 746—about eight miles south of Wild Horse Reservoir—travels east along the farthest upstream reaches of the Owyhee River and to Charleston Reservoir, about 21 miles.

Winding through quintessential Nevada cow country and climbing the lofty Jarbidge Mountains amid sweeping stands of aspens and breathtaking alpine scenery before descending sharply through pine forests into Jarbidge Canyon, the route is one of Nevada’s most scenic stretches of road—dirt, paved, or otherwise. From the often-dry Charleston Reservoir, a left turn on Jarbidge-Charleston County Road leads six miles to the ghost town of Charleston. The crumbling former homestead shows signs of attempted improvements in recent decades and is worth a little exploring.

Past Charleston, the road turns right at a handmade sign and starts its long, roughly 14-mile ascent up the southern flanks of the Jarbidge Mountains, where sheepherders, their camps, and their enormous flocks are common sights. Since the road climbs to more than 8,500 feet before dropping down the northern side of the range for the remaining eight miles into Jarbidge, it is impassable when snowy conditions are present, which is often well into summer. 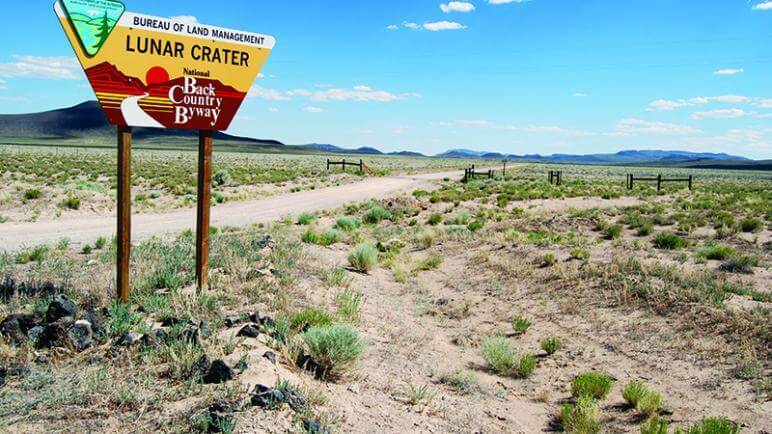 When I ask Matt to step out of the SUV and spot me on a particularly nerve-racking section of steeply down-sloping rock one afternoon in July 2010, I have an ulterior motive. While a second set of eyes for this tricky patch of trail will surely come in handy, I’m mostly worried that I won’t be able to pull it off and want to ensure that at least one of us can walk to the nearest patch of highway for help should I roll the vehicle.

We’re just east of the Lunar Crater Volcanic Field off U.S. Highway 6 in Central Nevada, cautiously negotiating a trail near the backside of a steep rock formation called “The Wall” and already too committed to the route to safely turn around. A couple of tense maneuvers, some excited hand gestures from Matt, and more than a little luck gets us safely past the obstacle as we breathe a sigh of relief and commend the surprisingly surefooted Toyota RAV 4 on a job well done.

While the descent is nothing short of a harrowing rock-crawling adventure, Lunar Crater is actually accessed by way of the Lunar Crater Back Country Byway, which is straightforward, well signed, and wholly navigable with a two-wheel drive vehicle. The well-graded, 24-mile byway meanders through one of Nevada’s most unique landscapes: a long-inactive volcanic field of craters, cinder cones, and ancient ash and lava flows. NASA actually used the area in the 1960s to train Apollo astronauts because its remote, eerie moonscape of decaying volcanic craters simulates so well the geology they could expect to encounter on the lunar surface.

The “back way” into Spring Valley State Park is the Mt. Wilson Back Country Byway, accessible via U.S. Highway 93 at the Pony Springs Rest Area. But the best gravel adventure to be had in this remote and striking corner of eastern Nevada is the back way to the back way.

South Highline Road, about a half-mile north of Lake Valley Summit on U.S. 93, leads to White Pine County Road 47 and the backside of the Fortification Range. The piñon-clad eastern slope above the road is a succession of imposing volcanic cliffs, spires, and buttresses that beg to be explored and camped beneath.

About 24 miles farther south and well into Lincoln County, White Pine County Road turns into Atlanta Road, which supposedly accesses the ghost town of Atlanta; though all Matt and I found in the vicinity were the portable offices of a current, active mining claim. Unfound ghost towns notwithstanding, the road pleasantly winds up the northern flank of the Wilson Creek Range past abundant pine trees and aspens before descending the western side of the range and joining with the Mt. Wilson Back Country Byway after about 14 miles.

A sharp left turn onto the byway leads back up the western side of the mountains, again through pine forests and aspen groves. The road quickly climbs to more than 8,000 feet, affording superb views of the White Rock Mountains and Camp Valley to the east. The road descends through open range (keep an eye out for cattle crossing, sitting in, and relieving themselves on the road) into Camp Valley and continues south to Spring Valley State Park, about 35 miles.

“Man, that sucks,” I mutter while passing a pair of men hunched over a shredded tire along a desolate dirt grade in the Sage Valley northwest of Lovelock. I scarcely realize I’ve even said it aloud until Matt starts laughing at my uncouth and painfully obvious statement. But I was right; it did suck.

And no more than an hour later, we are reminded just how much as we find ourselves hunched over our own flat tire amid the ruins of Tunnel Camp. A century before our July 2012 excursion—literally to the day—a massive flashflood washed the town and several of its neighbors down the hillside, killing nine and crippling the Seven Troughs Mining District. Debris from the tragedy remains scattered across the desert and is likely the culprit behind the region’s notoriety for inducing flat tires.

Matt and I, however, have been lucky. Thanks in no small part to the expertly maintained vehicles provided us by the State of Nevada Motor Pool this is only our second dirt-road flat. The other occurred in May 2009 just minutes before a thunderstorm near Lexington Arch at the remote southern end of Great Basin National Park and may or may not have been the result of a less-than-friendly encounter with another hiker. Both occasions have taught us to always carry a spare, park on flat ground whenever a spot begs to be explored more closely and on foot, and ignore hikers who cut through switchbacks on trails—even though they are contributing to erosion… #NVRoadTrip

18 WAYS TO EARN YOUR STRIPES ON THE ET HIGHWAY

Wholesome Not Lonesome: A Journey Across Nevada's Highway 50

Anything But Lonely On Nevada's Highway 50

Laughlin: One-Nighter On The River