Helicopter Skiing Desert Powder in the Heart of Nevada

Helicopter rotors throb overhead. Snow crystals beaten by the powerful downdraft of the Astar 350 B3 aircraft erupt into a reverse snowstorm, ascending into the brilliant blue sky above the Ruby Mountains.

Our group of four is kneeling in deep powder, hunched against the rotor wash as the helicopter touches down. Carefully, we pass skis and snowboards to the guide and then pile into the back of chopper. The rotors whine as they power back up to full speed and suddenly we are airborne, levitating over the steep canyons, leafless aspens and jagged ridges of the Rubies. Far out in the valley, the split-rail outlines of cattle ranches checkerboard the foothills. 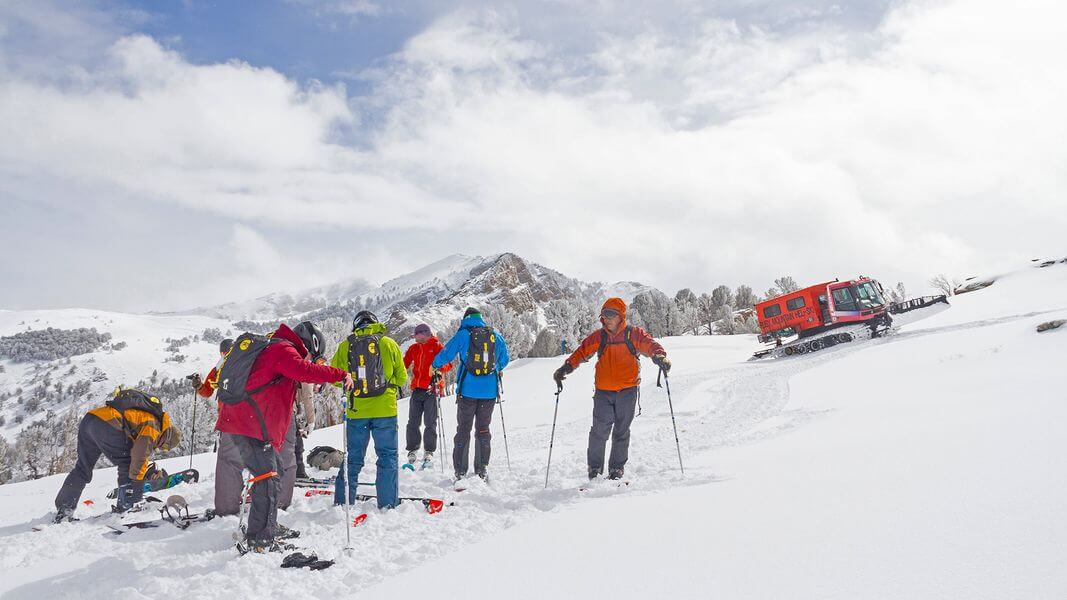 We fly up the contours of Conrad Creek, following one of the many northwest-facing drainages that crease the mountain range into rugged wrinkles.

This is not some powder dream, I have to remind myself. I am heli-skiing for the first time in my life, and it happens to be in the most improbable of locations — deep in the desert of Nevada in a remote, wild and intensely beautiful mountain range halfway between Lake Tahoe and Salt Lake City. 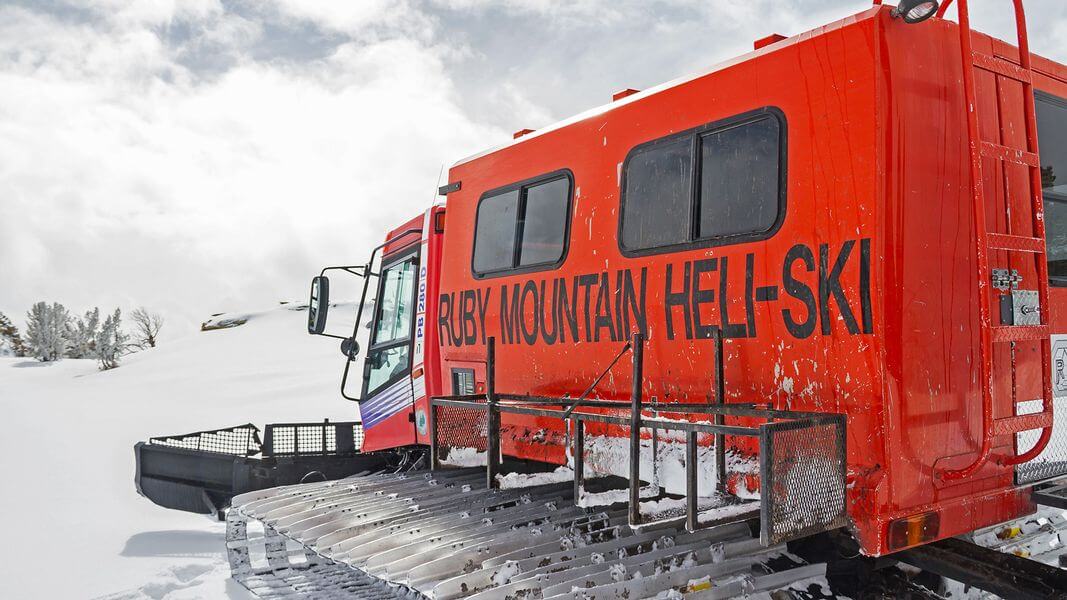 The helicopter slowly circles and then delicately touches down on a ridgeline, and we drop to the slope alongside the helicopter skid, gripping skis and snowboards as the helicopter takes off and whirls into the distance. As the thwop-thwop-thwop of the helicopter fades, utter silence envelopes us. We slowly realize that, apart from perhaps a couple of backcountry skiers in Lamoille Canyon, we might be the only skiers for hundreds of miles in either direction. 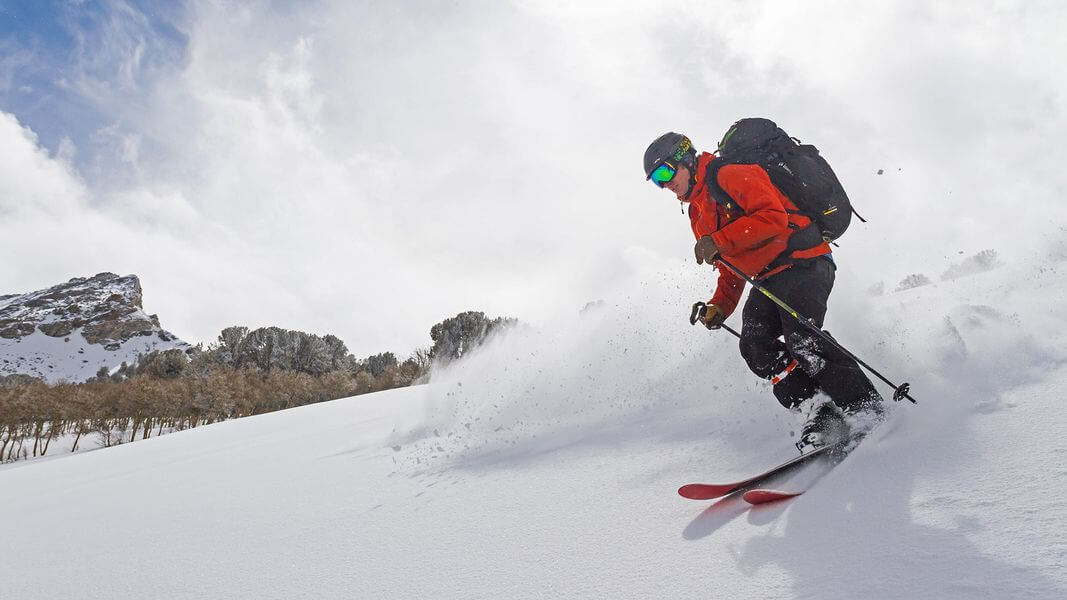 The guides talk us through the descent, test the slope, and then ski the line. And we follow, one by one, floating through pillowy light, untouched, Grade A Ruby Mountain powder. It’s what these mountains are known for among hardcore powder hounds. While pacific storms barrel into the Sierra Nevada laden with moisture laying down cream-cheese-thick “Sierra Cement,” by the time they have passed over nearly 300 miles of cold, Great Basin desert, that snow has transformed into low-density, light crystals. Cream cheese is fun, but Ruby Mountain snow is like skiing on feathers.

It’s my first time skiing Ruby Mountain Powder, and I am instantly addicted.

Ruby Mountain Heli-Experience has the feeling of a lavish family get-together — with a private helicopter and an entire mountain range of skiing thrown in for good measure. For 39 years, the Royers have been the heart and soul of the operation, and the number of visitors who return year after year means that most people around the table or shoulder-to-shoulder in the helicopter are familiar faces.

Joe Royer founded Ruby Mountain Heli-Experience 39 years ago. As a Snowbird ski patroller from Marin County, California, he would drive home from the Wasatch mountains through Nevada. Each year he looked south to the snowcapped 11,000-foot peaks of the Ruby Mountains. The mountain range drew him, and he began exploring the incredible skiing in the 60-mile-long range. By 1977, he had built the foundation of the helicopter skiing operation, and began introducing adventurous skiers to the remote, untamed slopes in the middle of Nevada. 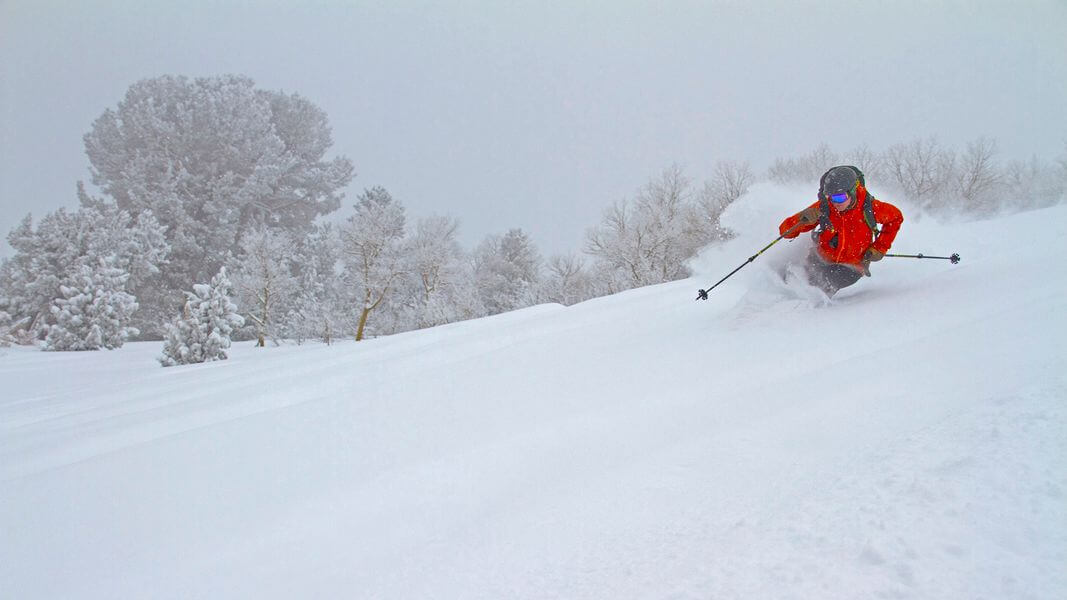 More than 30 years ago, Joe Royer met and then married Francy Royer, a talented pastry chef who had worked at some of Park City’s most respected restaurants. Their son, Mike Royer, grew up in the business, and now guides and helps with the operations of the company.

The combination of Royer talents and their natural warmth gives Ruby Mountain Heli its spirit. Joe is a legend in the heli ski world — a ski guide with four decades of experience, a talented ski photographer who has been published in ski magazines around the world, and a visionary who built the operation from the ground up.

Francy blows away even the most refined palates with her culinary creations. Ruby Mountain guides jokingly lament “Heli Belly” — the product of a winter of irresistible food —bacon-wrapped poached eggs and French toast in the morning, gourmet sandwiches and home-made cookies at lunch and lavish dinners in the evening. Dishes often feature vegetables hand-picked from her greenhouse.

Mike Royer is a rare second-generation heli ski guide who is equally comfortable guiding clients down the most challenging terrain in the Rubies or running the marketing operations at the company.

Snowbound in a High Altitude Yurt

After a couple helicopter runs, a strong snowstorm blows in and we trade the chopper for a snowcat. We fall into a rhythm. A long, untouched powder run through old-growth pinyons ends at the snowcat. We climb in, ear-to-ear grins plastered to our faces, and massage our weary quads while we climb back up for more. 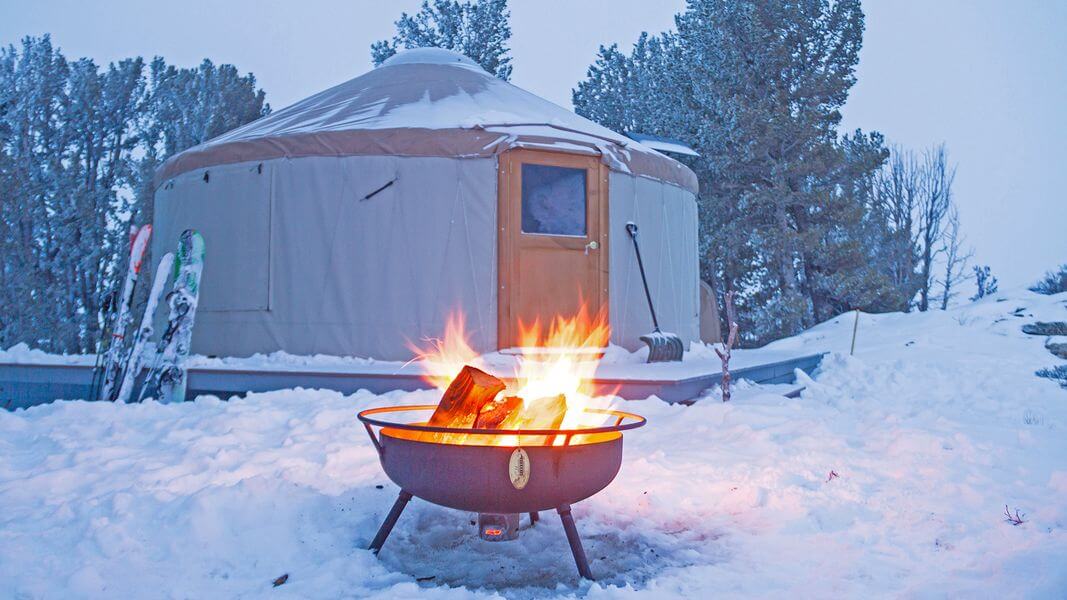 When the skiing day winds down, and the guests head back down the mountain for one of Francy Royer’s legendary dinners, we head up to a new backcountry yurt above Conrad Creek for a snowbound night.

The Royers opened this yurt in 2014 on 1,100 acres of land they purchased. Now, another, larger yurt sits at the base of the drainage, the beginnings of an emerging Ruby Mountain yurt system that they plan to continue to expand. They rent the yurt out to parties of backcountry skiers, offering them snowcat services and helicopter lifts if they like, or allowing them to explore the terrain on backcountry skis and splitboards.

Outfitted with plush furniture, a propane stove and a full kitchen, this is hardly roughing it. We crack open a bottle of whiskey, kick our feet up and chow down some dinner to the sound of the wind howling right outside the yurt walls. 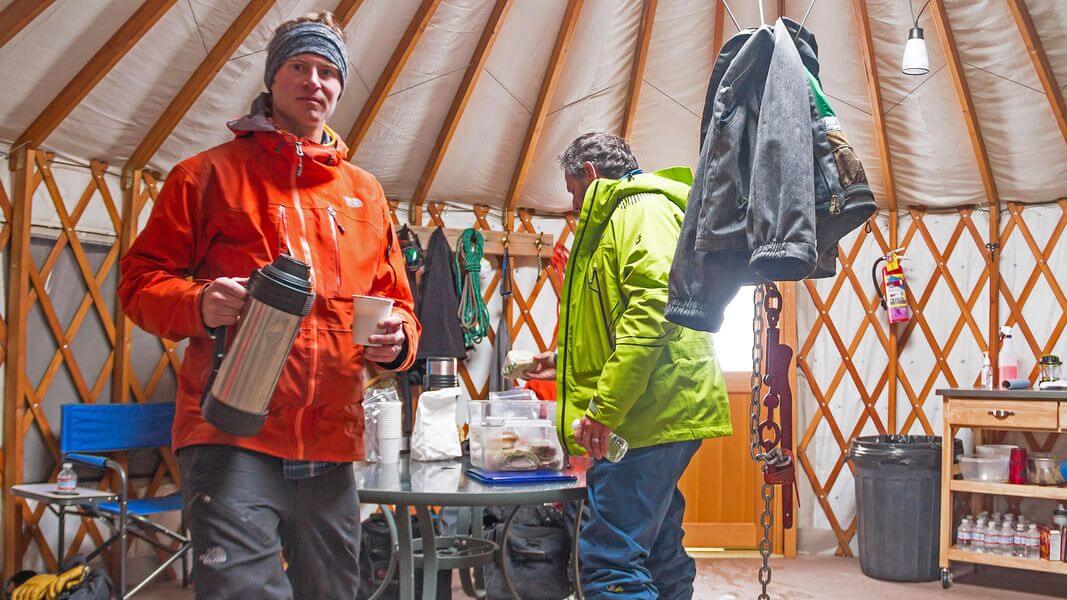 Caleb Merrill, our guide, shows us around the ridgeline, pointing out old-growth, wind-gnarled pines. We warm ourselves by the outdoor firepit for a time, gazing off into the corrugated terrain of Talbot Creek. When the whiskey starts to take effect, we retire for the night with the sound of snow softly piling up and then cascading off the yurt roof.

The next morning we rolled out of our sleeping bags into the stove-warmed yurt with an appetite for more powder. While I have stayed in backcountry yurts and huts before, I have never had the experience of waking up at the top of a ski line. A quick breakfast and we were outside in surprisingly deep snow, the only people on the mountain. We flip on our avalanche transceivers and drop into knee-deep snow, slashing turns between majestic aspens and regal piñons. 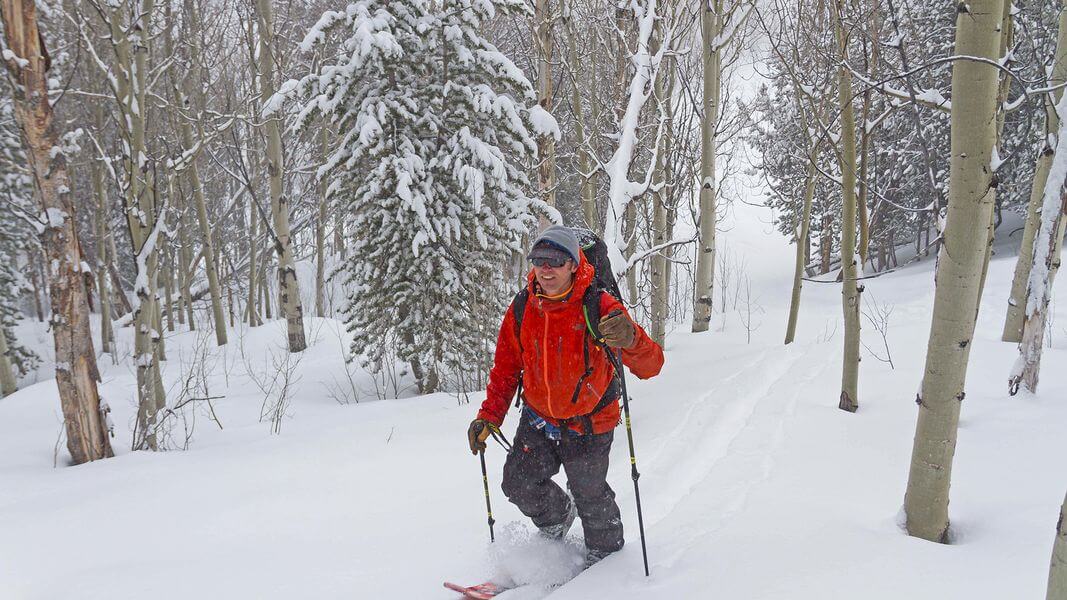 On the canyon floor we slap on skins and ascend back up the slope, our hearts pumping, breathe steaming, as we power ourselves back to the top for another dose of untouched powder.

After two runs alone in the canyon, the rest of the Ruby Mountain Heli group arrived on the mountain. With snow still falling hard, we skied progressively deeper and deeper powder, until our legs began to ache. 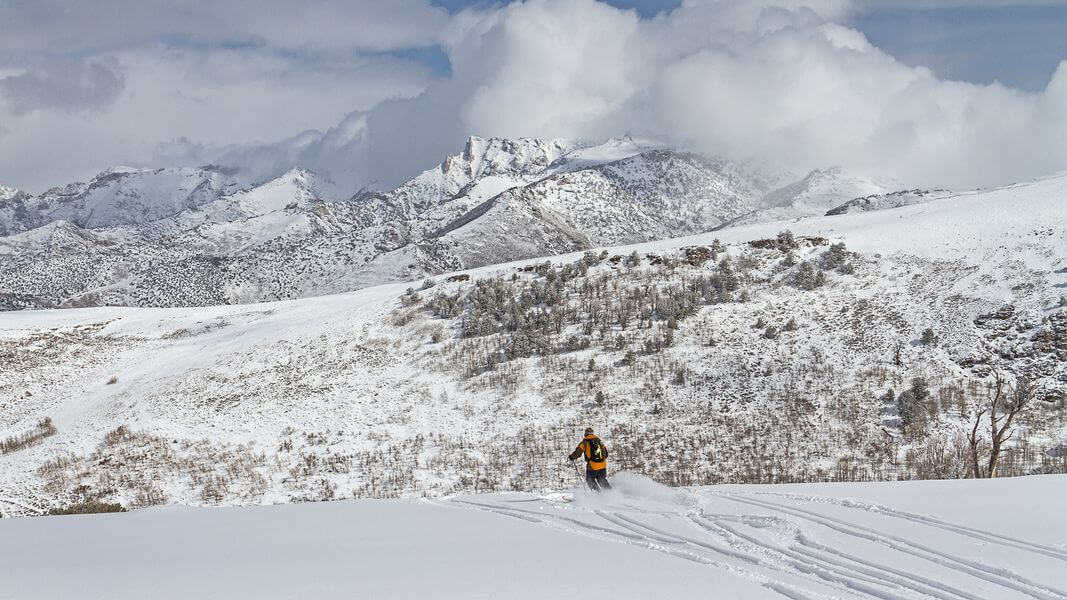 At the end of the day, the helicopter retrieves us. We chopper back to the lodge, unload our gear and crack open a beer. Our legs are jelly, but everyone is talking about tomorrow’s weather. The forecast calls for a bluebird powder day. Unfortunately, our time in the Rubies has come to an end. The next morning, as we motor down Interstate 80 toward Reno under brilliant blue desert skies, I can almost hear the whoops and hoots and hollers that have to be coming from the smiling mouths of the heli-skiers we left behind. I know they are floating through light, desert powder, making hero turns toward a helicopter waiting to ferry them back for more. #NVAdventure

SKI THE DESERT: How To Earn Your Turns In The Nevada Backcountry