For as long as I can remember, the idea of scuba diving has terrified me. So pervasive is my dread of depending on a tank, hose, and regulator for my survival—don’t even get me started on the bends—that I have passed up several chances at free professional dive certification and several more invitations to travel to exotic locales to engage in the activity.

Luckily for me, scuba diving doesn’t reckon on the list of activities a Nevada-based travel writer might find himself engaging in…right? Wrong. During a media-familiarization trip to the eastern Nevada border town of West Wendover last summer, I met my fear of scuba diving in the unlikeliest of locations. 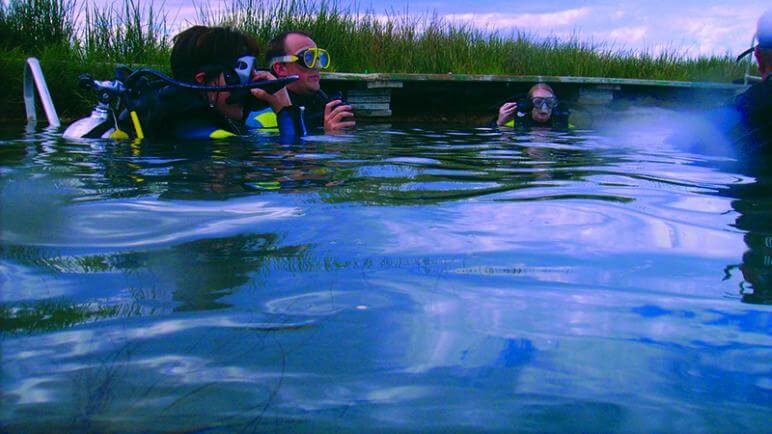 Set amid wetlands on the southwestern edge of the hostilely arid Bonneville Salt Flats, about 20 miles south of West Wendover and a couple hundred feet over the Utah border, Blue Lake is an improbable dive site. But the lake’s geothermal-heated water and relatively easy access from Salt Lake City make it a landlocked scuba-diving mecca.

The 60-foot-deep lake is fed by several warm springs, resulting in balmy underwater temperatures of up to 85 degrees and surface temperatures that rarely dip much below 70. What’s more, the high volume of fresh water provided by the springs results in visibility of up to 40 feet in late fall when the lake’s summer algae bloom has died off. Another good reason to visit in the fall is that warm summertime temperatures in the wetlands bring nasty swarms of mosquitos and horseflies.

A quarter-mile boardwalk leads from Blue Lake’s parking area (an island of BLM land in the middle of an Air Force bombing range) through the marsh to the water’s edge. There, an aluminum platform and dock provides divers and occasional fishermen—the lake is home to bass, bluegill, and tilapia—easy access.

DIVING WITH THE DIVE SHOP

Scuba instructors John Boynton and Robert Stell from The Dive Shop in the Salt Lake City suburb of Bountiful, Utah combine for more than 50 years of underwater experience and have aided countless first timers in getting their fins wet at Blue Lake. Their nonchalant, cheery attitudes put me at ease while their straightforward, no-nonsense instructions make it clear that safety is their top priority.

After sufficiently acquainting myself with the regulator and buoyancy compensator, it’s time to descend underwater. Since my dive is taking place in early September, near the height of the algae bloom, visibility hovers below 10 feet, lending an eerie, surreal feeling of being suspended in an indefinite blue-green abyss. 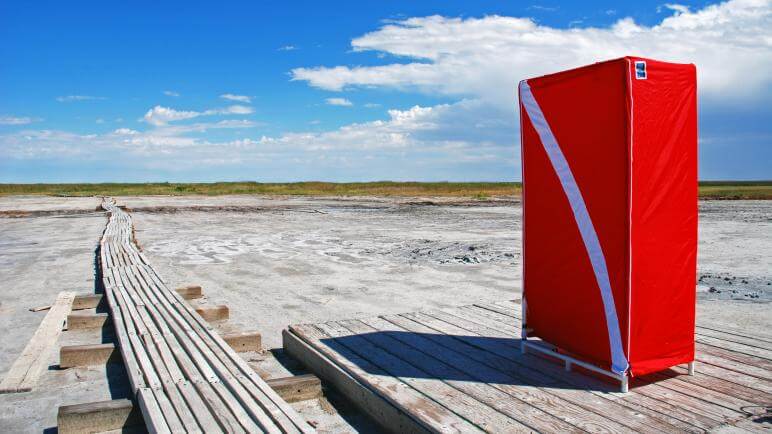 Boynton and Stell are nearby should anything go wrong, and before a general feeling of helplessness in the submerged alien world has the chance to overtake me, I remember their advice to focus on maintaining a steady breathing pattern to avoid panic.

Being unable to communicate with words underwater, scuba divers employ signals. There are quite a few, but some basics include: thumbs up means the dive is over, thumbs down indicates someone is diving deeper, a closed fist means to stop, and the thumb and forefinger joined to form a
loop with the three remaining fingers splayed out both mean “Are you okay?” and “Yes,
I am okay.” 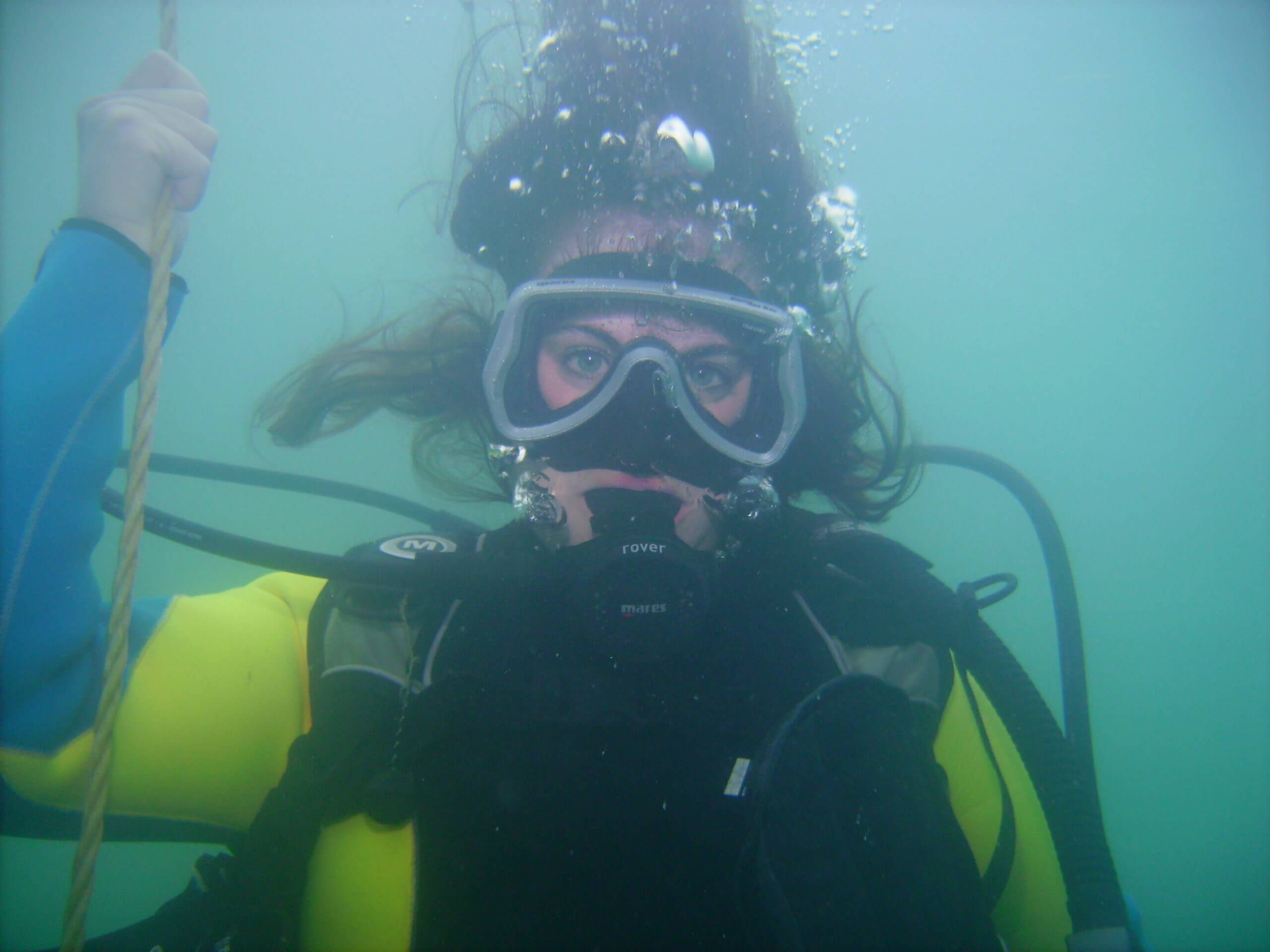 Both instructors frequently make sure the other divers and I are doing well as we follow a yellow nylon rope to a submerged platform. The platform and two more like it are used for dive training, and to help first timers such as myself to familiarize themselves with the delayed and lethargic nature of moving underwater. While I am perfectly content to drift between the platforms for the duration of my underwater adventure, the lake holds submerged treasures for more experienced divers, including the bubbling sources of its warm spring water, several purposefully placed sculptures, and some sunken boats.

Despite my initial fear, I am actually reluctant to ascend when the instructors give the “thumbs up,” meaning our dive has concluded. Bobbing up and down in the calm waters of Blue Lake, I have a newfound appreciation for the allure of scuba diving. That’s not to say I’m not looking forward to the buffet that awaits me back in West Wendover.

Though much colder than eastern Nevada’s Blue Lake and presenting more technical challenges due to its high altitude, Lake Tahoe is popular among warm-blooded scuba divers. While experienced divers can venture out on their own and choose from several popular dive sites such as Cave Rock and Sand Harbor, the rest of us are wise to explore the lake’s legendarily clear waters with experts such as those at Reno’s Sierra Diving Center. The full-service dive shop offers guided tours as well as training and equipment rentals. #NVAdventure