You need to use your imagination when you visit St. Thomas, the now vanished farming and railroad town built at the confluence of the Muddy and Virgin Rivers in southern Nevada. Mormon settlers founded St. Thomas in 1865, but they returned to Utah in the early 1870s when a state boundary survey placed the town in Nevada. After 1880, several Utah farmers came back to St. Thomas and the town slowly regrew. In the late 1930s, however, Hoover Dam backed up the Colorado and its tributaries to form Lake Mead. The town was inundated, eventually lying under 50 to 70 feet of water, and residents relocated to other towns. What is left is a puzzle of concrete foundations that only can be seen when the lake recedes due to drought and increasing demand on Colorado River water, conditions that exist today.

You can hike from the parking area off Old St. Thomas Road to the site. You thread your way through sharp tamarisk branches, walking on salt-encrusted silt (wear long pants and stout shoes). At the town site, tree stumps stand where streets once led through town, and whitened concrete foundations show where people lived and worked. When the town was abandoned, the cemetery was moved to Overton. You can visit the cemetery and read names from mining and pioneer times. Descendants of Daniel Bonelli, who operated a ferry service across the Colorado River after his Mormon neighbors left for Utah, still live in the area.

Ancient peoples known as the Basketmaker and Pueblo cultures occupied this region for more than a thousand years. They grew crops such as maize and beans and lived in pit houses and adobe structures. The largest complex of dwellings, called Pueblo Grande de Nevada or Lost City, was also flooded. In the 1930s, archaeologists and Civilian Conservation Corps crews rescued hundreds of artifacts for display at the Boulder Dam Park Museum in Overton. Later renamed the Lost City Museum, it is operated by the Nevada Division of Museums and History.

Overton is 65 miles from Las Vegas via U.S. 93 and S.R. 169. Follow S.R. 169 south from Overton to Bluff Road, then Old St. Thomas Road to the town site (about 9.6 miles), which is managed by the National Park Service, Lake Mead National Recreation Area. A 2.5-mile loop trail leads from the parking area. Fast facts: On June 11, 1938, Hugh Lord rowed away from his house in St. Thomas, the last citizen to leave before the town was covered by water. Lake Mead National Recreation Area maintains vault toilets at Stewart’s Point and St. Thomas for visitors. The National Park Service reminds visitors that collecting artifacts and using metal detectors is not allowed at the recreation area. The Lost City Museum is open 8:30 a.m. to 4:30 p.m. daily except major holidays. Admission costs $3 adults 18-64; $2 seniors; children under 18, free. 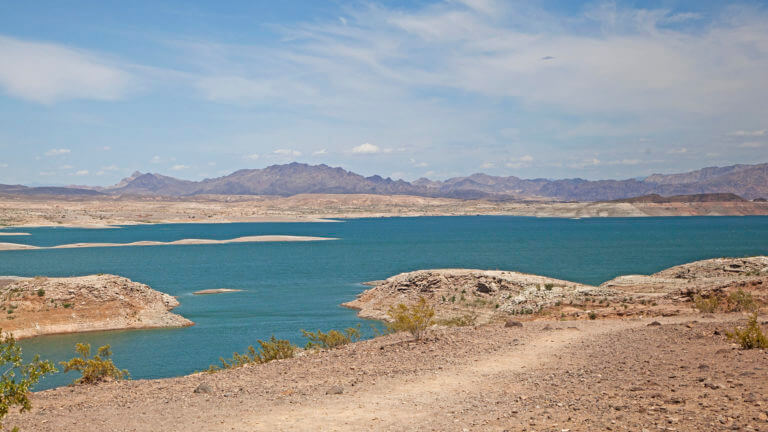