As a state founded by gold miners and cowboys, built up by casino magnates, and flocked to today by renegade artists and other modern freedom-seekers, “ordinary” has just never really been in the cards. And don’t get us wrong. We love our pristine scenery, world-class cuisine, and oh-so-many picture-perfect niceties. But at the same time, whether it’s a haunted clown-themed motel or a “forest” of junk car canvases, there’s another way of looking at things that’s clear to born adventurers hungry for something a little more savory in their future campfire tales: our quirks… are our perks. No matter if you’re deep down the Extraterrestrial Highway rabbit hole or just beginning to scratch the surface of Fremont Street, you’re never too far from some Weird Nevada landmarks that are just satisfyingly so unusual.

“Ok, Google. Show me ghost museums in my area.” In Nevada, that actually kinda works. Take Zak Bagans’ The Haunted Museum in Downtown Las Vegas, 30 rooms jam-packed with some seriously spooky artifacts—like an entire room full of cursed puppets—that are rumored to be the world’s most haunted objects. Of course, Virginia City’s Washoe Club & Haunted Museum couldn’t be a more quintessential qualifier, either. As one of the most haunted places in the West, it’s a mecca to the world’s paranormal elite. Take the tour to hear stories from the Millionaires Club, reported hauntings, and tales of the historic crypt.

Spring for the “R.I.P. Experience” and get chauffeured in a custom hearse to Tom Devlin’s Monster Museum in Boulder City for a personal tour through his massive collection of screen-used props, creature suits, and custom pieces that helped make monster movie history. Does it get any weirder?

Back in the 1950s, Las Vegans used to take a long lunch—first to eat a sandwich, then to watch a bomb explode. Surreal? Yes. Fascinating? Absolutely. With more than 12,000 interactive displays, stories, and videos, the National Atomic Testing Museum educates visitors about Nevada’s explosive Atomic Age history. Swing through Hawthorne—home to America’s largest artillery base—to zero in on the Ordnance Museum’s cluster bombs, historical ammunition, vintage military uniforms and trunks, and some of the first drones in existence.

In the Wild West, where there were cattle, there was bound to be some cattle rustlin’. But few cow thieves were ever clever enough to make off with dozens of head for several months, leaving not even a footprint—that is, a human one—save one man. His secret? Plank shoes fitted with cow hooves, now on display at Elko’s Northeastern Nevada Museum.

How many other places have an official state element? In Nevada it’s neon, and a trip to the Strip or Downtown Las Vegas will tell you why. Visit the Neon Museum for an incredible collection of neon signs. The visitor’s center is situated in the historic La Concha Motel lobby that flashes visitors back in time with its mid-century, Atomic Age vibe. Plan to spend at least an hour taking the tour and exploring the Boneyard.

If you’re the kind of person who understands that no trip is complete without someone saying “Well, THAT was a little odd!” a couple times a day, then you’re in luck.

Showgirls, showgirls, showgirls! Breaking down the importance of this Nevada icon, one sequin at a time, this Nevada State Museum—Las Vegas exhibit hashes out the beauty, artistry, and of course over-the-top, in-your-face extravagance behind Vegas’ longest running Parisian cabaret-style shows. 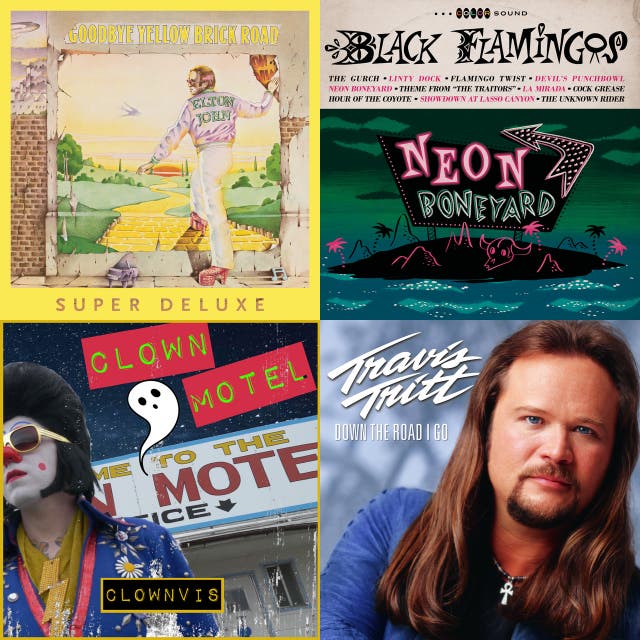 If you’re the kind of traveler who believes no trip is complete without someone saying, “Well, THAT was a little weird…" you’re our people. Crank up this appropriately oddball soundtrack, inspired by our site’s lineup of offbeat attractions, as you plan which #WeirdNevada wonders to visit in person.

“DIED EATING LIBRARY PASTE” is but one of the gut-busting epitaphs that reveal the untimely demises of this cemetery’s permanent residents at the Goldfield Historic Cemetery. Now a “living ghost town,” it was once one of Nevada’s largest boomtowns, the growth of which forced this former downtown cemetery to be relocated (residents and all) by a crew called the “Official Ghouls” of the night.

That cluster of 35-foot-tall DayGlo bouldered totems you’ve eyed down on the horizon, rising conspicuously from the surrounding desert landscape, is Seven Magic Mountains, baby. This polychromatic, cult-classic photo op is an exclusive art installation beckoning ‘Grammers off I-15 as they head for the Strip.

Road trippin’ the Cowboy Corridor? Head for the delightfully offbeat roadside attraction called Thunder Mountain—a colorful, imaginative folk-art array of sculptures and buildings constructed almost entirely from items found along the highway decades ago. Watch for the Imlay exit, then follow your camera lens around this special addition to the Nevada State Register of Historic Places.

Longstreet Inn is one of those places that can’t help but feel like you’re inside some weird dream. And then, in true dreamlike fashion, out in front, screaming to be noticed is BIG BOVINE: an enormous, two-story cow statue offering a warm, Weird Nevada hello for all those travelers headed for the good stuff on our side of the California/Nevada border.

While you’re here, be sure to inquire about the actual 3,000-lb. cow who inspired this very weird, very appropriate installation.

Just outside Beatty, perched within view of the ruins of historic Rhyolite, the Goldwell Open Air Museum puts the “ghost” in “ghost town.” Begun in the 1980s by Belgian artist Albert Szukalski, its signature photogenic plaster ghosts form a spectral tableau of Da Vinci’s “The Last Supper,” alongside several other installations, which continue to enchant thousands of international visitors to nearby Death Valley.

Got spray paint? Bring it to Goldfield’s International Car Forest of the Last Church. In this unconventional sculpture garden, 40 automobiles—cars, trucks, and vans—stand on end, straddle crevices, or balance delicately on top of one another, inviting new paint jobs from visiting “churchgoers.”

Fear Factor: Nevada Edition. Exactly what it sounds like, The Clown Motel in Tonopah boasts what’s got to be the largest private collection of clown figurines and memorabilia under the sun. If the creepy clown theme—which stretches beyond the lobby and into each room—isn’t enough to spook you, the added bonus of some resident ghosts slinking over nightly from the cemetery next door might just be the ticket. Even if you don’t stay the night, drop by the lobby, get drowned in clowns, and snap up some truly unique souvenirs from the mini gift shop in the corner. Oh, and before we forget: free clown noses, anyone?

Pahrump is home to a charming little family-run coffin shop. Nope—not a typo. Read that again. Situated along the Death Valley Rally, a lively husband-and-wife team run Coffinwood, a charismatic coffin-themed business. Initially driven into the old-school, six-point coffin making business to fight the predatory funeral industry, this dynamic duo now offers tours of their macabre, made-to-order, coffin-shaped everything business, including their workshop, hearse collection, and “Church of the Coffin” wedding chapel.

After savoring samples of Carolina Reaper, Cowboy, and other jerky specialty flavors at Alamo’s E.T. Fresh Jerky, peruse kitschy curios, pose with life-size local out-of-towners in funky murals, and be sure to “drop your toxic waste in the cleanest restrooms in Area 51.” After you’ve snagged a selfie with the alien murals, head for the Alien Research Center—you won’t miss it. Gleaming in the desert sun like an actual spaceship, this silver Quonset hut and its two-story silver alien security guard serve up the latest alien apparel, hats, and far more.

There’s an entire independent micronation in Nevada that we bet you’ve never even heard of. The Republic of Molossia, not far from Dayton, is loaded with crazy quirks, like an official customs station, a national instrument, and even its own postal service. Bring your passport to be stamped, but be sure to leave your incandescent lightbulbs, catfish, and onions at home—those micro-nationally contraband items will be strictly confiscated at customs.

Let’s Get Weird: Weird Nevada Wonders Around the Silver State

Q&A with the Ringleader of the World Famous Clown Motel

Weird Nevada: Oddball Attractions In and Around Las Vegas

Meet the Lady in Red: Nevada’s Most Famous Ghost

17 Ways To Earn Your Stripes On The ET Highway

Fear not, fellow travelers! This is just the beginning. If you’re still hankering for more spooky, weird, and just plain out-there experiences, there’s plenty more Weird Nevada where that came from.

As freedom-seekers, “ordinary” was just never really in the cards. We certainly adore our state’s many picture-perfect niceties; but, at the same time, whether it’s a clown-themed motel or a “forest” of junk car canvases, there’s another way of looking at things that is clear to us: our quirks are our perks. In Nevada, you’re never too far from something satisfyingly unusual.

Wading into some Weird Nevada and digging it? You’re in good company. Tag #TravelNevada so we can creep your feed. If we love your photo, you may find it featured here. 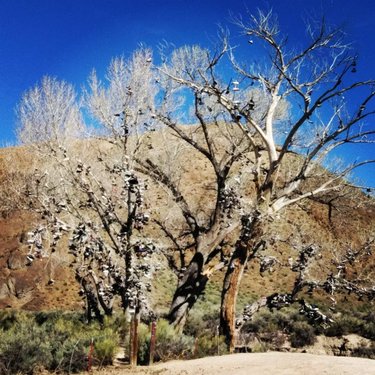 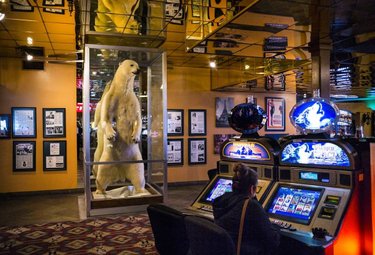 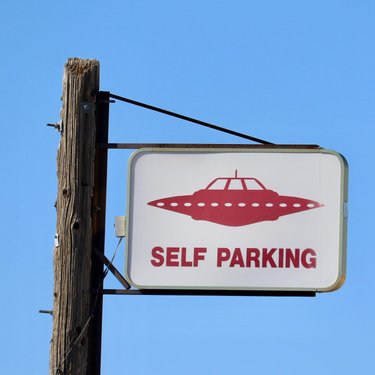 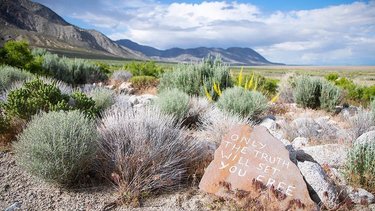 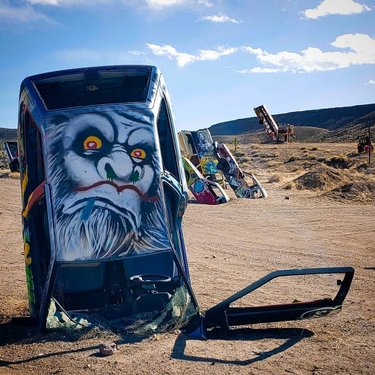 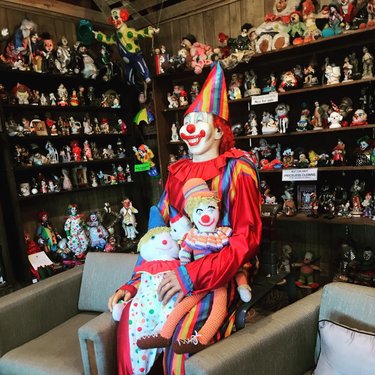 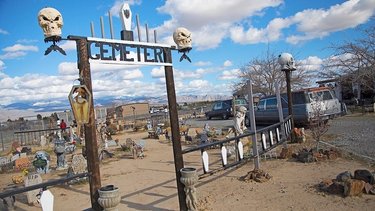 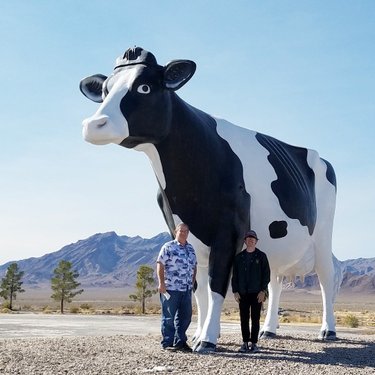 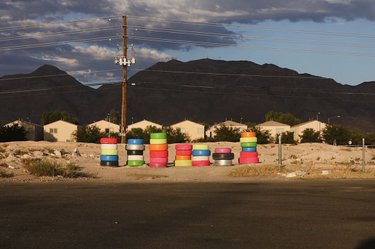 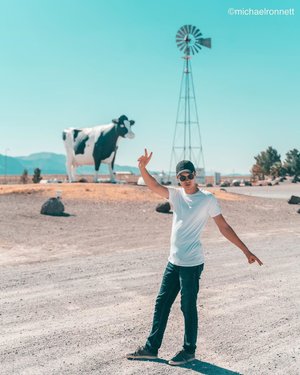