Local news broadcasts have been buzzing all week with talk of the first above ground atomic tests at the Nevada Test Site, 63 miles north of town. Across the valley people are climbing onto their roofs to claim their front row seats for the blast. Joe and Stella Sobchek are no exception.

Taking a break from the renovations that changed Virginia’s Cafe into a liquor store/bar that has yet to be re-named, the couple climb onto the roof. The buzz and chatter that filled the frontier town comes to a stop as the countdown begins…

The ground trembles and with a flash, a second sun illuminates the horizon. A mushroom cloud full of desert dust climbs into the sky, towering over the sagebrush and mountain ranges of southern Nevada.

One year and eleven detonations later, Joe & Stella’s new venture, Atomic Liquors, opened its doors for business. Their major hook? Inviting people to sit on their rooftop to view the atomic bomb detonations.

Lance Johns continues the legacy that the Sobchecks left behind after they passed in 2010. Aside from some irresistible history, Atomic Liquors’ claim to fame is holding the very first liquor license in Nevada, outside of a casino that is. Whether you’re enjoying the rotating draft beer selection, or sipping on one of their seasonal cocktails, you’ll find no shortage of stories from locals who’ve seen the city change over the years (they are more than happy to tell you how things ‘used to be’). The gaming has gone, but in its place comes a healthy dose of conversation and neighborhood bar personalities. With more than 70 years of memory sealed beneath layers of paint and tar, too numerous to be counted, you can almost hear the laughter of legends long gone. 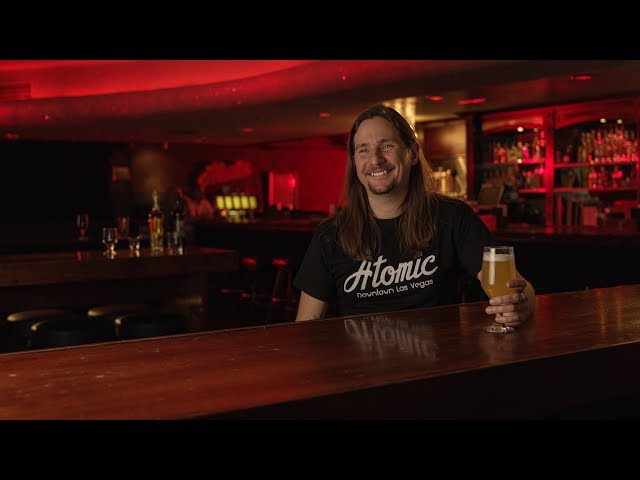 The red lighting softly filling the room at night, breaks only for neon signs and a juke box that’s nearly as old as the bar itself.

A floor safe, discovered during the most recent renovations, has been transformed into a display, illuminating artifacts from the bar’s expansive history.

In a setting like this, it becomes easy to picture Barbara Streisand taking her place at the bar (the seat with an embroidered star), and chatting with Stella about the daily trials and triumphs of being hardworking women in the 60’s. Radiation warning signs and Geiger counters on loan from the Atomic Testing Museum adorn shelves and walls honoring the history of the city. Old Crow Bourbon, a Hunter S. Thompson favorite, is always on hand to bring you back to a time when his unusual swagger was commonplace here. It’s a past and present full of color and character that is coming full circle back to its roots as Virginia’s Cafe.

Stepping out onto the patio, construction is once again transforming the little corner of 10th and Fremont. The building that once held the 10th street garage also became the Atomic Kitchen—connected to Atomic Liquors by patio. What started out as a dream for the Sobcheks continues to draw people from all walks of life through the doors of Atomic Liquors.

Jeff Bennington Grindley is a native Las Vegan who loves the city and state he lives in. He is a writer and barkeep with interests widespread, who has a wife that keeps him moving towards his dreams.

TN: One thing that makes a visit to Atomic Liquors an experience unlike any other?
Jeff: We really pride ourselves in outstanding service, but the thing that sets AL apart from any other place is the history and the people that walk through the doors. As a native Las Vegan, it’s cool to get insight on the town’s heart; you hear it from old school residents who have been here for years, and you get the scoop on what’s happening immediately from everyone immersed in it now. It’s a hub that connects the spokes of what’s been and what’s to come.

The Metropolis That Wasn't

Meet the Lady in Red: Nevada's Most Famous Ghost

Hitting Hoover? Boulder Move: Grab Onto Concrete History in the Town That Built It