Nevada earned its reputation as the Silver State, thanks to a cache of silver and gold discoveries that sprang to life in the mid-1860s. Prospectors from all over the country—and globe—flocked here, to what were some of the largest and purest silver discoveries in the world. After the mines’ profits “dried up,” residents moved onto the next big boomtown—in some cases, over 100 years ago—forever abandoning what would become hundreds of Nevada ghost towns you can still explore today.

Where the Ghosts Live

When it comes to ghost towns, you’re in luck—Nevada’s got more bygone boomtowns than actual populated cities and towns. We’ve got Nevada’s dry climate to thank for that one, which helped preserve these historic buildings all these years. Out in the Silver State’s mighty seas of sagebrush, you’re more than likely to dig deep in the pages of the past and get to know these legendary places that built up the state.

In love with the Silver State as much as we are? Learn what you can do to help us keep the places we cherish special—and open—for us and future generations.

Sold yet? It’s hard not to be. And now you’re probably thinking, so what are some ghost towns near me? When it comes to Nevada ghost towns, the good news is this: from Jarbidge and Goodsprings to Hamilton and Berlin, they’re all around you. Some of the Silver State’s best 19th-century ghost towns are right outside Las Vegas, and even Death Valley, in places no farther than 40 miles north of Lake Mead—even one which used to be flooded beneath its surface.

Less than an hour away from Las Vegas, the Techatticup Mine in Eldorado Canyon is a photographer’s paradise, with thousands of movie and photoshoots to its name, and leftover props as eye candy. In its heyday, this mine pumped out millions of dollars in gold, silver, and copper, making it the richest and most famous in southern Nevada. Today, poke around with your camera or go underground with Eldorado Canyon Mine Tours.

To keep exploring, head to Goodsprings Ghost Town, about 20 minutes south of Vegas. Goodsprings is home to the oldest bar in southern Nevada. The town peaked in 1916, supplying zinc and lead for World War I. Stop in the Pioneer Saloon, whose bar counter originally stood in Rhyolite before the town busted. Look for bullet holes from a poker game gone wrong in the original Sears and Roebuck stamped tin walls and cigar burns in the bar countertop, left by a sleepy Clark Gable in the 1940s.

Just discovered the coolest old ghost town relic? Cool! Snap a pic and leave that bad boy right where you found it.

More? Well, nestled in a volcanic rock canyon at the edge of Death Valley, Rhyolite Ghost Town saw its population erupt to several thousand after Shorty Harris’s famous 1904 gold discovery. By 1920, dwindling mine production caused the town to collapse. The looming remains of the bank, general store, and train depot have starred in many films, and dazzle millions of visitors, alongside attractions like the Tom Kelly Bottle House and, later, the avant garde Goldwell Open Air Museum. Today, this easily accessible gem is one of the most photographed ghost towns in Nevada.

What about ghost towns near Reno? We’ve gotcha covered up north too, with some Nevada ghost towns that earned the “Silver State” its nickname and put it on the map. Though not in the crumbling-and-abandoned sense, one of the most prime examples of Nevada’s former boomtown glory days is in Virginia City—home of the largest silver strike in the world. Head here to sip suds in frozen-in-time saloons with names like Bucket of Blood and Silver Queen, stroll original wooden boardwalk-lined streets, and hear tales from local characters who still sport period costumes. Be sure to ask around in Virginia City’s haunted hotels and saloons to hear some of the best Nevada ghost stories, too.

Be sure to ask around in Virginia City’s haunted hotels and saloons to hear some of the best Nevada ghost stories, too.

Beyond Virginia City, head for Fort Churchill State Historic Park to imagine what life must’ve been like 150 years ago when this military fort was created to guard early pioneers. Today, the fort’s ghost town ruins stand in a fascinating state of arrested decay. Stargazing here is unreal, and there’s no bad place to take a photo.

Also managed by Nevada State Parks, visitors are treated to a three-part ghost town paradise at Berlin-Ichthyosaur State Park, a Nevada ghost town boasting history that goes farther back than any other. While Berlin’s 19th-century settlers came to unearth ore, they also ended up bumping their shovels into the world’s largest concentration of ancient Ichthyosaur fossils. Plan to explore a handful of original historic homes and businesses, take the Diana Mine Tour, and swing through the Fossil House to get face-to-face with Nevada’s official state fossil—maybe all while sippin’ on a frosty, Ichthyosaur-themed, Reno-brewed Great Basin “Icky” IPA.

Other ghost towns near Reno, Nevada include Seven Troughs and Gold Point Ghost Town. Both are a few hours drive beyond the Biggest Little City, but promise impressively intact structures, like historic homes, an old general store, bank buildings, stamp mill sites, and even a modern-day Sagebrush Saloon or two.

Nevada Ghost Towns In Between

Where else do the ghosts live? Tucked in Nevada’s basins and foothills, you’re bound to find a ghost town or two. Not far from Wells is Metropolis Ghost Town—which met its untimely demise, all thanks to crop-eating jackrabbits, a typhoid endemic, an invasion of Mormon crickets, fire, and drought. No, seriously. Leftovers of the ill-fated attempt at civilization of the Metropolis-that-wasn’t include a schoolhouse with a distinct, still-standing brick archway and the foundation of an old hotel. Great photo ops abound… killer jackrabbits, maybe.

Hidden in the hills between Lovelock and Winnemucca, Unionville Ghost Town is a slice of backcountry bliss that’s practically begging for a detour off the interstate. As if being in a living ghost town (with a population of less than two dozen) isn’t cool enough, the place also boasts the cabin ruins of a pretty famous former resident, Samuel Clemens (although you might be more familiar with his Nevada-born pen name, Mark Twain).

About 50 miles northeast of Tonopah is Belmont Ghost Town—one of the Nevada ghost town greats. Unlike most other ghost towns, Belmont’s boom lasted an impressive 20 years after springing to life with an 1865 silver discovery. Explore the fascinating 150-year old Belmont Courthouse—a state historic site—perfectly masoned miners’ cabins and mill sites, and the Monitor-Belmont Mill chimney—originally built to mill bricks, then used for target practice by WWII Air Force pilots. Stay the night 20 miles west in Manhattan, where you’ll find Belmont’s original church—stolen in the middle of the night and moved to Manhattan after Belmont busted.

Stay the night at the Old Pioneer Garden Country Inn and count on a memorable history lesson from the folks who tend the ghost town’s original gardens and host guests in the blacksmith shop and other original buildings.

The Metropolis That Wasn’t

15 Sagebrush Saloons Worth Drinking In… And What To Order

There’s an adventure itch that only a ghost town excursion can scratch. Maybe it’s because you’re standing in the shadows of some whopping boom-and-bust history. And that these massively impressive relics are waging (and kinda winning) a fight against time. Memories made in these places become stories you’ll tell for a lifetime. One thing’s for sure: after your first trip to a set of fabled ruins, you’ll be hooked.

Gettin’ down in Nevada’s ghost towns? Use #NVGhostTown for your favorite haunts—maybe even a few ghostly encounters or two, too. If we love your photo, you may find it featured here! 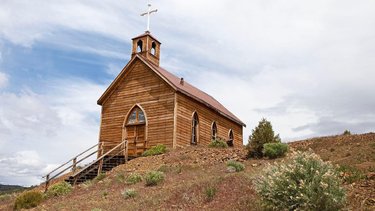 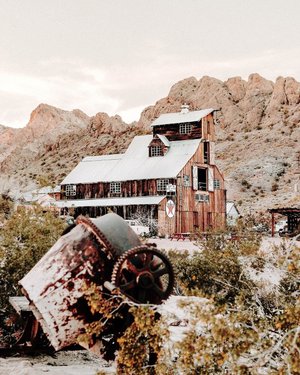 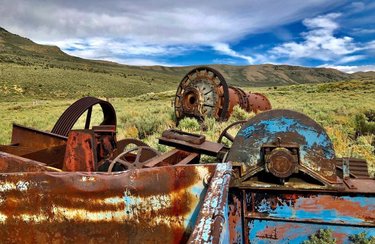 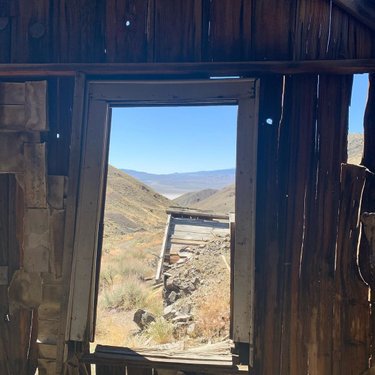 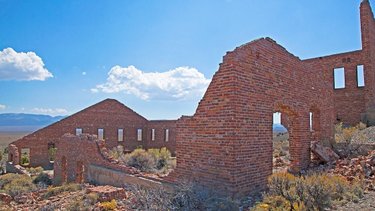 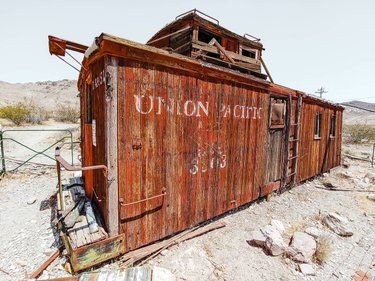 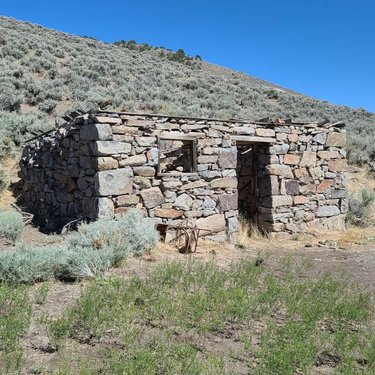 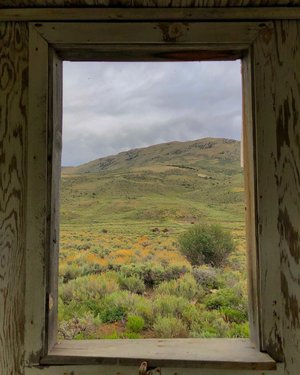 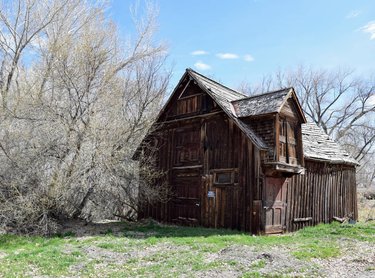 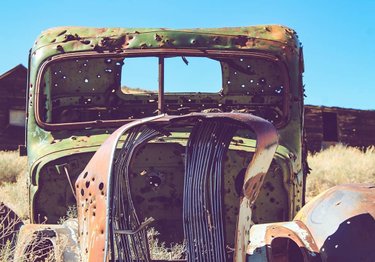