A Haunting On The Comstock

When I heard we would be spending a night in the miner’s cabin at the Gold Hill Hotel—one of the most popular destinations for paranormal researchers in the state—and taking a walking ghost tour in Virginia City both in the same night, I was naturally (or supernaturally) elated.

The sky was a ghoulish gray during the drive to the Gold Hill Hotel in mid-July, and I laughed to myself at the notion that many good horror movies start exactly like this: unsuspecting characters travel to destination, bad weather prevents them from leaving, destination ends up being haunted…you know the rest. Constructed in 1861, the historic hotel was the perfect location for a home base during our ghostly excursion. 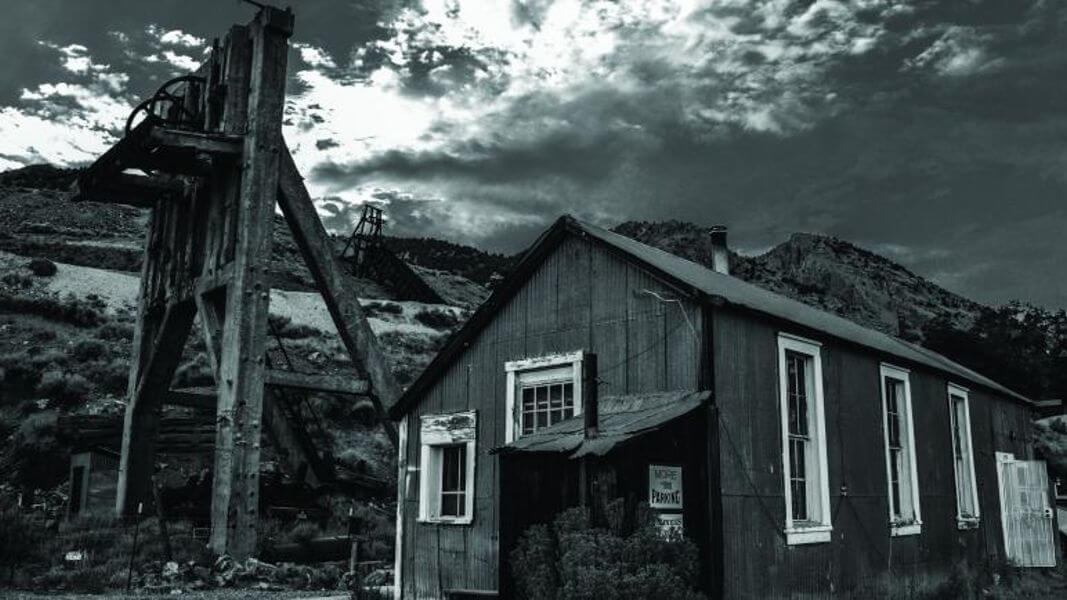 Editor Megg Mueller and I arrived at the hotel mid-afternoon. We were greeted by Gold Hill Hotel Marketing Manager and Nevada expert Clay Mitchell, who gave us a tour and history before an early din- ner at the Crown Point Restaurant. The restaurant serves a scrumptious assortment of pizzas, burgers, gourmet entrees, and specialty dishes, fueling us up for the long night ahead.

After dinner, Clay showed us our “ghost hunter kit”—available for rent to guests of the hotel for $25. The kit contains a recorder for capturing electronic voice phenomenon (EVP), an EMF meter for measuring electromagnetic fields, a compass, a deck of cards, and an assortment of interesting items and books aimed at helping us capture spiritual presence.

Our home for the night was the miner’s cabin, located at the base of the historic Yellowjacket Mine head frame. During the Comstock era, the cabin housed miners entering and leaving the mine, and served as a checkpoint to combat high grad- ing—the theft of gold- and silver-bearing material by miners. A mine fire in 1869—one of the worst mining tragedies in Nevada at the time—took the lives of nearly 35 miners, some of whose bodies were never retrieved. Though not the only supposedly haunted room at the hotel, we decided it was the perfect room considering the grisly history.

The cabin is an apartment-style lodge that includes two queen beds, a full kitchen, eating area, and two bathrooms, and sleeps up to six guests. Though comfortable, the room gives off an eerie presence the moment we step in and or- ganize our belongings. After exploring the cabin for a bit, we snap a few photos and head up to our next destination—Virginia City—for the Bats in the Belfry walking ghost tour.

A Nightmare On C Street

We arrived to an amalgam of opaque windows and peculiar silhouettes as twilight greeted us in Virginia City. Our destination was the Silver Queen Hotel, where we met up with Debbie Bender, our tour guide for Bats in the Belfry.

After a quick briefing in the wedding chapel at the Silver Queen, we headed upstairs in our hunt to make contact with the spirit world. Armed with several EMF meters, we head to the most haunted room in the hotel, looking for any spikes in activity. “Once in a while we get lucky and the spirits want to say hi to us,” Debbie says as we keep an eager eye out for movement on the meter. “We’re going to look for the needle to start moving. Once it does, we’re going to look for anything manmade around us that may be causing it to move. After we’ve eliminated that possibility, we’re going to assume there is something of a paranormal nature and make contact with it.” 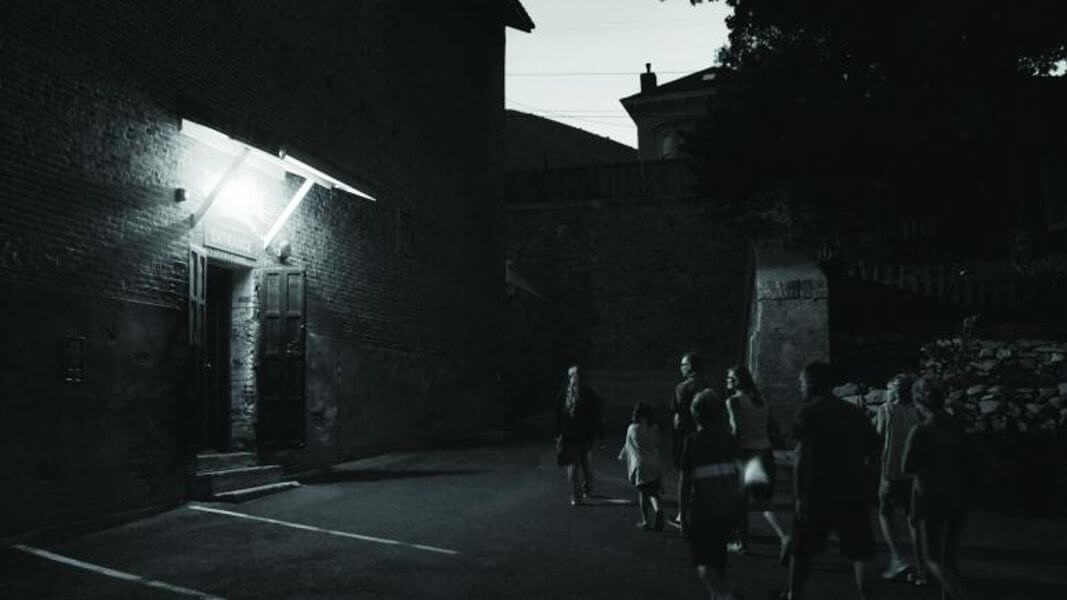 We made our way to Room 11, which is said to be fre- quented by the spirit of a prostitute named Rosie who died in the hotel during its early days. As Debbie attempted to make contact with Rosie, the meters began to bounce and everyone in the room began to squirm with excited nervousness.

The tour continued on through the streets of Virginia City, stopping at various historic buildings. Debbie shared an abundance of historical and haunted tidbits, taking note of any spikes on the EMF meter or any “orbs” that may have been captured in the photos people were taking. The tour wrapped up at the Washoe Club, with a visit to the crypt in the back of the bar and a spiral staircase that was featured on Ripley’s Believe it or Not! for being the longest of its kind with- out a supporting pole. After we said goodbye to Debbie and the rest of the Bats in the Belfry crew, we headed back to the Miner’s Cabin in Gold Hill. #NVGhostTown

There are many more ghost tours and haunted experiences across the Silver State. Here are just a few spooky experiences that give visi- tors a look into the world of haunted Nevada:

Carson City’s history is explored and theatrically recreated in the 20th annual Carson City Ghost Walk on Oct. 18. The Ghost Walk is a delightfully spooky and enjoyable way to experience Carson City’s Victorian Era and diverse past. Meet lingering spirits with many haunted and paranormal stories to take in. Some of the spirits even lead the guided walking tours of the downtown district’s historic homes. Tours visit inside at least five different houses, last approxi- mately 90 minutes, and depart every half hour beginning at 10 a.m. from 3rd and Curry Streets. Tickets cost $15 in advance and $20 the day of the event. carsoncityghostwalk.com, 775-348-6279.

Have you ever wanted to hunt ghosts in a 100-year-old haunted Nevada mining town? Participate in a ghost investigation that will take you to the haunting grounds of Goodsprings, as seen on the popular television show “Ghost Adventures.” Over the years, many ghostly sightings have taken place in and around the deserted remains of Goodsprings, making it the perfect location for a ghost hunt.

Ghost hunting equipment is provided and the adventure includes a pizza party at the world-famous Pioneer Saloon.

This tour also includes free transportation to and from Good- springs from Las Vegas, and lasts approximately four hours. goodspringsghosthunt.com, 702-677-6499

Have you ever wanted to hunt ghosts in a 100-year-old haunted Nevada mining town? Participate in a ghost investigation that will take you to the haunting grounds of Goodsprings, as seen on the popular television show “Ghost Adventures.” Over the years, many ghostly sightings have taken place in and around the deserted remains of Goodsprings, making it the perfect location for a ghost hunt.

Ghost hunting equipment is provided and the adventure includes a pizza party at the world-famous Pioneer Saloon.

This tour also includes free transportation to and from Good- springs from Las Vegas, and lasts approximately four hours. goodspringsghosthunt.com, 702-677-6499

The Biggest Little City Ghost Walk in Reno runs through late October. Renoites Janice and Bill Oberding are the tour guides on this glimpse into Reno’s haunted past and present. Attendees can expect to hear stories of notorious men and women who left their marks on many of the downtown area’s buildings and locations.

Tours are scheduled Friday and Saturday evenings, and must be booked in advance. hauntednevada.com, 775-846-2331

Turquoise in Them Thar Hills