Get to Know Nevada’s Creature Scene

The Silver State features plenty of creatures. From the first designated endangered species to wild horses, pronghorn antelope, and more, some of America’s favorite wild creatures thrive in Nevada’s millions of acres of wildlife refuges. Out here, wildlife can truly be wild, often on private and public land that’s remained untouched for thousands of years—and in some cases nowhere else on Earth. Keep an eye out for Nevada wildlife you know—after all, more than half the nation’s wild horses roam free here—but also many species you might not expect. Bring your camera; from the tough desert tortoise to desert bighorns ranging in their largest habitat to a surface-dwelling desert fish (the world’s rarest) that has defied all odds, chances for wildlife photography and incredible animal encounters abound.

Wildlife Viewing in a Place That’s Still So Wild

The Silver State is home to some of the largest national wildlife refuges in America, providing dozens of specialized habitats to a collection of animals, birds, and reptiles found nowhere else on the planet.

From the highway of raptors and other migratory birds that soar over Nevada each year, to ancient, trophy-size trout saved from extinction, to wildly lush wetlands in the desert, and a sanctuary so special it saved the pronghorn antelope entirely, find your inner beast with this lineup of living things during your time in Nevada.

Desert Tortoise is the Nevada State Reptile, and can be found in southern Nevada’s Mojave Desert landscapes.

Nevada is fortunate to have more than 70 designated wilderness areas. In total, the wilderness areas in Nevada borders make up nearly 5% of the Silver State’s overall lands.

The massive Desert NWR complex is comprised of several smaller refuges in the southern Nevada region: Ash Meadows, Moapa Valley and Pahranagat National Wildlife Refuges. While desert bighorns roam freely within the entire four-part complex, some of the most likely places to spot these curvy horned sheep is within Valley of Fire, and along the outskirts of Lake Mead. While you’re exploring the area, keep an eye out for the Mojave Desert Tortoise—if you spot some little tiny baby fences off the highway, those are for them—and other reptiles, like side-blotched, collared, and long-nosed leopard lizards, horny toads, and more.

If you’re a nerd for birds, do some watching at northern Nevada’s Stillwater National Wildlife Refuge. Located on the outskirts of Fallon, along the Loneliest Road in America, the refuge captures international attention as a paradise for the 280 species of birds that can be found here on any given day, as well as with the hundreds of thousands of shorebirds that migrate through here, earning its ranking of global importance by the Western Hemispheric Shorebird Reserve Network. The wetlands at the Stillwater Complex attract a mind-melting quarter million waterfowl, along with more than 20,000 water birds and shorebirds, making the refuge a bucket list destination for birders around the country.

The Silver State is home not just to the nation’s largest wildlife refuges, but also some of the most diverse and remote. Nestled against the spectacular Ruby Mountains in northeastern Nevada is Ruby Lake National Wildlife Refuge, important for its seclusion and assortment of creatures not normally found in the high desert terrain. Its centerpiece, Ruby Lake, is a massive oasis of marshy wetlands in an otherwise dry valley typical to Nevada’s Great Basin topography.

Sprawling more than 360,000 acres, Ruby Lake’s shallow, spring-fed marshes stretch 16 miles long and three miles across, holding six different species of trout and the largest concentration of nesting canvasbacks in North America. This unusually lush, vibrant habitat lies along the Pacific and Central Flyways as well, attracting trumpeter swans, greater sandhill cranes, and nearly 220 species of other birds, along with other wildlife, like mule deer, pronghorn antelope, and sage grouse.

The fastest land animal in the continent is alive and thriving like never before, thanks to Nevada’s unusual landscapes and unwavering conservation efforts. The seldomly trafficked northwestern Nevada landscape made for the perfect place to save the American Antelope—otherwise known as the Pronghorn Antelope—which dwindled to near extinction in the 1930s. Ever since the Sheldon National Wildlife Refuge was established shortly thereafter, the pronghorn antelope has been racing across the Great Basin with about 3,500 living inside Sheldon and more than 30,000 statewide.

The pronghorn antelope can reach speeds up to 60 miles per hour—only slightly slower than a cheetah. However, their disproportionately large hearts, lungs, and windpipes give them a stellar respiratory and circulatory system, boosting endurance and enabling them to maintain high speeds for long periods of time with their 22-foot strides. Keep an eye out for their white hindquarters as you road trip through the Silver State—the flashiest part of their coloring that so starkly stands out against Nevada’s basin and range.

Wildlife Photography in the Silver State

Simply put, Nevada is a photographer’s paradise, from that very specific range of western light during Nevada’s golden hour to long exposures of our galactic center dancing through our dark skies. It’s no different when you tighten that lens on the Nevada wildlife, surrounding you wherever your Nevada travels take you. Swing that camera strap over your shoulder and hone your nature photography skills and let subjects like wild mustangs, golden eagles, and more, in the wildlife photos you bring home give you a few thousand words to tell your Silver State story.

Some of Nevada’s best wildlife photography experiences can be found in photo blinds across Nevada’s bevy of wildlife refuges—known to draw migratory birds of all types by the thousands. Settle into the photo blinds at the Henderson Birdviewing Preserve and Stillwater National Wildlife Refuge, or head to Carson Valley during the wintertime—which serves as a final stop along the flight paths of bald eagles, golden eagles, and other birds of prey. While you’re at it, get your wings on tickets to the annual Eagles & Agriculture event—one of your best chances to spot owls in Nevada during photography tours of historic barns and other incredible wildlife viewing opportunities.

Watching a wild horse charge through a sea of sagebrush in all their unfenced glory—does it get any more freeing? More than simply icons of Nevada, wild horses symbolize the American West. With more than 60,000 free-roaming wild mustangs in Nevada—more than half of the entire population of wild horses in the U.S.—your chances of spotting a herd during your time here are good, especially in the foothills surrounding Virginia City and Washoe Lake State Park, in particular, so keep that DSLR handy.

And don’t think we forgot our burro babes! A nod to our Silver State history and heritage, undomesticated donkeys—or wild burros, as we like to call ‘em—freely roam here. While wild horses stampede Nevada’s northern reaches, burros are most easily spotted in central and southern Nevada. Capture a classic Spencer Hot Springs sunset, then photograph the resident Hickson Burro Herd that depends on it as a life source—a memory-maker that only happens in the Silver State.

Forget what you learned from the movies—it ain’t all coyotes and rattlers out here. We’ve got our fair share of benevolent Nevada snakes in both high and low desert terrain, but rattlesnakes are far more uncommon to cross paths with than you mighta thought, and coyotes have peacefully thrived among humans here for thousands of years.

Up for something a little more casual? Just about everywhere your northern Nevada travels take you, keep your eyes peeled for mountain bluebirds—the Nevada state bird. Also keep an eye out for tons of chukar and quail in Nevada, along with an unforgettable population of roadrunners in the southern part of the state.

Nevada’s wildlife refuges are often more easily experienced than explained. With wildlife sanctuaries, refuges and animal parks tucked in every corner of the Silver State, there’s no end to the creature scene around here. Pack your camera and binoculars, and see where these creatures live on in Nevada—and often times nowhere else on earth.

The only thing cuter than a burro? A baby burro. And we know you’ll wanna snap a pic. Whether you spotted a herd of bighorn sheep or crossed paths with a desert tortoise, we want to follow along. Tag #NVWildlife and #TravelNevada to be featured here. 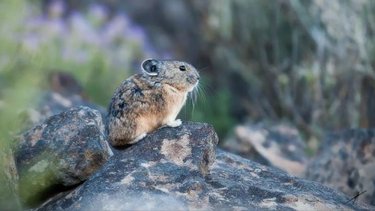 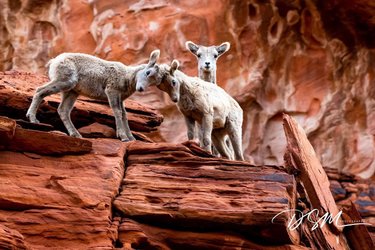 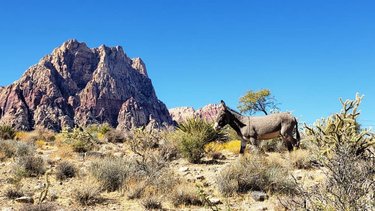 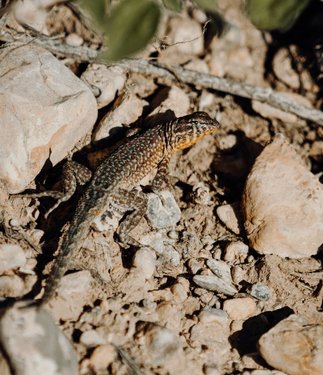 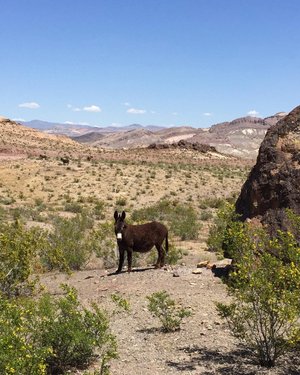 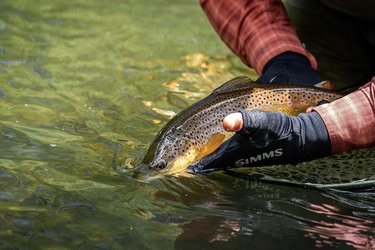 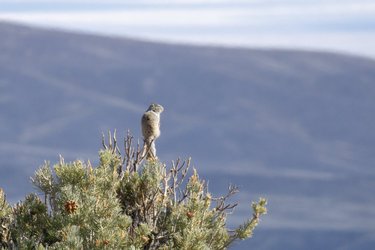 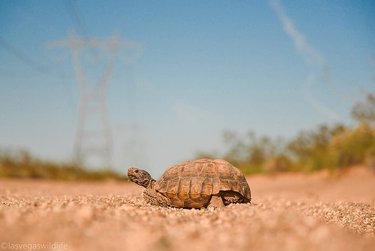 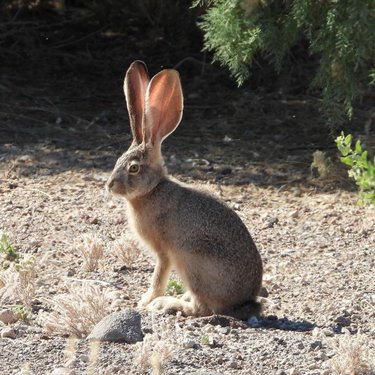 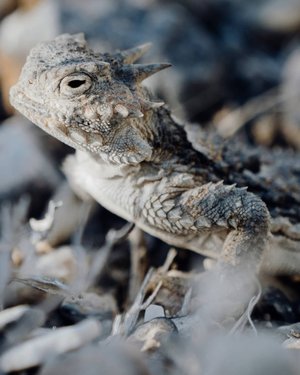