A trip to southern Nevada cant be complete without visiting Hoover Dam, a legitimate modern marvel of the world, or Lake Mead, the nation’s largest man-made reservoir. At the Historic Railroad Trail, both experiences are perfectly wrapped up on a red shiny bow, and an excursion that’s completely worthy of your time.

Today, visitors can access miles of super well-maintained, level trail to a series of gigantic tunnels carved out of the surrounding mountainside. But, it wasn’t always such a beautiful trail. Where the path lies today was formerly miles and miles of railroad track that connected from Las Vegas, to Boulder City, and on to the Hoover Dam. When work began on the mighty Hoover Dam, getting supplies in and out of what was then a secluded section of Nevada proved to be very difficult. Remember that this predated Lake Mead and the establishment of Boulder City. The nearest thriving city was Las Vegas, but only 5,000ish people lived there during the 1930s when construction the Dam began.

In order to expedite delivery of building supplies to the construction site – and massive pieces at that – the method of transportation that made the most logistical sense was hauling it in via train. So, a 30-mile long line of track connected Las Vegas to Boulder City and on to Hoover Dam was soon erected, hugging the southern Nevada mountainsides very tightly. And, in order to execute this relatively long stretch of track, drilling tunnels was necessary. But, as previously mentioned, this wasn’t ordinary freight moving in and out… but gargantuan pieces needed for the Hoover Dam. In order to account for clearance of these large items, each tunnel that burrowed through the mountainside was built the exact same, totaling in 300 feet in length and 25 feet in diameter.

The Hoover Dam was and continues to be a modern marvel of the world, and happened to finish construction ahead of schedule. This railroad was in full swing from the beginning of the Hoover Dam’s construction in 1931, running 24 hours a day. This continued until the completion of the Hoover Dam in 1935, and abandoned shortly thereafter, once it was no longer serving a direct purpose. The U.S. Government Construction Railroad section used this section of track every once in a while until 1961, but eventually scrapped the rail and completely dismantled the line by 1962.

Later, during the 1980s, it became understood that the area was of significant historical importance. A trail was built where the track formerly lay, a historical walking tour was introduced, and the area was added to the National Register of Historic Places by 1984. As it stands, this is the only remaining portion of the Hoover Dam Railroad system that hasn’t been wrecked or lies underwater. Pretty cool, right? Total, there were five original tunnels that you can still check out today.

When visiting the area today, make notice of the signs peppered throughout the journey – they’re loaded with tons of interesting facts about Lake Mead, the Hoover Dam, and wildlife you may see when traversing the trail. It’s not uncommon to see desert bighorn sheep, owls, lizards, and rattlesnakes. Be sure to grab your camera, too… it’s hard to take a bad photo of the tunnels, or unmatched vantage points.

The Historic Railroad Trail can be accessed near the Lake Mead Alan Bible Visitor Center, or via the Hoover Dam parking garage. Though part of the 30+ mile trail that rings Lake Mead, this specific Historic Railroad Tunnel Trail has been designated as a National Historic Trail, as its history, paired with its unmatched views of Lake Mead qualifies as one of Nevada’s most unique trail experiences. Total distance from the Hoover Dam parking garage: 3.7 miles. The most enjoyable time to hike the trail is spring and fall, but anytime you can catch a sunset here is certainly time well spent. 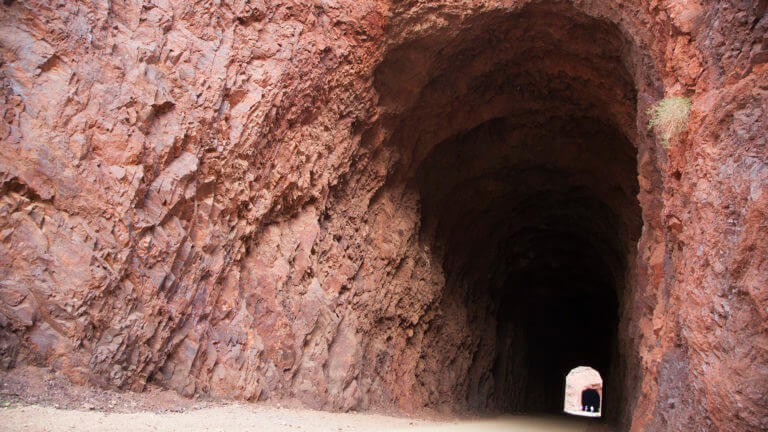 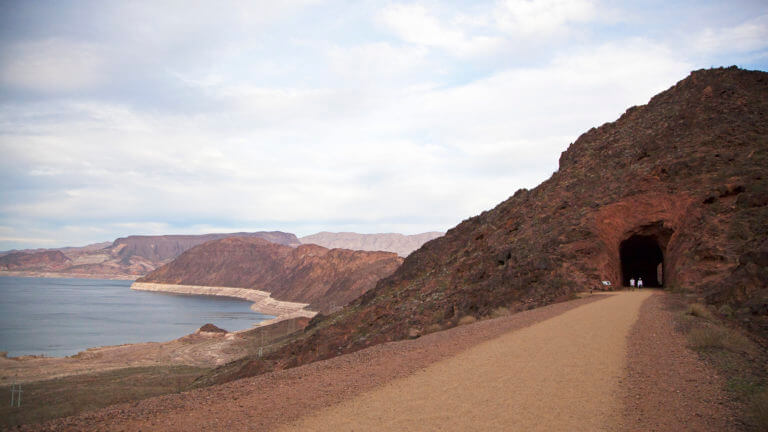 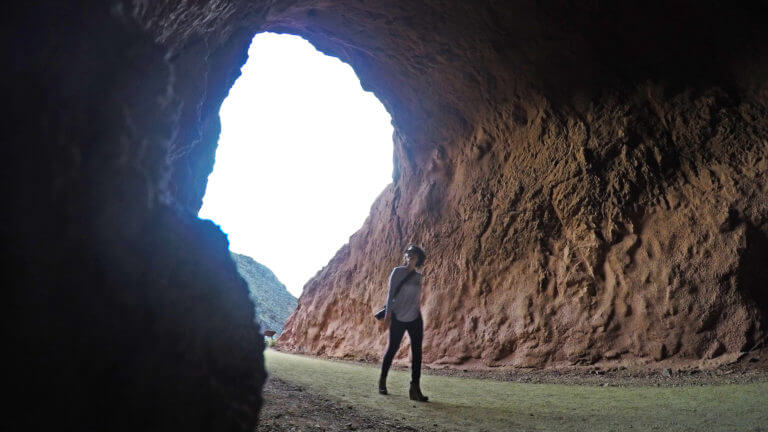 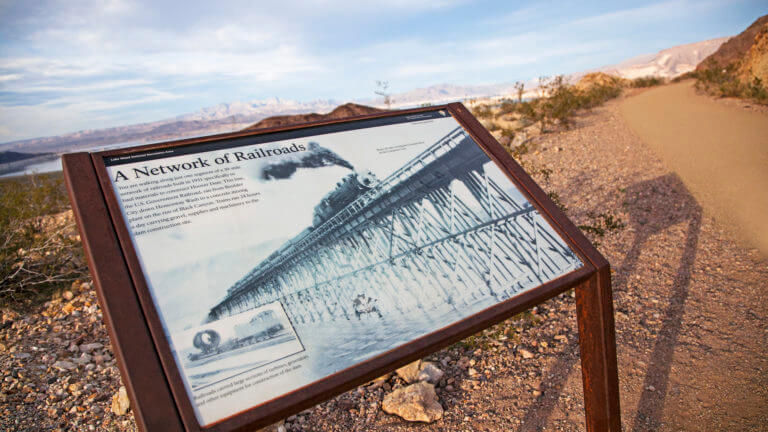 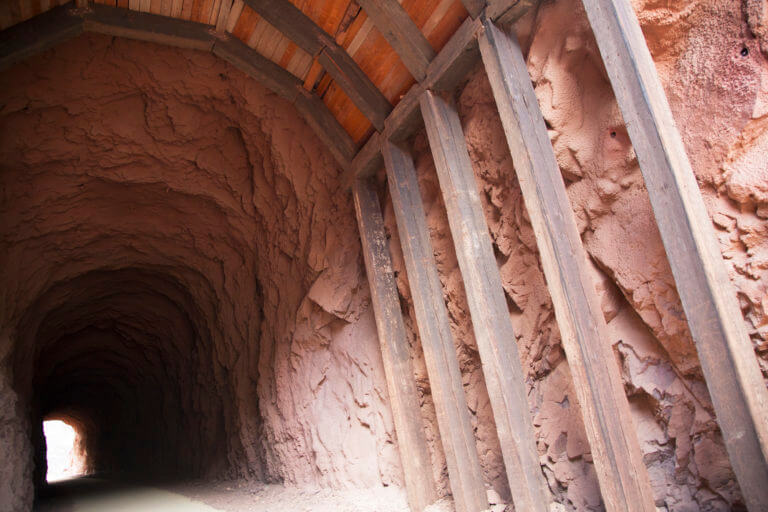 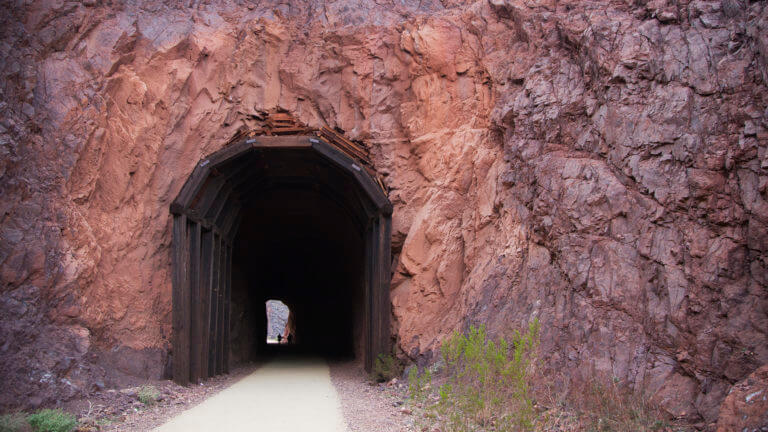 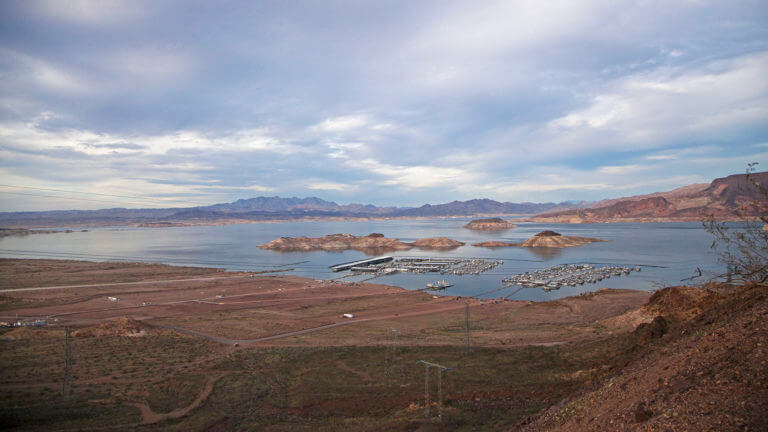 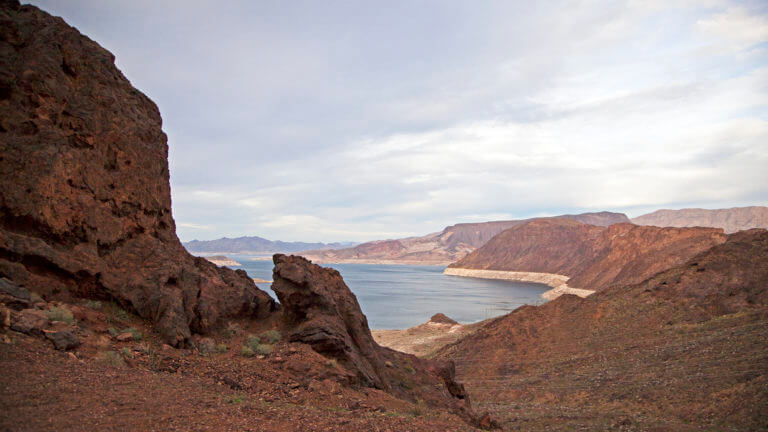