You’ve heard the stories. You’ve seen the movies. However, every story has two sides. What people say happened — and what really happened. Moreover, the only ones that know the real side of the story are the ones who were there.

The Mob Museum in Las Vegas provides a world-class, interactive journey through true stories of the Mob and the law enforcement agencies that fought it. Shadows and whispers. G-Men and Made Men. Whether you like it or not, this is American history.

This eye-opening, authentic view of organized crime’s impact on the world reveals an insider’s look at the events and characters of the continuing battle between the Mob and the law. Real stories are brought to life with engaging, multi-sensory exhibits and unparalleled insights from those on the front lines of both sides of the war.

The Las Vegas Mob Museum offers a provocative, contemporary look at the fascinating topic of the Mob through hundreds of artifacts and immersive storytelling. It brings Mob stories to life so wholly and completely; you’ll feel like you are living them as they’re unfolding around you.

It’s the year 2000— Country Grammar is playing in the background, literally every JT, Brittany Spears, Daft Punk and Vertical Horizon song you know is currently sitting on Billboard’s Top 100, and the federal government decided to sell the former post office and federal courthouse that sat unused in Las Vegas back to the city for a $1.

We were elated, but we had a few catches:

The mayor of Las Vegas at the time, Oscar Goodman, was a former Mob defense attorney and actually had the idea for a mob museum in Las Vegas in 2002. The idea initially received quite a bit of pushback, especially from Italian-American groups, but had support from both the FBI and its former head agent, Ellen Knowlton (who later joined as president of the museum’s board).

To restore both the post office and courthouse, the project was estimated to cost about $50 million, with an extra $26 million to cover proper restoration of the building. It was funded by federal, state and local grants and opened February 14, 2012, at 2:00 PM to the general public.

The Mob Museum is a nonprofit 501(c)3 organization that operates with a mission to advance the public understanding of organized crime’s history and its incredible impact on American society from then to now. If you’re looking for a bold and authentic view of what happened back then, you found it. The movies do some justice to the scene, but the Mob Museum in Las Vegas gives you the real deal of the handlings, dealings, deaths, and undertakings of some of the most prominent mob families in the world.

Through photos, text, displays, interactive techniques, hands-on exhibits and other types of innovative museum display methods (can’t ruin it), you will learn about the Mob’s history of organized crime, Prohibition (and the opportunities it provided), the origins of the FBI, Capone, Eliot Ness and so much more. Visitors can also sit in a replica electric chair, listen to actual wiretaps or train in the use of force training simulator. The Mob Museum also allows you to explore an interactive crime lab exhibit based on true forensic science. Let’s get weird.

The Mob Museum is broken out into four sections: The Basement, 1st Floor, 2nd Floor, and 3rd Floor. You should try and budget two hours to spend in the museum, at least. Once you enter, it’s hard not to wander further down the rabbit hole—there’s a lot to see.

In the Basement, you’ll find The Speakeasy and Distillery where you’ll learn more about the underground agendas of Dons and Goodfellas. Make your way up to Floor One for a history lesson on 100 years of Made Men, listen in to a guided tour and observe actual artifacts and evidence from the Mob era, or participate in a real crime lab experience.

Floor Two is all about the casinos and the Kefauver Hearings and on the 3rd Floor, you’ll learn precisely how the Mob was birthed, what Las Vegas meant to its operations and why Prohibition didn’t really bother too many people that had an in with a coupla good guys back then, ya know?

One of the main attractions of the Mob Museum is on the second floor where the courtroom is located—which was the actual location of one of the 14 National Kefauver Committee Hearings which exposed organized crime held in 1950 and 1951. The Mob Museum also acquired the brick wall where the Saint Valentine’s Day Massacre took place.

The Mob Museum, in true Nevada fashion, does showcase an eerie side as well. This particular museum offers visitors the rare opportunity to view pretty gruesome photographs of victims as well, along with the connections they had to rings and other shady happenings in the area (weak stomachs can skip). 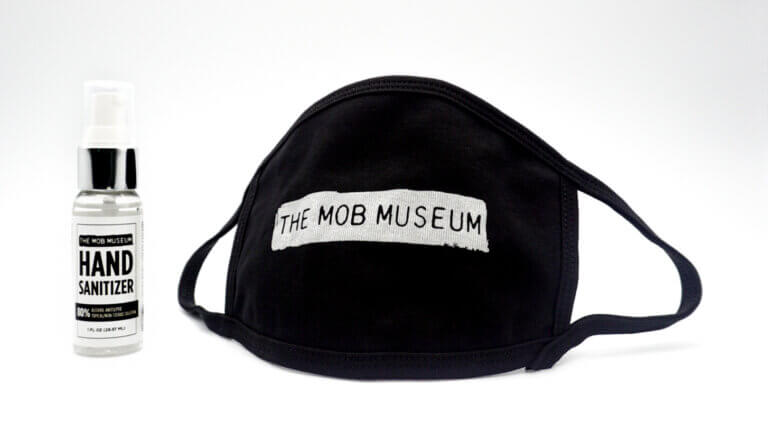 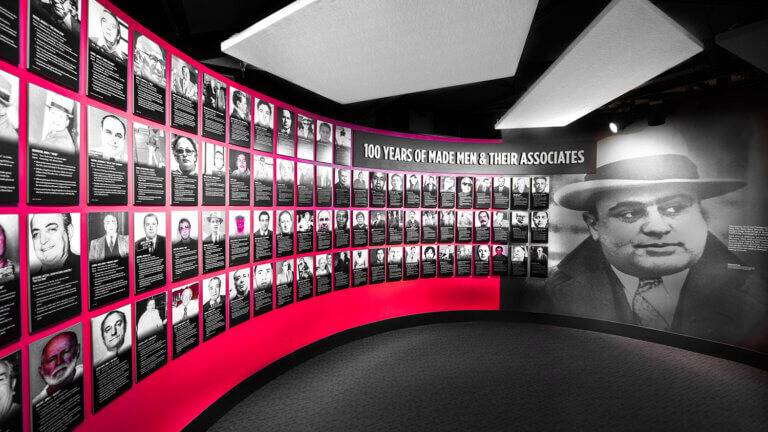 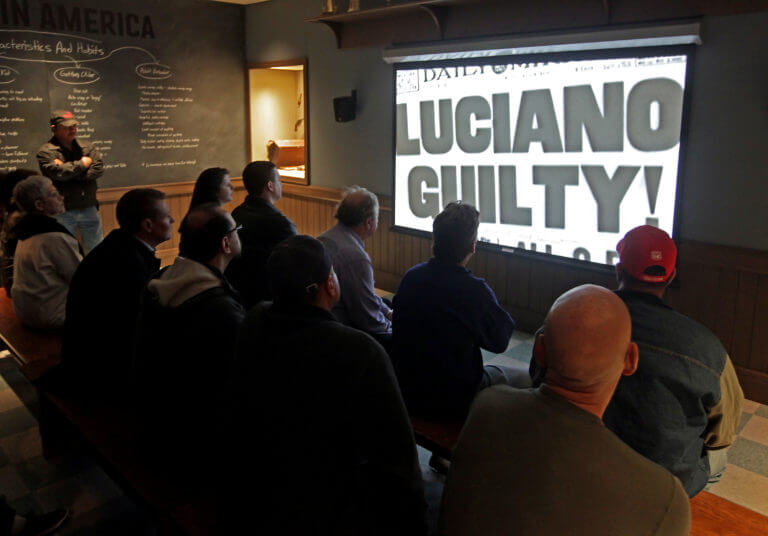 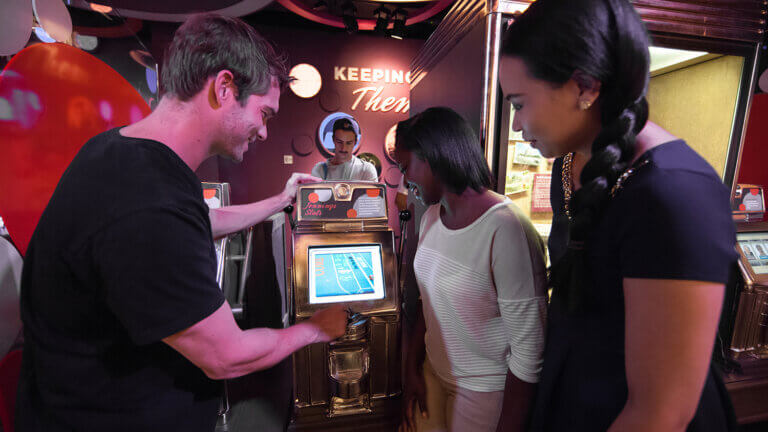 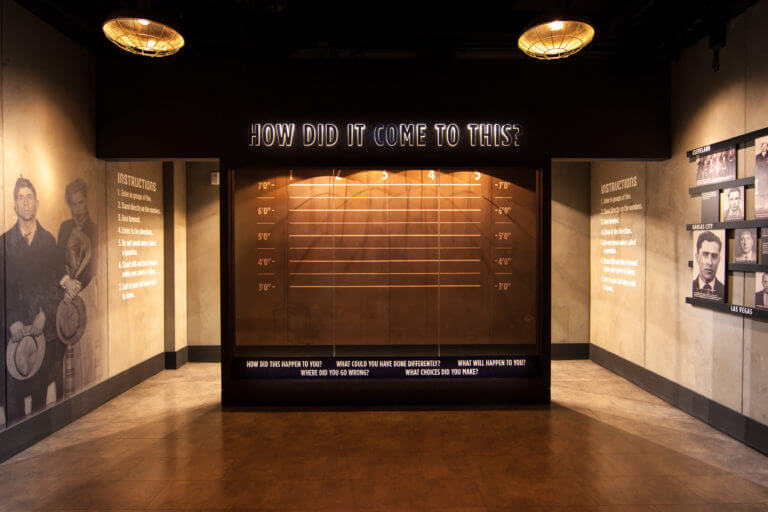 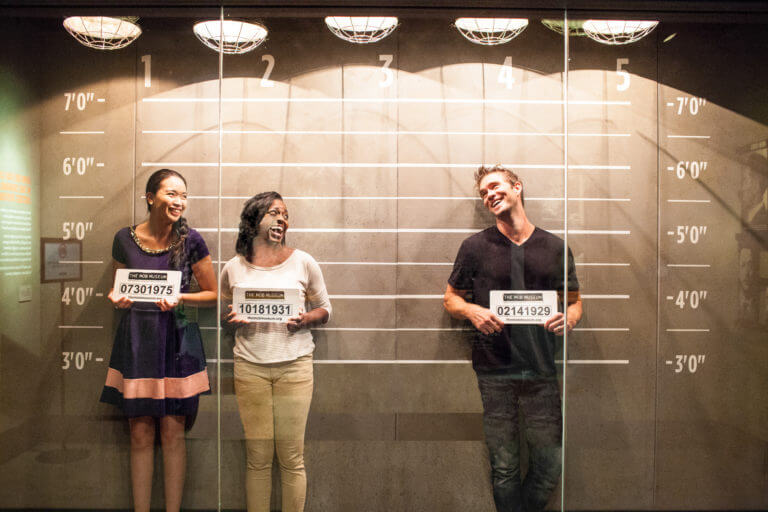 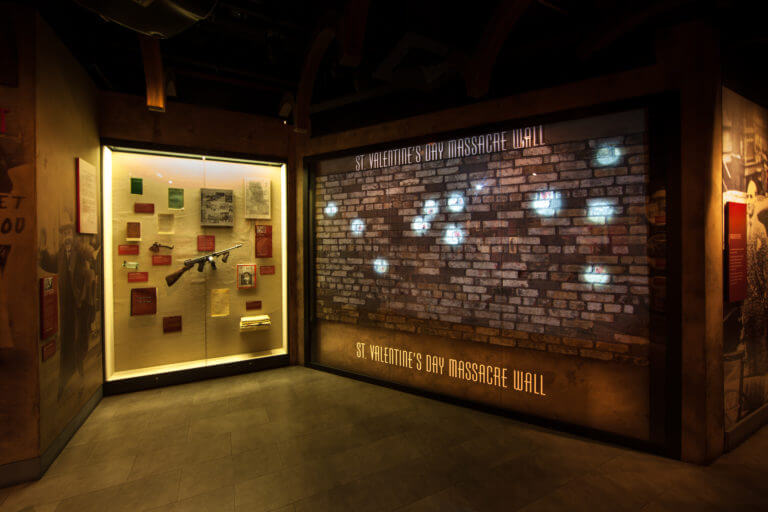