Visiting the small community of Genoa, Nevada’s first permanent settlement, invokes a feeling of nostalgia. And stepping across the threshold of the Genoa Courthouse Museum takes that feeling one step further. Before its renovation to serve as a museum in 1969, the structure served as a courthouse, a community meeting place for both political and social events, and a school.

Visitors touring the Courthouse Museum will find evidence of its past in the original oak furniture that was restored and is now displayed in the courtroom exhibit. Other exhibits in the museum offer a look into early life in the Carson Valley. The valley’s earliest inhabitants are represented by a beautiful American Indian basket that were weaved by Dat-So-La-Lee, a Washo woman renowned for her skills. She used only willow, plant roots and saplings in her baskets as opposed to pine needles and reeds. Another early settler is represented by the Genoa Courthouse Museum’s Snowshoe Thompson exhibit. The display is dedicated to John A. “Snowshoe” Thompson, a man who earned his nickname by using skis to cross the Sierra Nevada as he delivered mail from Genoa to Placerville, California.

Visitors are also given an idea of children’s lives during the 1800s. The antique nursery exhibit features an exquisitely carved, German-made child’s bed as well as a collection of dolls.

Other exhibits at the Courthouse Museum include a Victorian parlor, country kitchen blacksmith shop, jail, and Pony Express room. 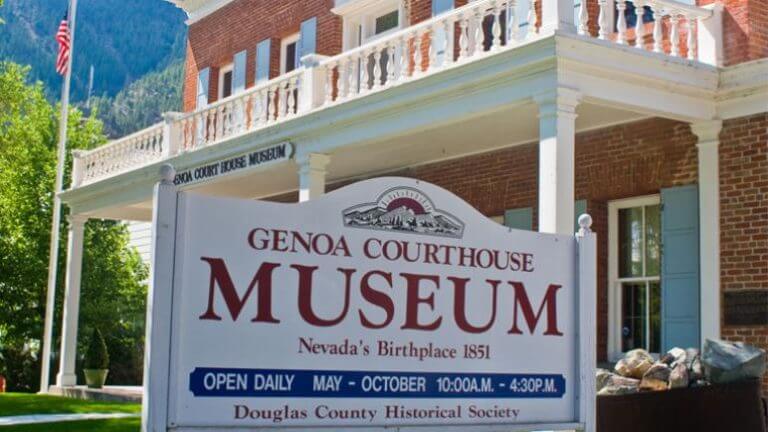