Ready to get to know Las Vegas’ original scene? Long before the towering mega-resorts, Cirque shows, and 24/7 nightlife and entertainment of the Strip came to define Las Vegas forever, there was Fremont Street. Situated north of the Las Vegas Strip in Downtown Las Vegas, Fremont Street was the city’s actual birthplace, famous for block after block of the city’s most iconic neon signs and marquees adorning some of Las Vegas’ first casinos, like Binion’s Horseshoe, the Golden Nugget, the Pioneer Club, and many more.

This famous, six-block stretch of road was a popular hangout for the Rat Pack, showgirls, mobsters, and everyone in between. It was also home to some of the Silver State’s most famous neon signs—earning it the nickname “Glitter Gulch”—creating a picture-perfect backdrop for movies and TV shows. All these decades and millions more lightbulbs later, Fremont Street is open to pedestrian traffic only, beckoning visitors with free nightly concerts across three stages, access to some of the city’s top attractions (including the Neon Museum and Mob Museum), the world’s largest video screen, and 12-story slot machine-inspired zip line soaring through all of it.

Another famous and recognizable neon sign, Vegas Vickie—a buxom cowgirl kicking her booted leg in the air—was recently restored and now welcomes visitors to a cocktail lounge that bears her name at the 2020-opened, adults-only Circa Resort & Casino.

Another famous and recognizable neon sign, Vegas Vickie—a buxom cowgirl kicking her booted leg in the air—was recently restored and now welcomes visitors to a cocktail lounge that bears her name at the 2020-opened, adults-only Circa Resort & Casino.

The History of Fremont Street

Through the years, Fremont Street appealed to everyone from Frank Sinatra, Lola Falana, and Bugsy Siegel to couples and families watching distant atomic blasts from hotel pools. Looking to attract more visitors to Fremont Street, casinos began erecting the world’s flashiest neon signs, including the 90-foot-tall neon cowboy called Vegas Vic, along with double dice, martini glasses, and silver slippers. Today, some of Nevada’s most iconic retro neon can still be found along Fremont Street, thanks to careful preservation from the Neon Museum.

Previously open to vehicles, this six-block stretch of famous roadway was converted into a pedestrian mall in 1996, officially transforming into the Fremont Street Experience. In 2004, a barrel vault canopy spanning four whole blocks was built over the Fremont Street Experience, which now features an astonishing 49 million LED lights shining so bright the canopy can operate video shows even in the daylight. The Viva Vision canopy is the largest video screen in the world, running hourly nighttime shows that pay homage to some of Nevada’s most well-known character traits, like Area 51, race car driving, patriotic displays, and more. When light and sound shows are not playing, music continuously plays on a 550,000-watt sound system that runs the entire length of the Fremont Street Experience.

One of the Fremont Street Experience’s newest additions is the Slotzilla Zip Line, which launches riders off a 12-story tower that stretches all the way over the entire pedestrian mall. Thrill-seekers can choose to begin at 77 feet or 114 feet high before soaring superhero-style beneath the LED canopy, gaining a literal overview of the Fremont Street Experience and all the celebrity impersonators, live music, and revelers below.

Fremont Street in Las Vegas is home to the Golden Nugget Casino, which houses a 200,000-gallon shark aquarium, which you can view from behind glass, ride through on a waterslide, or get up close and personal with on a guided tour hosted by one of the Golden Nugget’s marine biologists. On the tour, you can witness feeding time and learn all about the different types of sharks. Also inside the Golden Nugget Hotel, don’t miss the “Hand of Faith,” a 62-pound solid gold nugget—the world’s largest—discovered in Australia in 1962.

No admission is required to access the Fremont Street Experience pedestrian mall, and most events and nightly concerts within are also free. 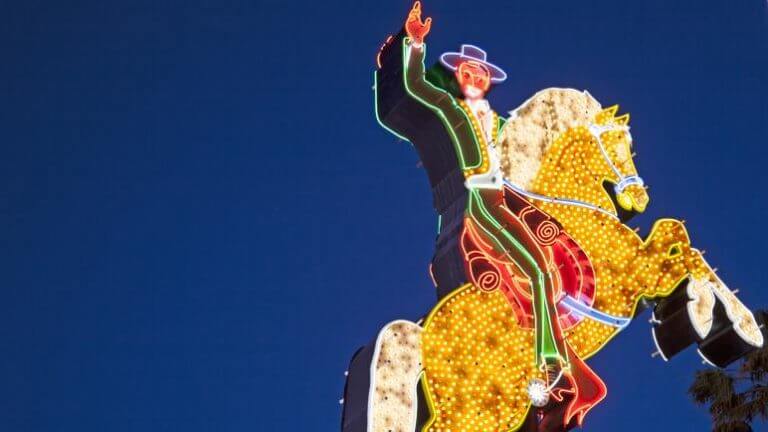 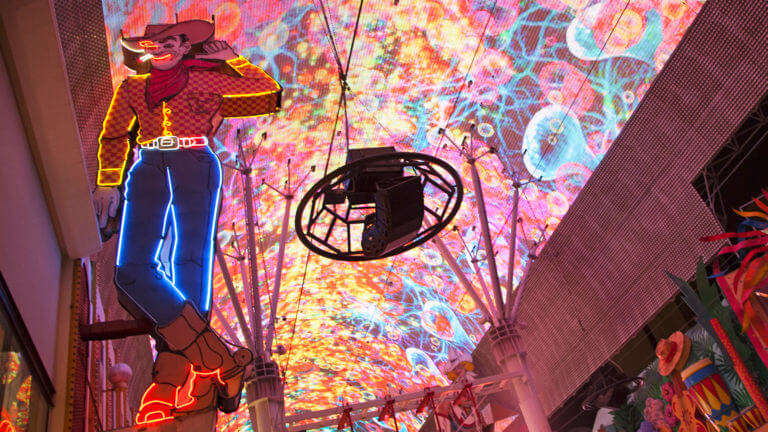 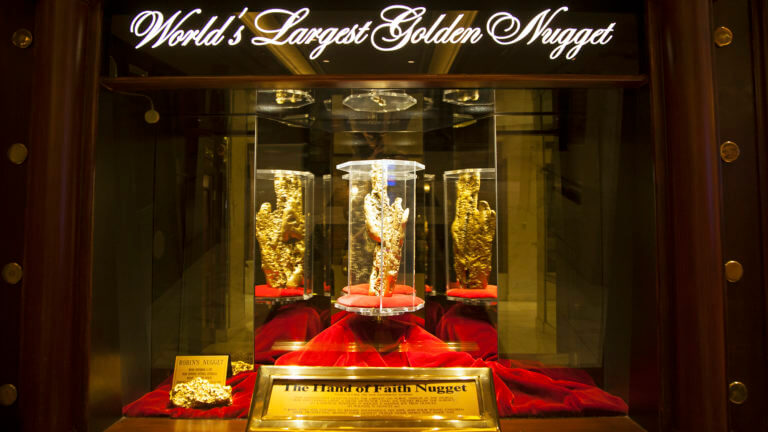 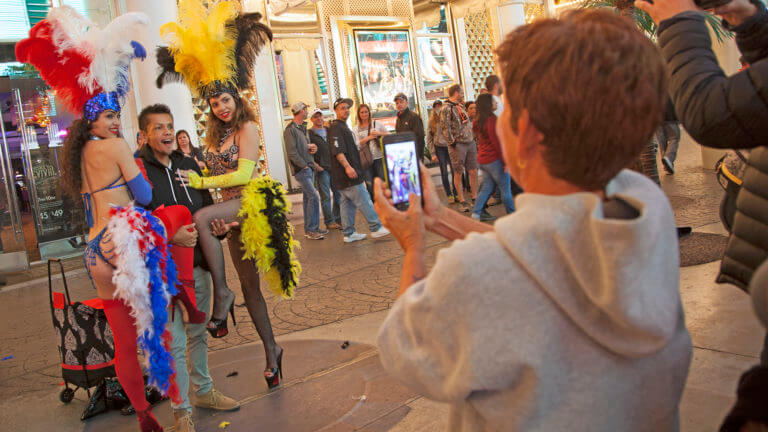