The Best of Valley of Fire – Sunrise to Sunset

Valley of Fire is a Nevada State Park known for its stunning red sandstone rock formations which illuminate the valley—especially at sunset—making it look appear as though it’s on fire. Entwined among the valley’s red rock wonderland are remnants of prehistoric locals and unparalleled vistas, too.

Ancient petroglyphs were carved into red sandstone rock formations at Valley of Fire State Park—a remnant from the Ancestral Puebloans living in and around the modern-day Moapa Valley area 2,500 years ago. By the mid-1860s, Mormon missionaries settled St. Thomas, where they began ranching, farming, and mining in the region. Interestingly enough, St. Thomas was flooded by the waters of Lake Mead during Hoover Dam construction in the early 1930s.

In 1931, a transfer of 8,760 acres of federal land to the state of Nevada began the creation of Valley of Fire State Park. The Civilian Conservation Corps (CCC) built the park from 1933 through the early 1940s, making campgrounds, stone cabins, trails, and roads. The park opened in 1934 and was officially designated Valley of Fire State Park in 1935, becoming Nevada’s first state park.

How the Valley of Fire Got Its Name

Before Valley of Fire became a designated Nevada State Park, a road was built through the valley as part of the Arrowhead Trail to connect Salt Lake City and Los Angeles. In the 1920s, the “Valley of Fire” was named by a AAA official who was traveling the road at sunset and reportedly explained that the entire region looked like it was on fire.

Those hoping to discover more about the valley’s history will find a great visitor center that features comprehensive interpretive displays and exhibits with information on local ecology, geology, and prehistory. And don’t miss out on a short stop at Elephant Rock, located next to the east entrance (It resembles an elephant. It’s hard to miss.); Arch Rock, which can be seen from the Scenic Loop near Atlatl Rock; and the Fire Wave, which is probably one of the most gorgeous spots in the Valley of Fire with white and red zebra stripes that create incredible photo opportunities.

Located in the Mojave Desert, Valley of Fire State Park is home to 46,000 acres of red Aztec sandstone, formed by shifting sand dunes 150 million years ago, which is blended with gray and tan-colored limestone. The stunning landscape glows red for miles into the horizon and is particularly beautiful at sunset. With elevations ranging from 1,500 feet to 3,000 feet, here are some popular Valley of Fire hikes that are easily accessible to visitors who want to explore Valley of Fire from Las Vegas as a day trip, or for those who are camping in the park.

A wander through Valley of Fire State Park’s many fascinating trails will take visitors past incredible formations like the White Domes, which are white sandstone rock formations known for their brilliantly contrasting color to the surrounding red sandstone rock formations. Visitors can hike the White Domes Trail, which is a loop that shows off the park’s stunning scenery (including desert vistas) and reveals the namesake colors of the rock, a slot canyon, caves, and even a historic movie site where the 1966 film The Professionals was shot.

Atlatl Rock is another ultra-accessible and wondrous site in Valley of Fire that features amazing examples of prehistoric petroglyphs. Atlatl is a tool used to launch a spear, and ancient Indians carved symbols of the atlatl in the sandstone located at Atlatl Rock.

If you’re interested in seeing more petroglyphs in Valley of Fire, don’t miss a hike to Mouse’s Tank, which is a natural rock basin in a canyon where rainwater collects. You can hike from the trailhead to Mouse’s Tank and back and see prehistoric petroglyphs along the trail.

Download the complete list and map of Valley of Fire trails (link to attached PDF which will be uploaded to TravelNevada.com)

Valley of Fire State Park is especially stunning in the early morning and at golden hour. Experience these magic moments for yourself by snagging a first-come, first-served campsite (group campsites can be reserved in advance). Any non-campers in the park before sunrise or after dark are considered trespassers and will be ticketed. Valley of Fire is also Nevada’s most visited state park, so be sure to plan your overnight visit long in advance.

Those who plan ahead can choose from 73 total campsites, including popular ones like Arch Rock campground. There are also three group camping areas in Valley of Fire State Park that will accommodate up to 45 people, and RV camping is an option, too. Whether you’re coming from across the country, across the world, or just driving up to Valley of Fire from Las Vegas for the day, the park is accessible to everyone.

Shady picnic spots with nearby restrooms can be found at Atlatl Rock, Seven Sisters, White Dome, and the Cabins, which are historic stone structures built with native sandstone in the 1930s by the Civilian Conservation Corps.

As you hike along the trails, pay close attention to the Valley of Fire’s plants and flowers. Cacti like beavertail and cholla are plentiful and adorn the desert floor along with creosote bush, burro bush, and brittlebush. Spring is one of the most beautiful times of year to visit because desert marigolds, indigo bush, and desert mallow bloom cast their beauty into the Valley of Fire State Park and permeate the air with the subtle smell of desert flowers.

Because of the area’s warm summer temperatures and its rock and desert topography, most of the animals that live in and around Valley of Fire are nocturnal. Snakes, lizards, coyotes, bobcats, badgers, fox, jackrabbits, skunks, and antelope ground squirrels all reside in Valley of Fire State Park. It’s rare to see a desert tortoise, as they burrow underground for protection from the sun and cold. If you’re lucky, you’ll see Nevada’s state animal, the Desert Bighorn Sheep!

While winter temperatures range from freezing to 75 degrees, Valley of Fire State Park weather over the summer often has highs exceeding 100 degrees Fahrenheit. The landscape offers little shade, so plan your hikes ahead and pack your hat and sunscreen. Summer temperatures may vary from hot during the day to cool at night, so check the forecast and be prepared for the degree range. The annual rainfall averages four inches.

The best time to visit the park is between October and April when the temperatures are cooler. If you can’t avoid the summer season, get your hikes in early morning or later in the day.

Getting to Valley of Fire from Las Vegas in Nevada

Valley of Fire State Park is open seven days a week from sunrise to sunset. While there is 24-hour access to the campgrounds, if you are within park boundaries before sunrise or after sunset and are not an overnight camper, it’s considered trespassing and you can be ticketed. 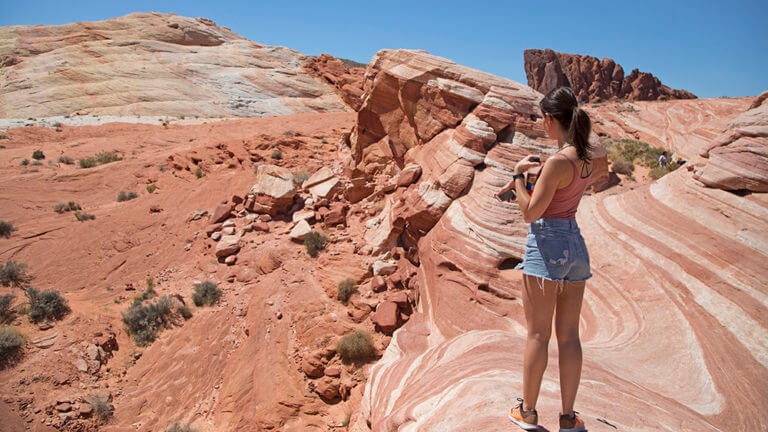 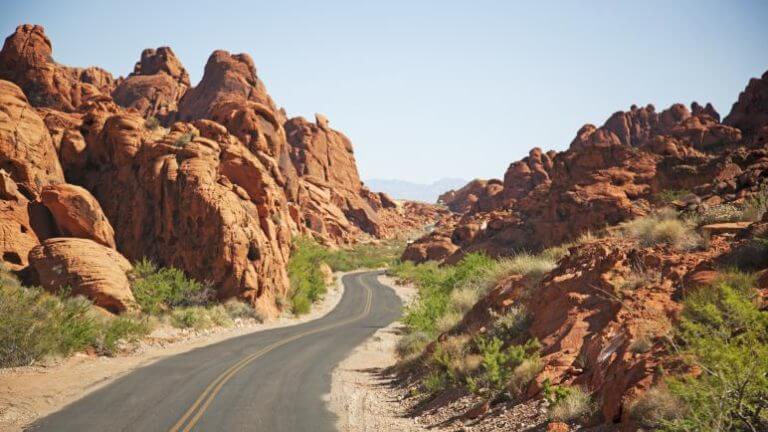 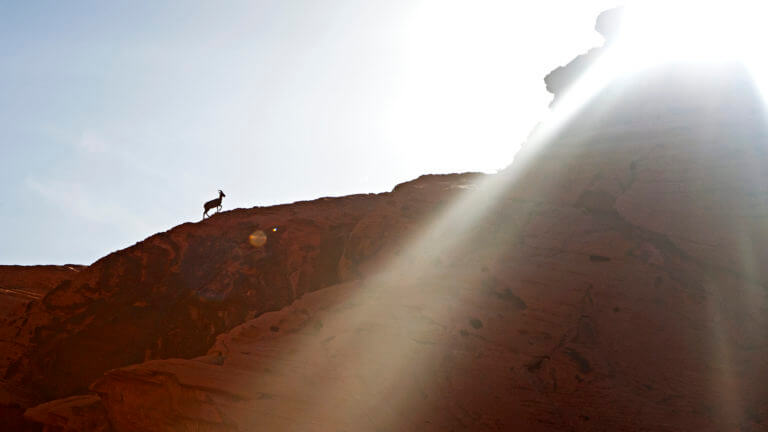 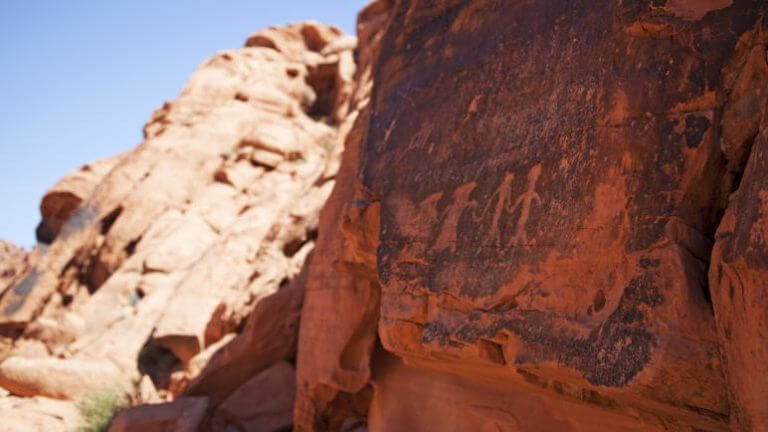 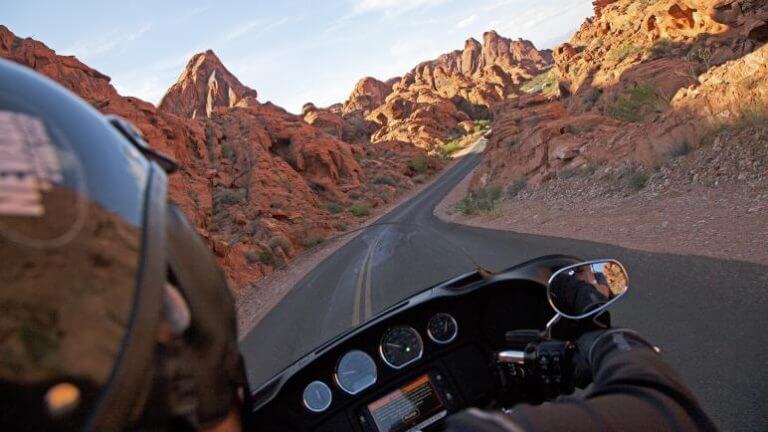 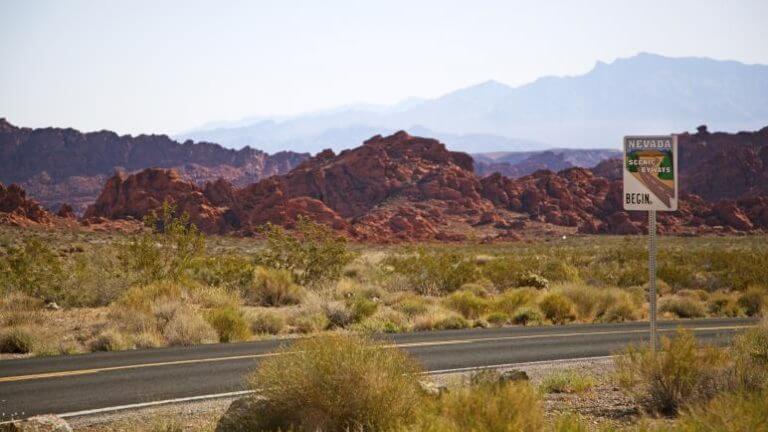 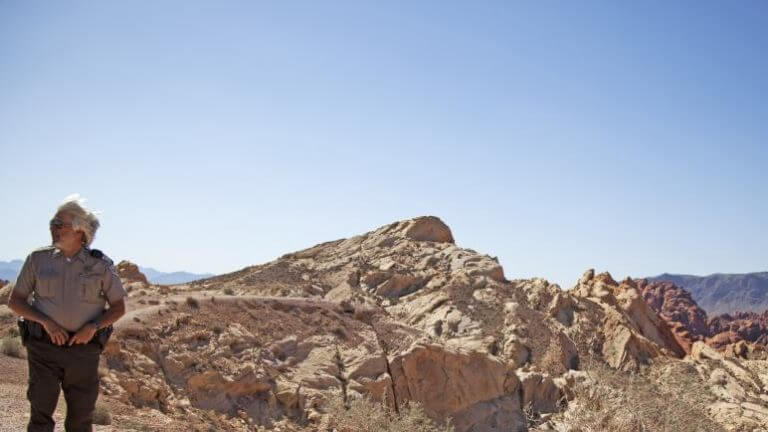 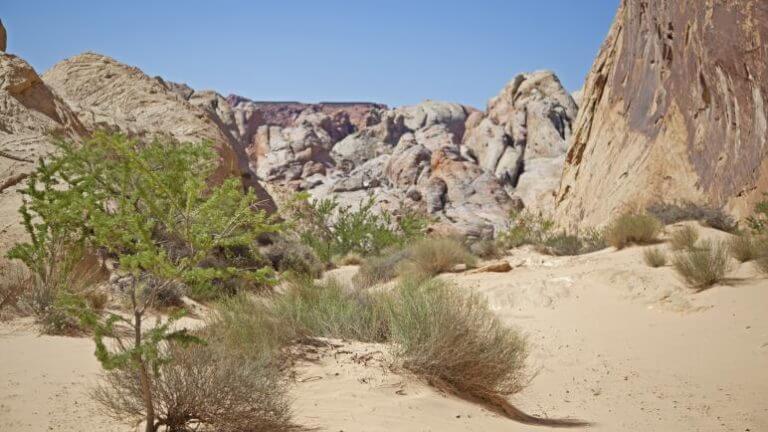 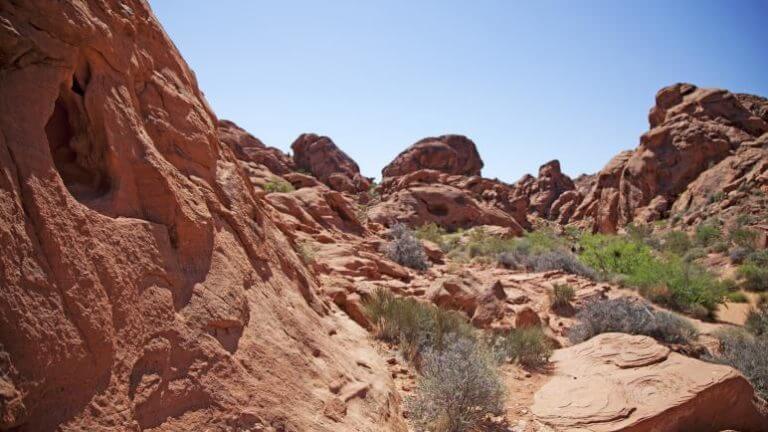 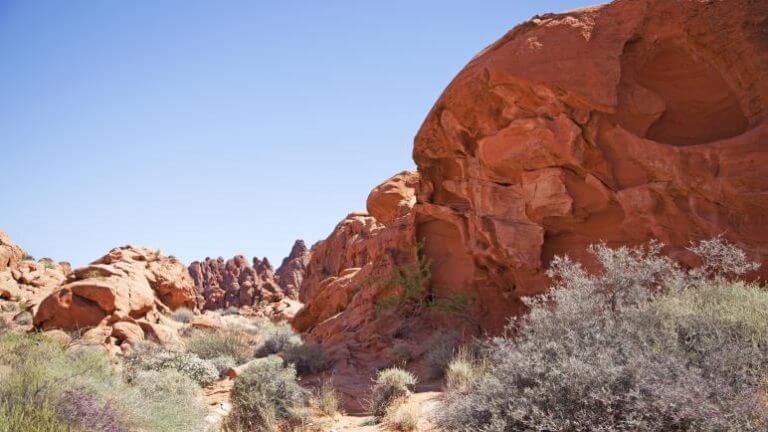 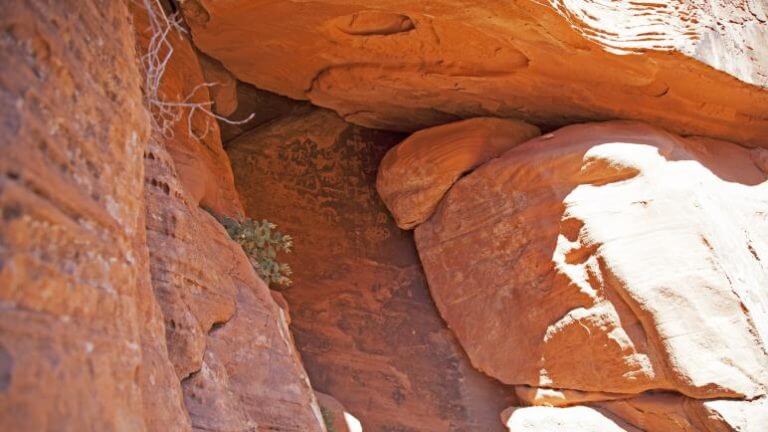 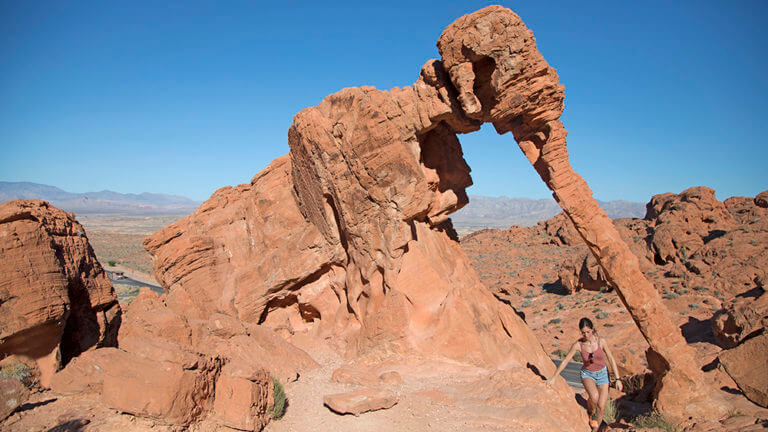 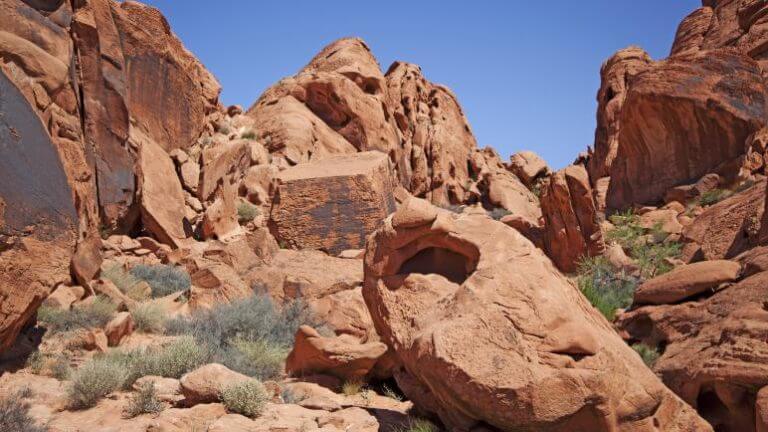 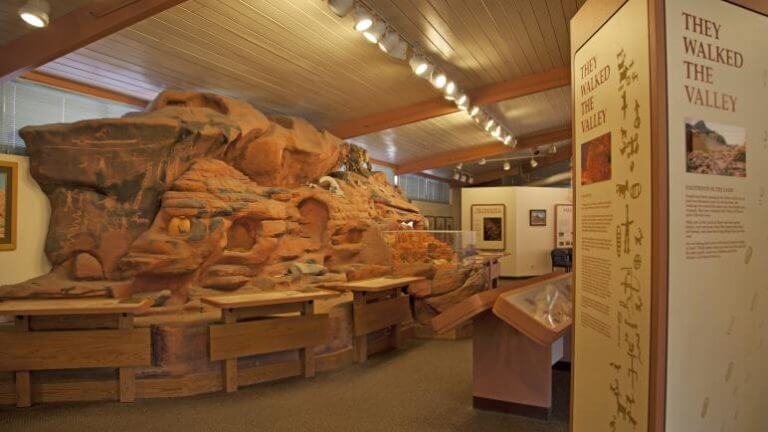 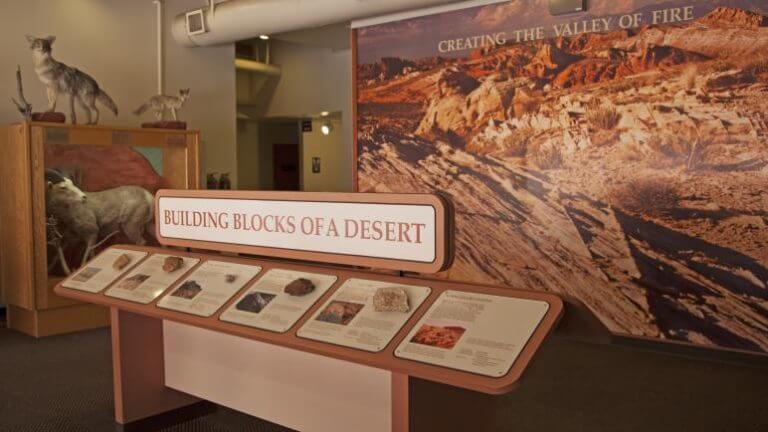 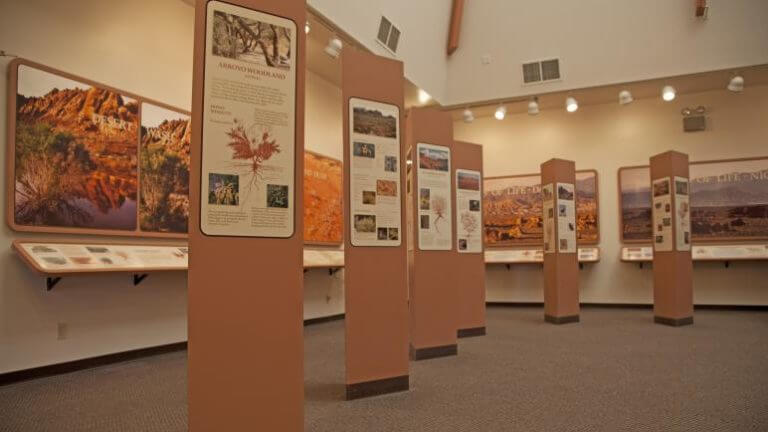 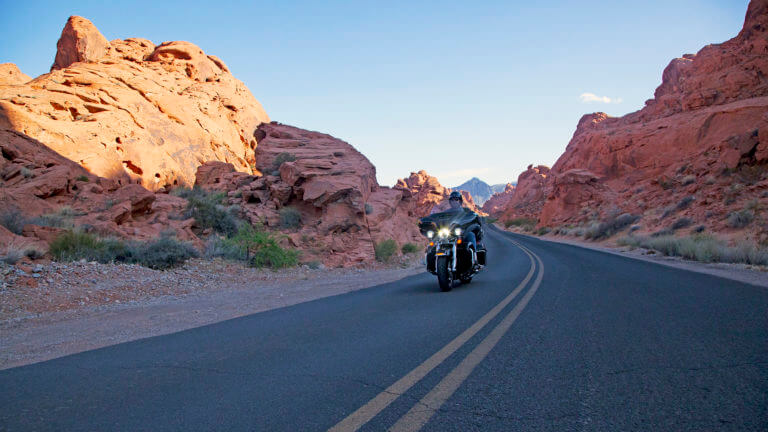 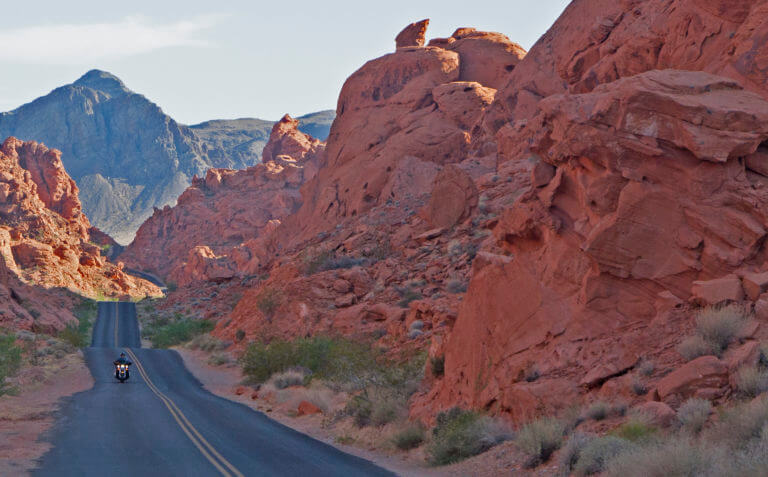 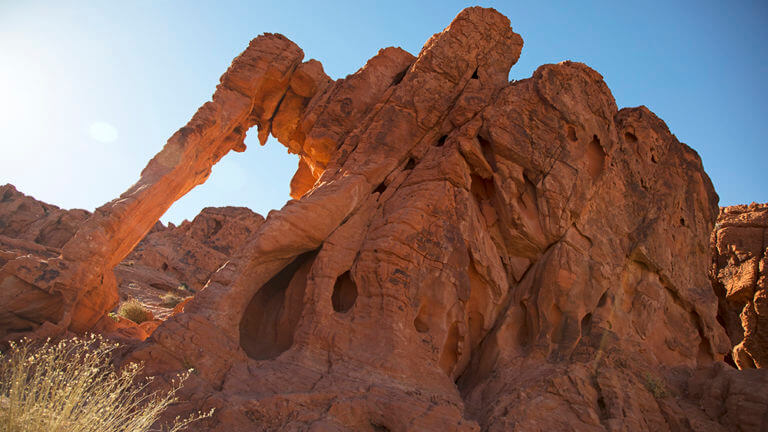 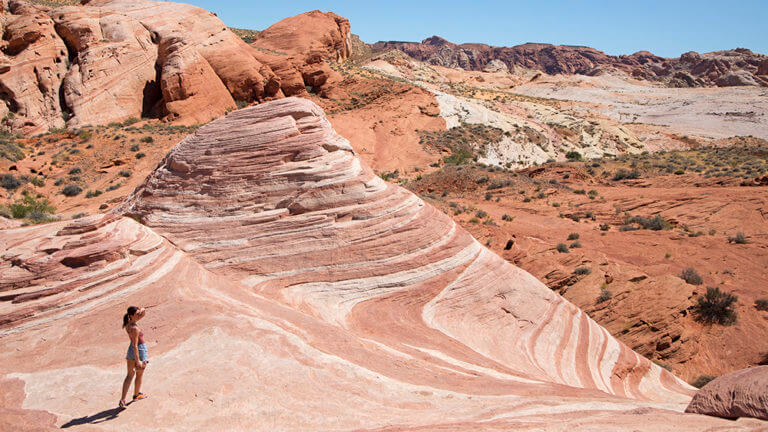