If you’re looking for some off-grid solitude in some truly stunning landscapes, head north of Reno to the alluring and mysterious Black Rock Desert. This vast landscape is managed by the Bureau of Land Management and is comprised of 1.2 million acres of national conservation area and national wilderness area, which means this is the largest collection of publicly managed land in the continental U.S. Aside from the fact that the area has some of the most rugged canyons, pristine hot springs, and expansive dry lake beds or “playa” features in the state, this area is also federally protected to preserve 180 miles of historic emigrant trails used by early pioneers. 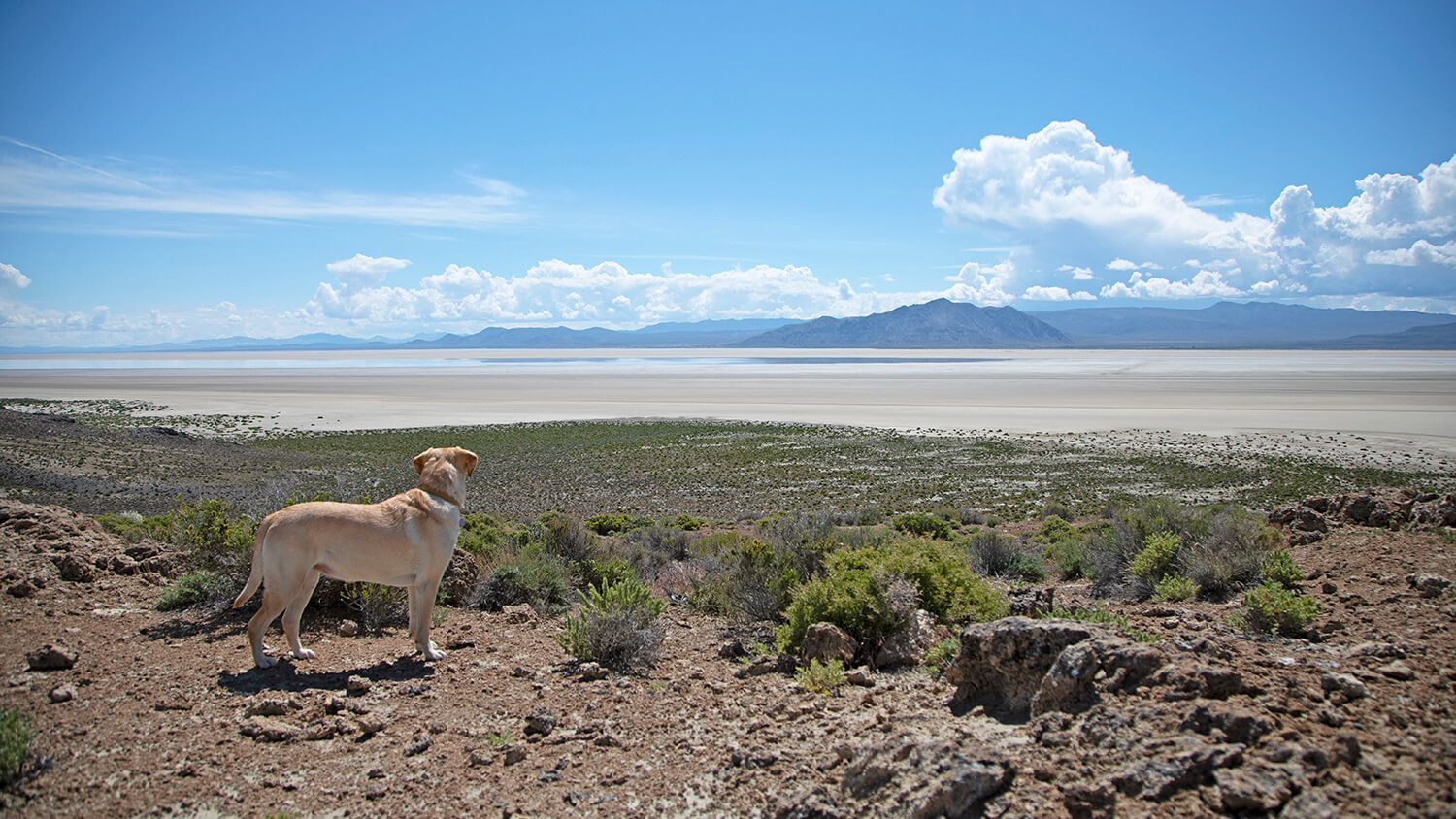 Early explorers often referred to this section of the Lassen/Applegate Trail in the early 1850s. Thousands of 49ers traversed this section of Nevada, braving the most dangerous and remote sections of the entire trail. If you pay close attention, you can spot a multitude of wagon tracks in the area. Plus, be sure to keep an eye out for historical markers peppered throughout the Black Rock – High Rock Emigrant Trails National Conservation Area, featuring quotations from pioneer journals on plaques fixed to waist-high rails.

American Indians resided in this area long before pioneers made their way west and re-discovered the area. The original people of the Great Basin lived in this area about 10,000 years ago, and while they recorded their history here through petroglyphs, there wasn’t a serious need to create a permanent dwelling and it was easier if they moved throughout the region as seasons changed.  Today, the Summit Lake Indian Reservation lies directly to the north of the Black Rock Range Wilderness area, and the Pyramid Lake Indian Reservation lies directly to the south of the NCA. 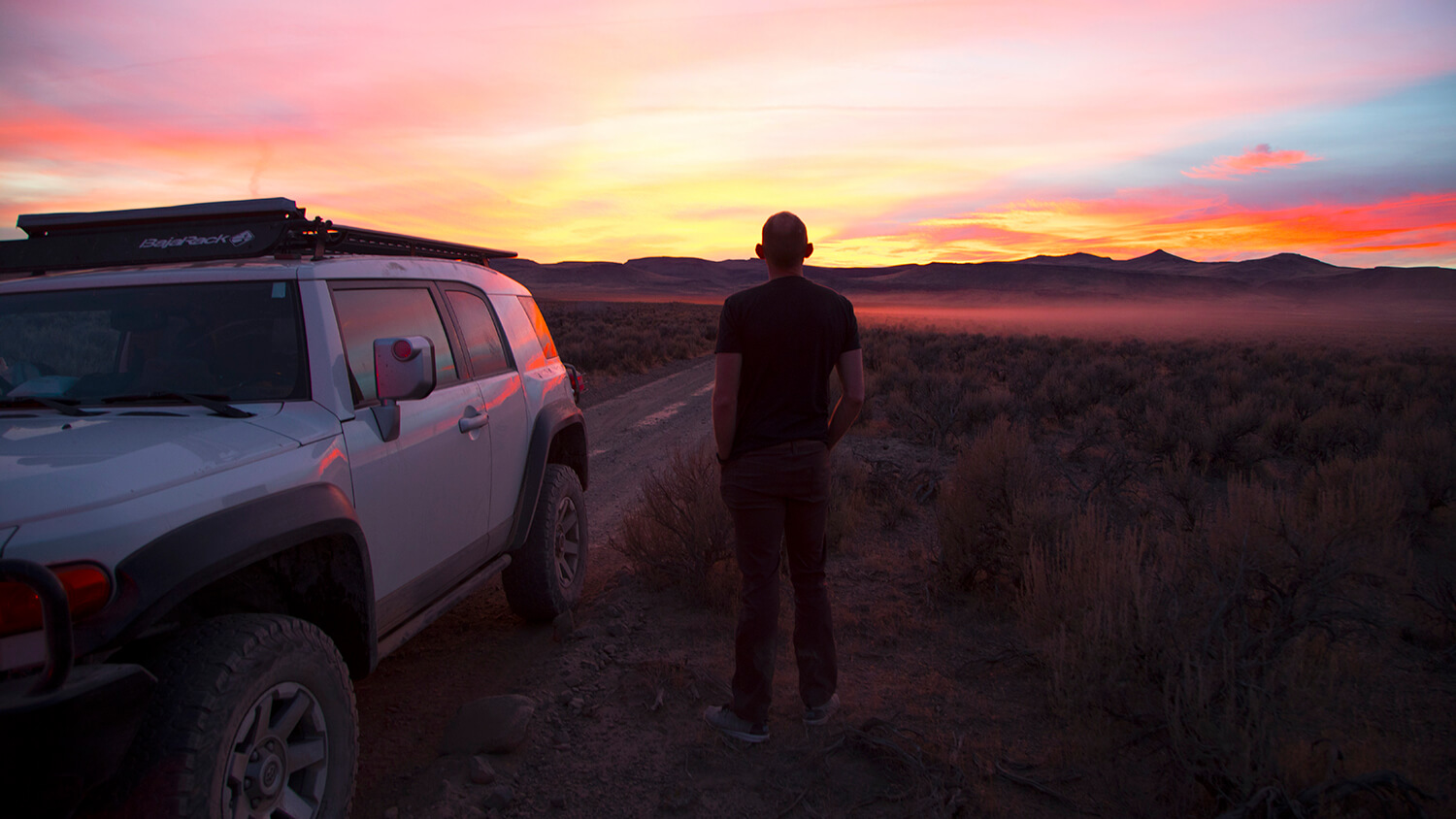 A stunning 752,000 acres of the Black Rock – High Rock Emigrant Trails National Conservation area is comprised of TEN wilderness areas. Each truly has something for everyone to get excited about. From intense off-roading and historical interests to hot springs, rock climbing, camping, wildlife, you name it, there is a little bit of everything up here to suit everyone’s adventure goals. These include the Black Rock Desert, Calico Mountains, East Fork High Rock Canyon, High Rock Canyon, High Rock Lake, Little High Rock Canyon, North Black Rock Range, North Jackson Range, Pahute Peak and South Jackson Mountains. Additional points of interest worth checking out are…

Despite the fact that the largest party in the world (Burning Man) goes down on this otherworldly surface once a year, the land speed record was once set on this vast and desolate dry lakebed. Also referred to as a playa, a hard-to-imagine 763 miles per hour was set in a 20,000-pound vehicle on the Black Rock Desert by a British team in 1997. What’s more interesting is the fact that this was the first time a land-based vehicle broke the sound barrier. There are few places on this planet that are flat enough over a long enough distance to safely allow a vehicle to reach such tremendous speeds, and the Black Rock Desert happens to be one of them. 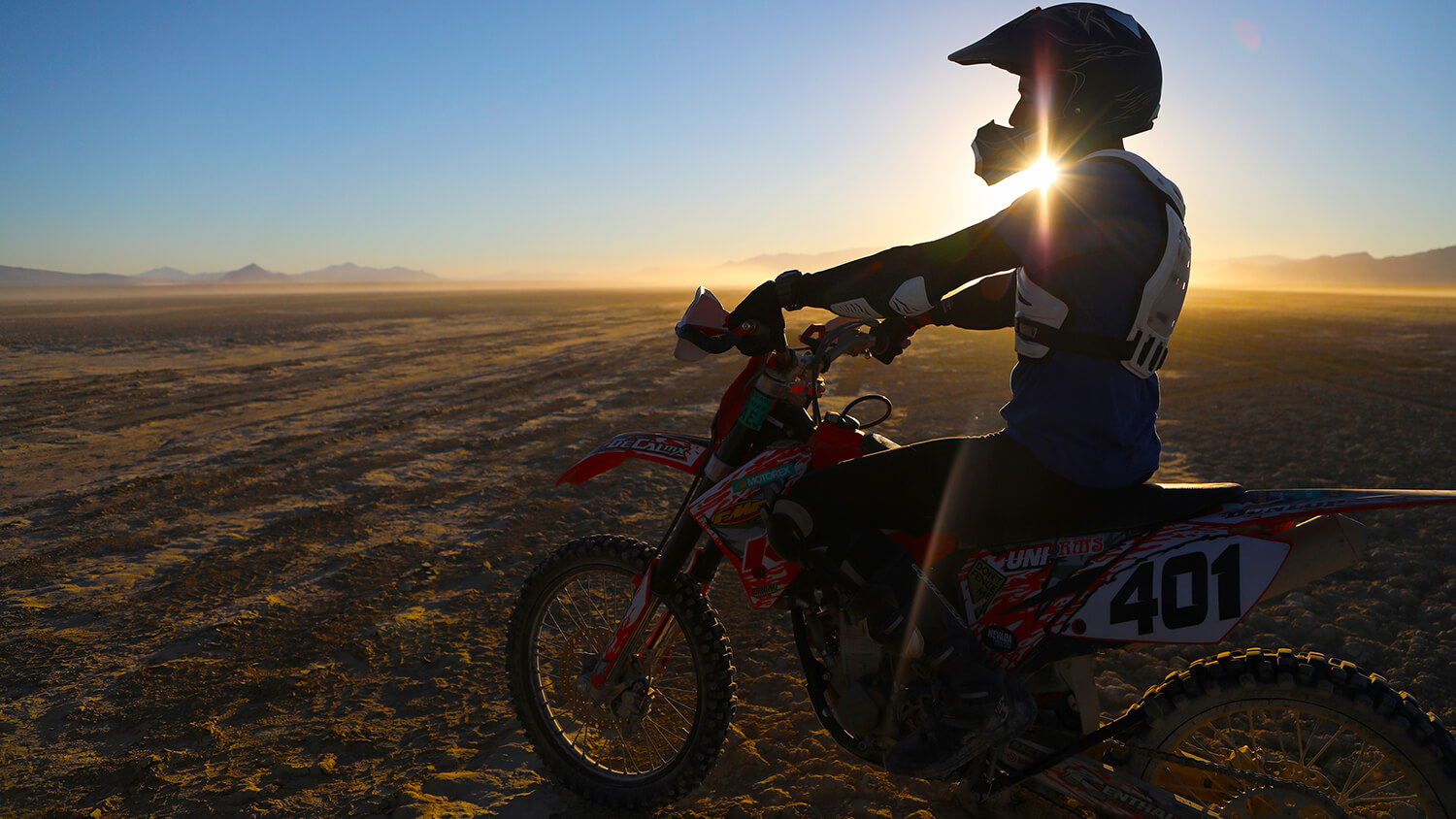 It’s true that the largest party in the world goes down on this otherworldly surface once a year, but that’s not all. The world land speed record was once set on this vast and desolate dry lakebed. Also referred to as a playa, a hard-to-imagine 763 miles per hour was set in a 20,000-pound vehicle on the Black Rock Desert by a British team in 1997. What’s more interesting is the fact that this was the first time a land-based vehicle broke the sound barrier. There are few places on this planet that are flat enough over a long enough distance to safely allow a vehicle to reach such tremendous speeds, and the Black Rock Desert happens to be one of them. 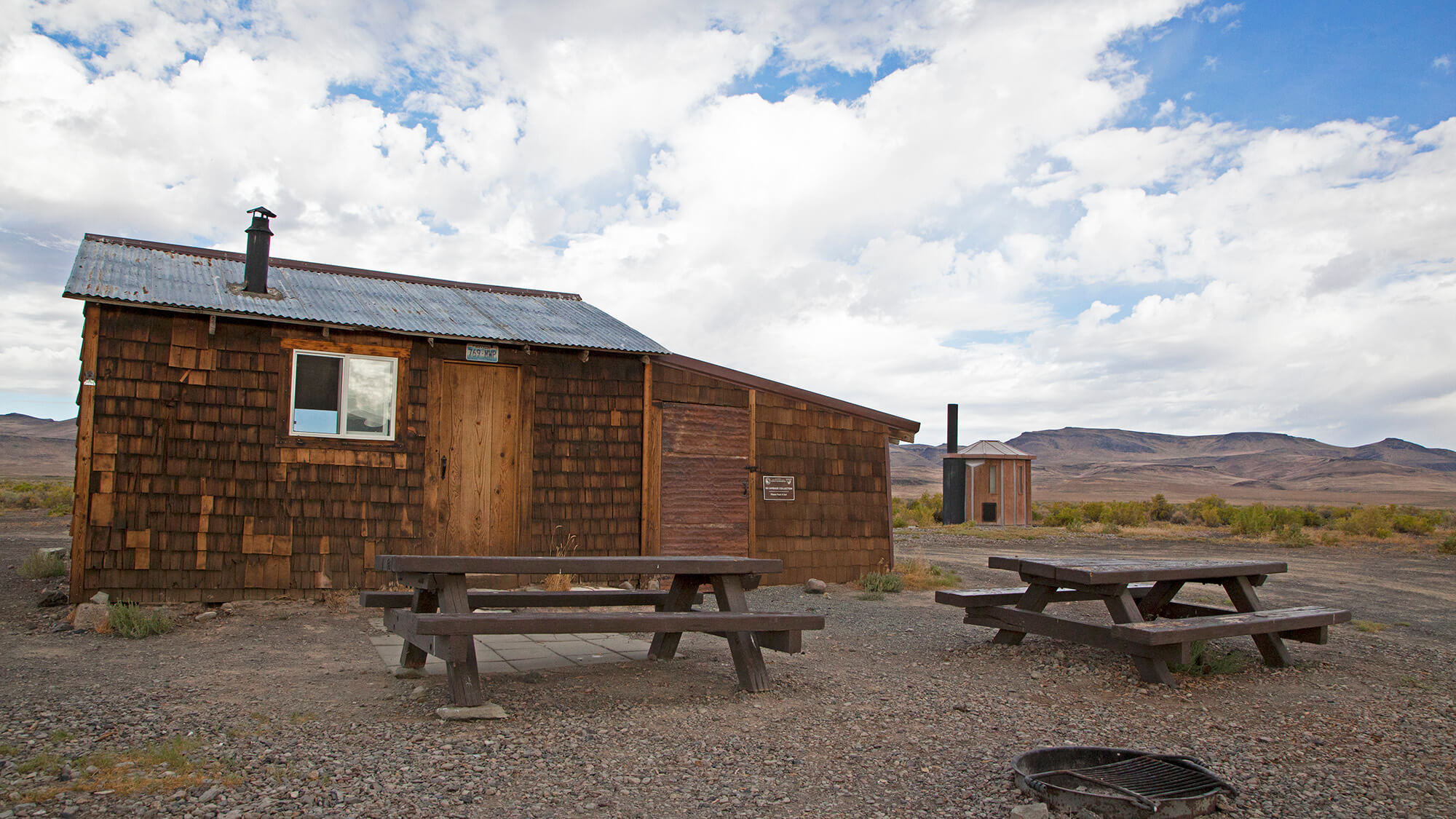 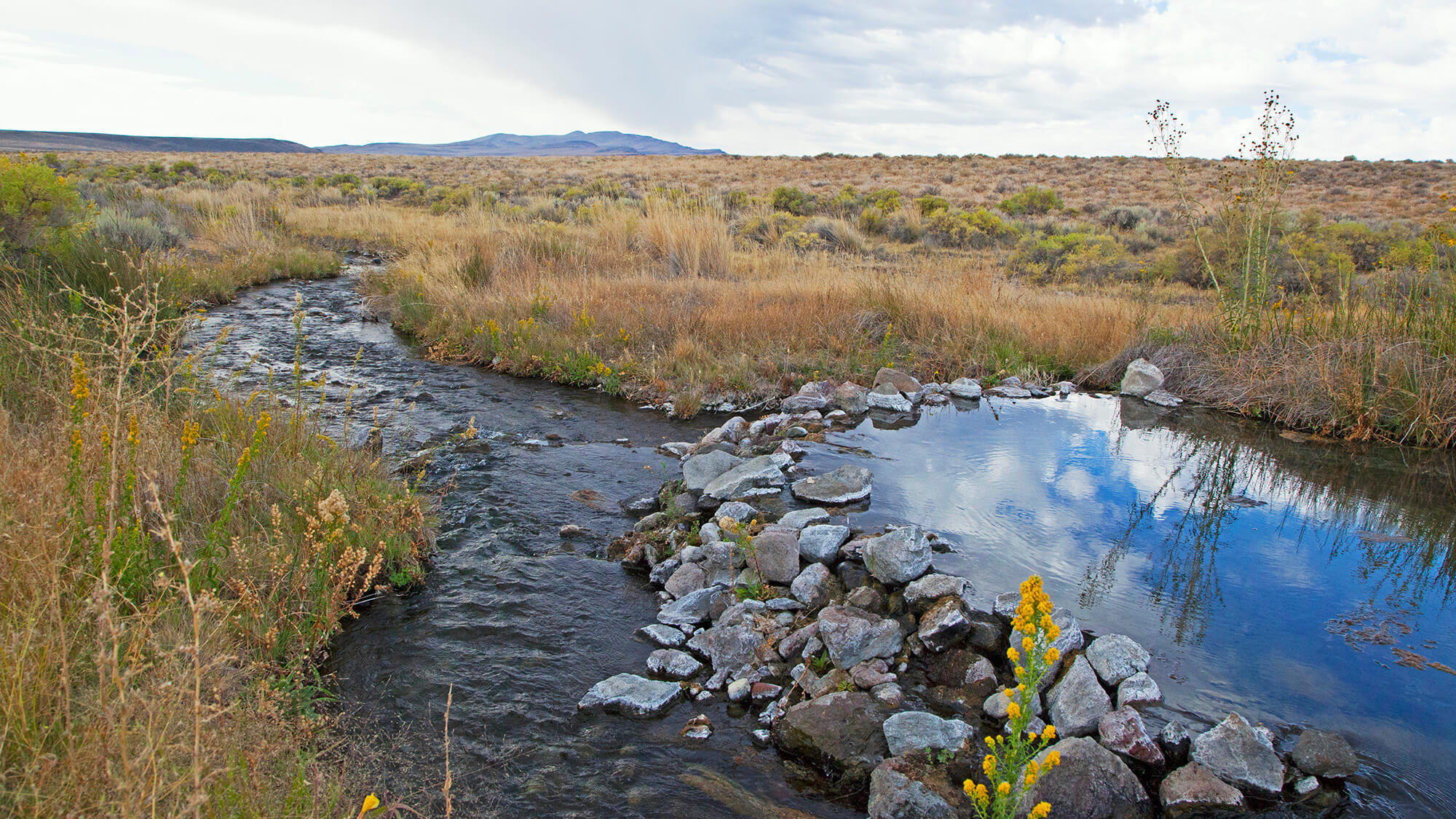 If you want to up your hot springing game, Soldier Meadows is the place to be. The entire meadow is fed by both warm and cool springs and fascinatingly enough, is home to a species of fish and snail that aren’t found anywhere else on earth. A hot river of sorts is found in the meadow, with several dammed up areas that make for the perfect soak. Primitive campsites are peppered throughout the area, and a first come first served BLM cabin is on site and open to the public as well.  If complete desolation is what you’re after, Soldier Meadows might not quite hit the mark as it’s considered to be the “high traffic” area of the NCA… but what that really means is you might see a half dozen cars throughout the course of the entire day. (You also very well might not!)

Located just a few miles from the hot springs is Soldier Meadows Lodge & Ranch, but was once the original site of a winter cavalry outpost that gave the area its name. This group of military was stationed here to protect early pioneers from ‘hostile Native Americans’ as they made their way west. Shortly after the military moved out, ranchers moved in to graze livestock in the meadows, which has continued to this day. One of the largest hot springs in the area is maintained by the Soldier Meadows Lodge & Ranch—be sure to check in with them first prior to taking a dip.

EDITORS NOTE: Soldier Meadows Lodge & Ranch is temporarily closed to a change in management. Please check back for updates! 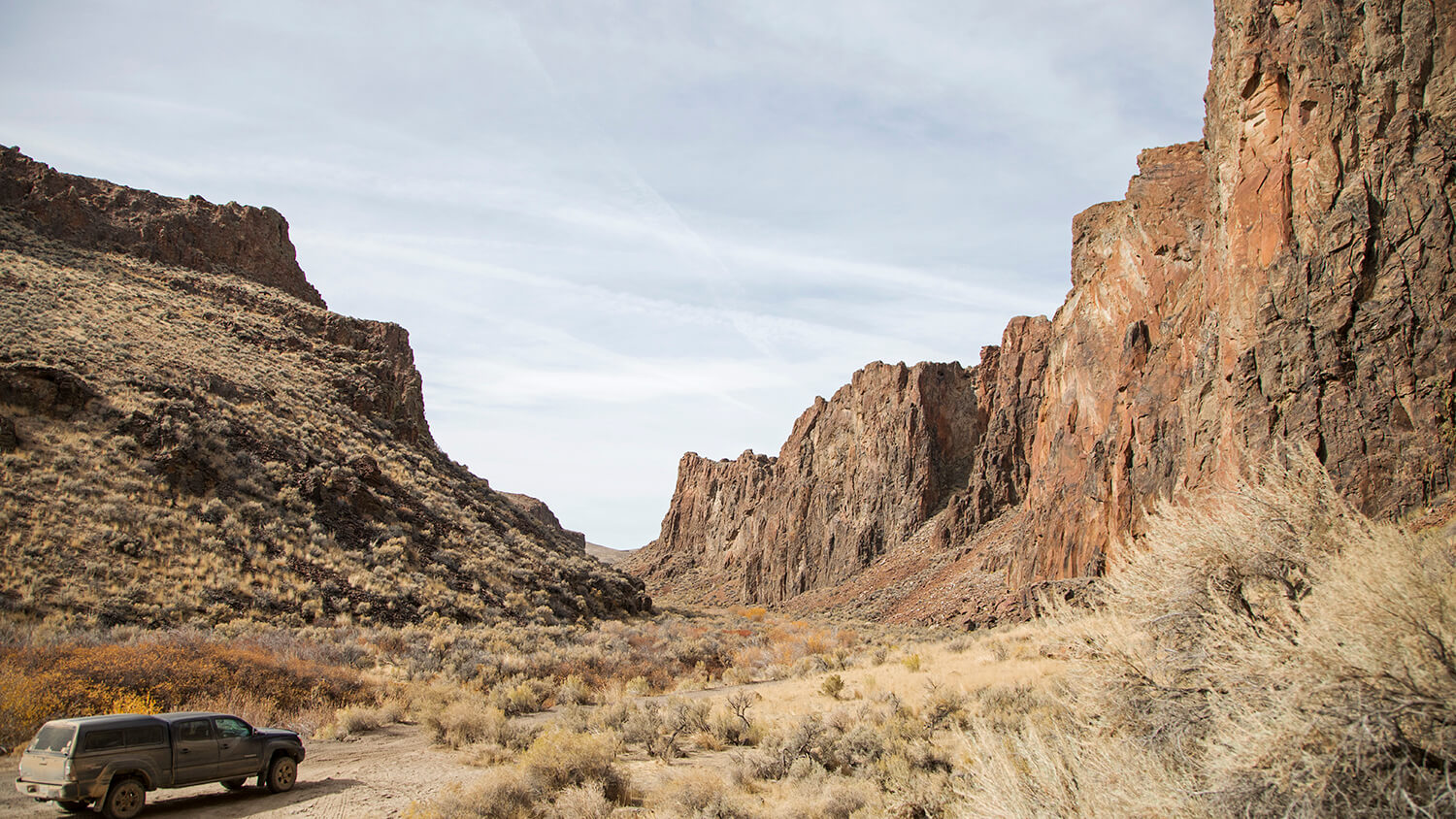 Perhaps one of the most spectacular areas within the National Conservation Area is Fly Canyon and High Rock Lake. Unique geological features exist here, that were created close to 12,000 years ago after a large rockslide closed the original canyon. The new outlet [Fly Canyon] cut a narrow canyon that empties at Soldier Meadows. One particularly special geologic feature is the potholes, which were carved by whirlpool action of sand and gravel in the stream, when massive floodwaters washed through the canyon.

As you get deeper into this extremely remote section of Nevada, you’ll come across Hardin City, a mining camp established in 1866 when prospectors through they had found James Hardin’s lost deposit of silver. As a result from all the hype, quite a few prospectors flocked to the area to build stamp mills. But, when no actual silver materialized, the town quickly vanished after eager miners moved on to more lucrative communities. Today, a few stone foundations and other small relics can be found in the area.

Stephens Camp is what’s left of an old buckaroo or cowboy camp—once owned by Tennessee Ernie Ford, the famous crooner of the classic country song “Sixteen Tons”—but includes a three-room cinder block cabin with a propane and wood stove. Visitors should plan on bringing their own supplies, like wood, propane, a regulator and fittings, but the cabin is next to a flowing stream and equipped with bunk beds, a vault toilet, and food. Road access to Stevens Camp is usually pretty good, and there is room to park horse trailers or large rigs. If the cabin is occupied, snag one of the nearby primitive camping areas. 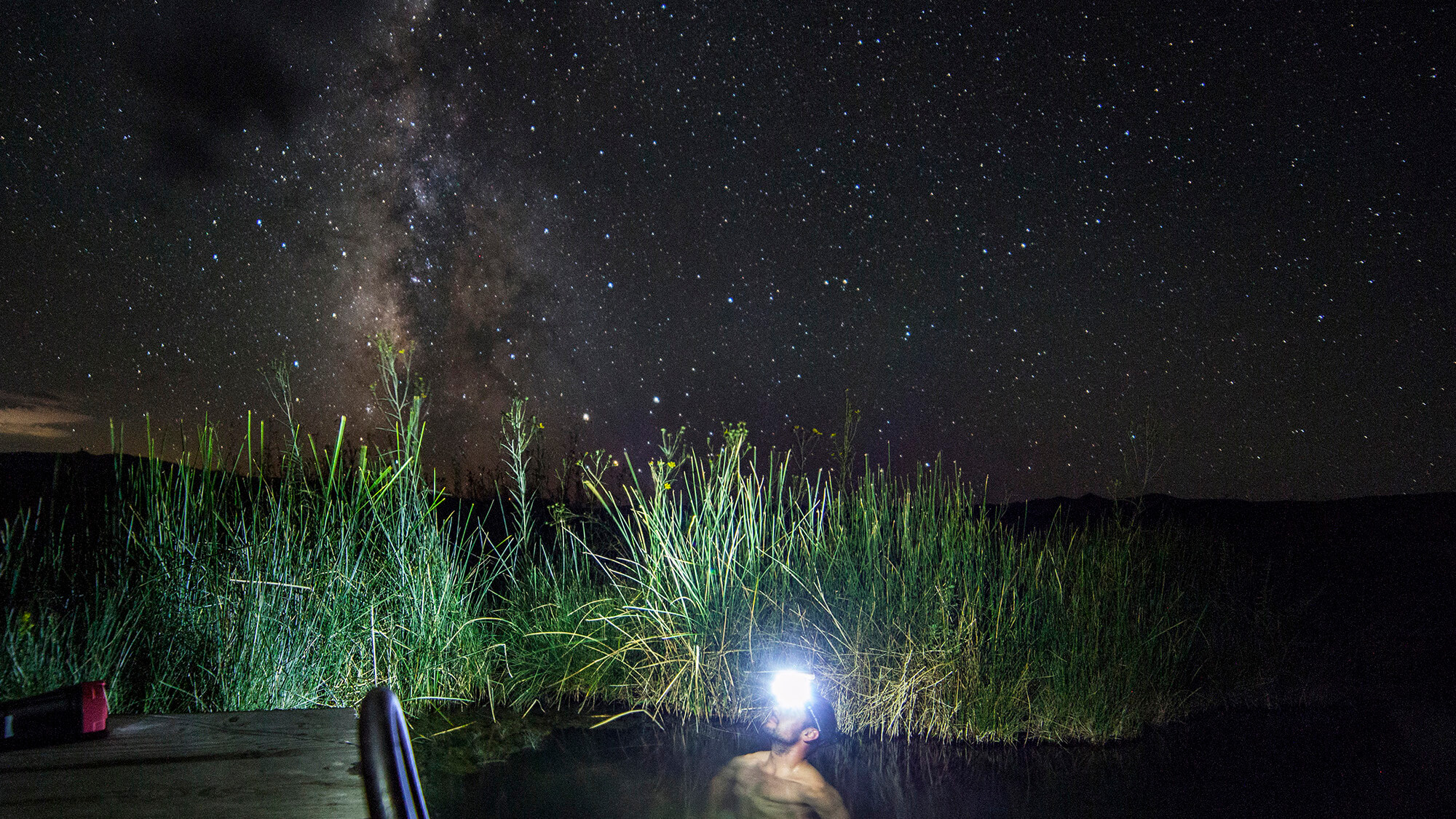 When exploring Nevada’s beautiful backcountry, always remember to travel prepared. Remember to bring a spare [a tire patch kit wouldn’t hurt either], extra fuel and plenty of food and water. This is a tremendously beautiful section of Nevada, but is said to be one of the most rugged and remote corners of the USA. It proves to be a great way to disconnect from it all, but remember, you will in fact be disconnected from cell service and away from modern conveniences like restaurants and gas stations. Do not attempt to travel in this area unless you’ve come equipped with a high clearance, 4-wheel drive vehicle (especially Fly and High Rock Canyon). Travel smart and plan ahead. 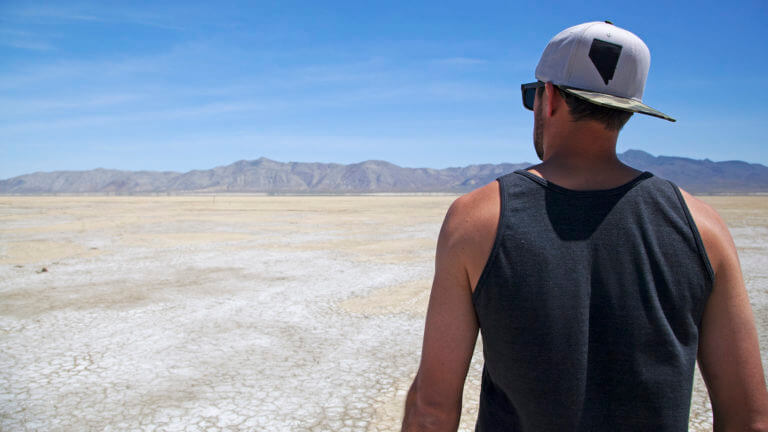 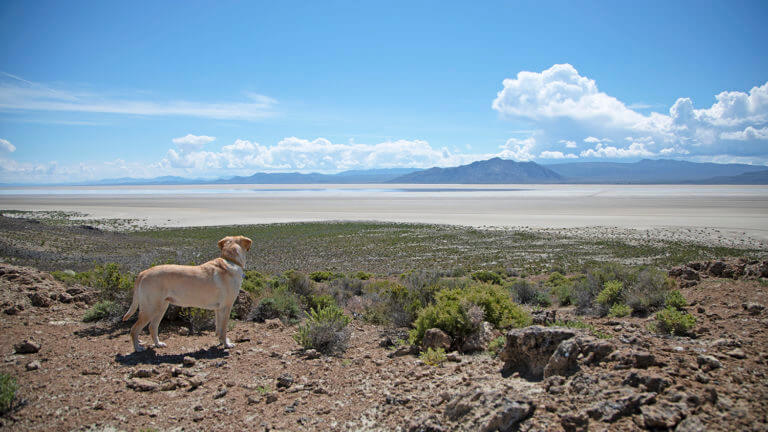 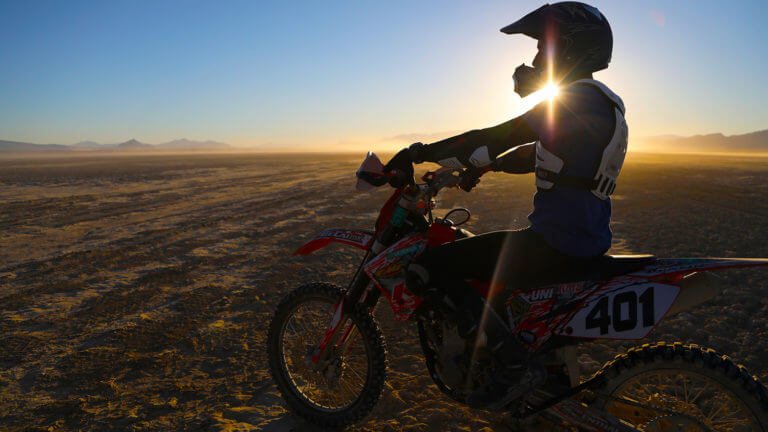 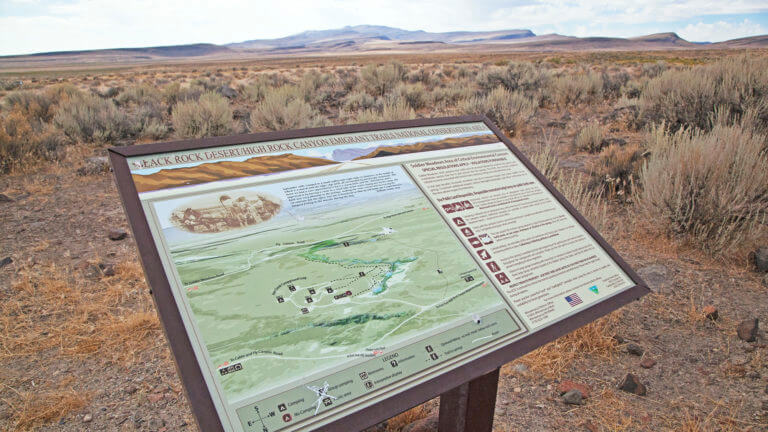 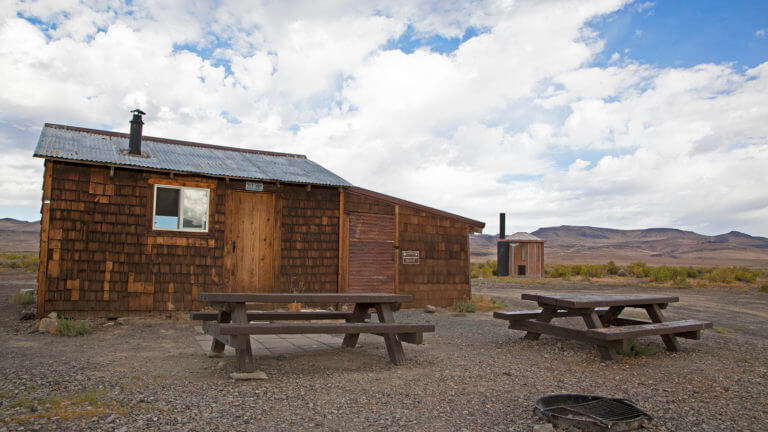 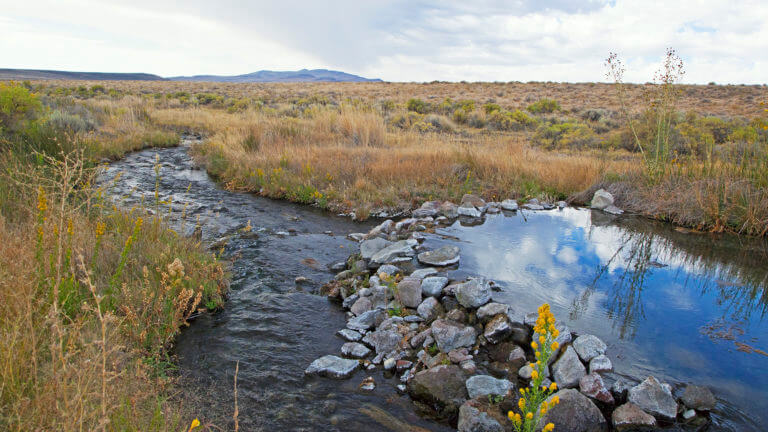 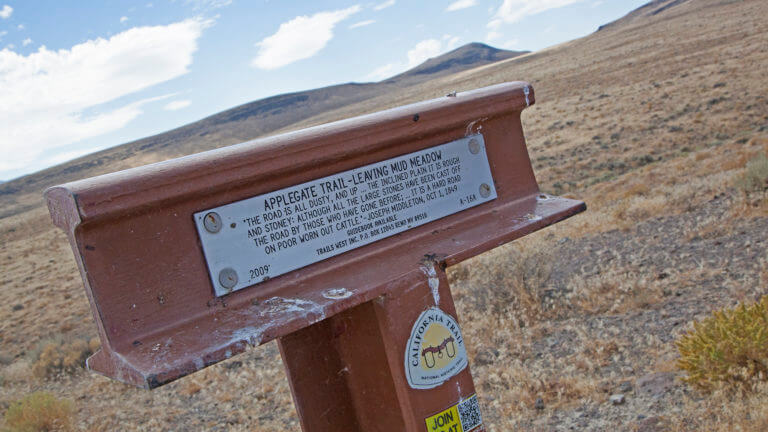 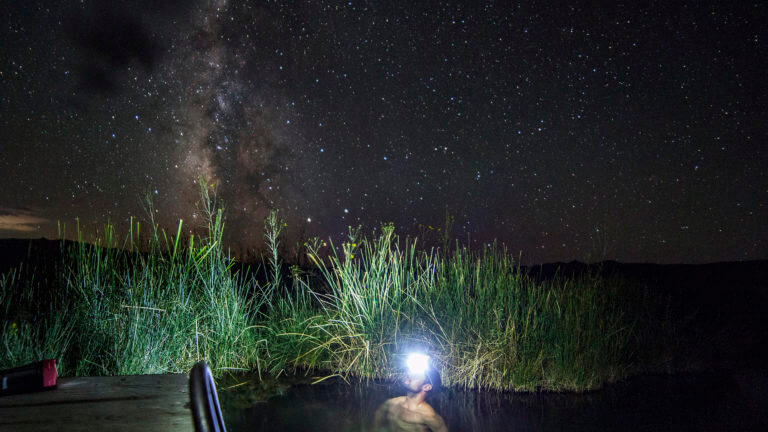 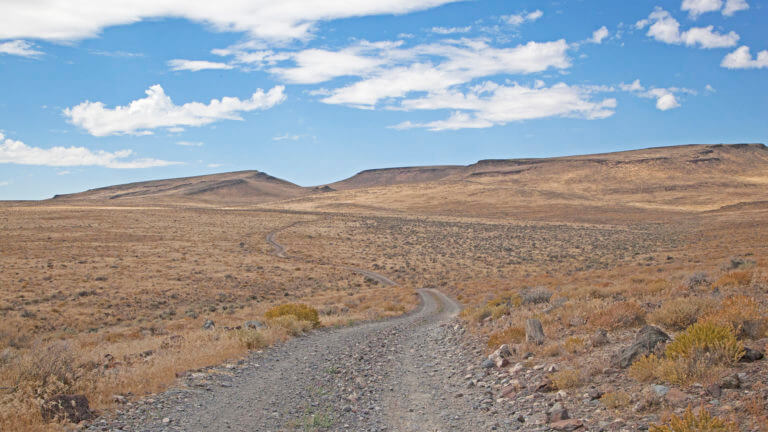 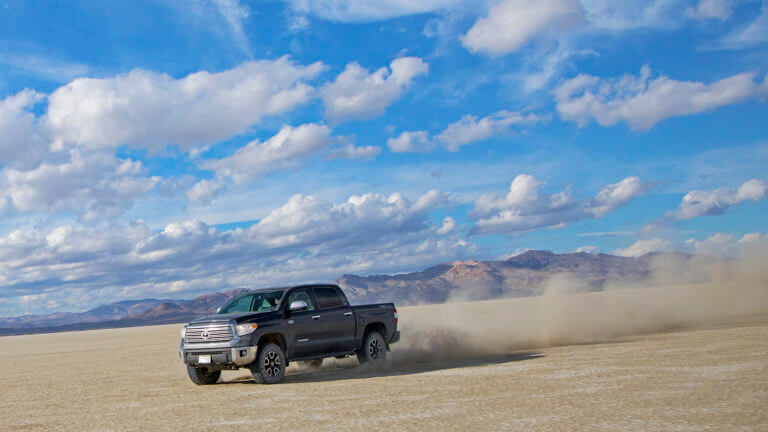 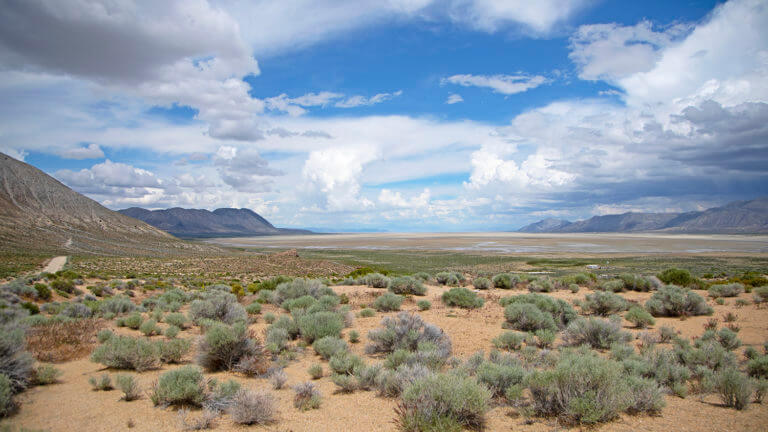 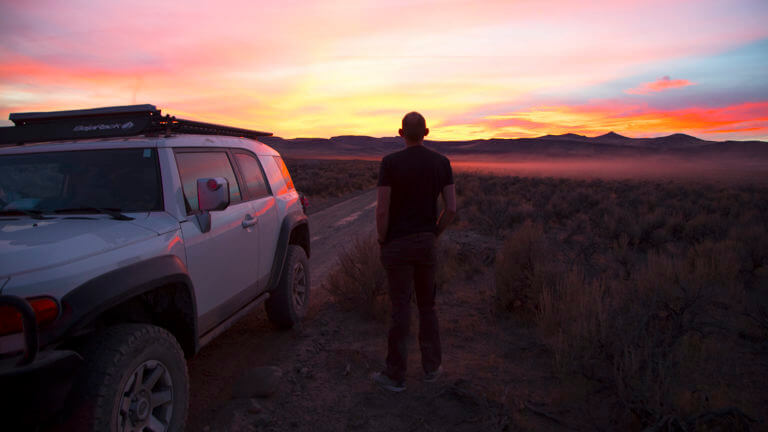 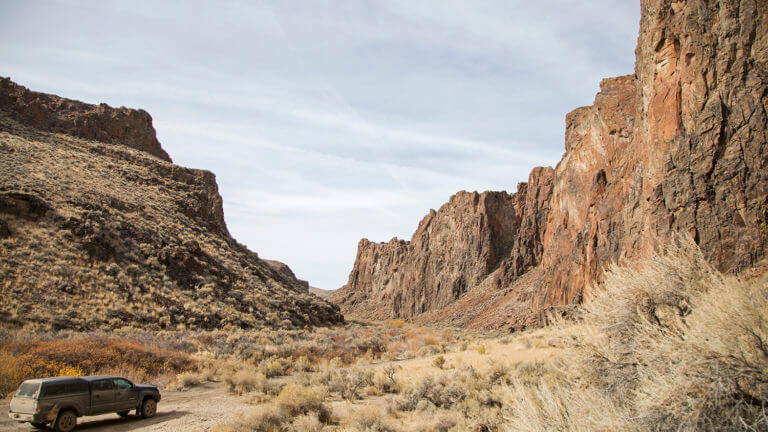 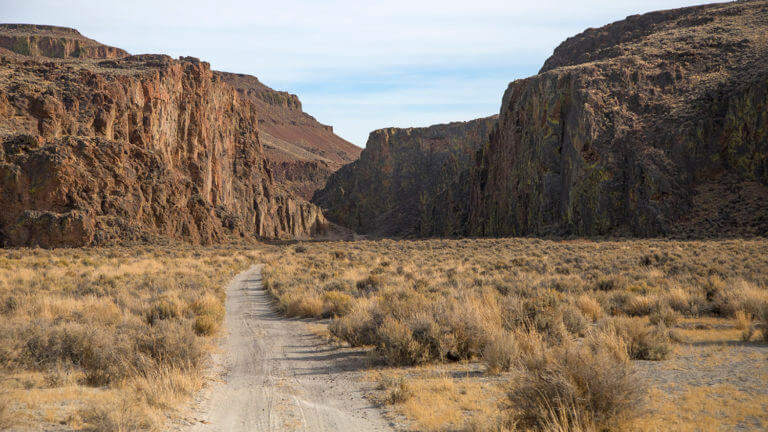 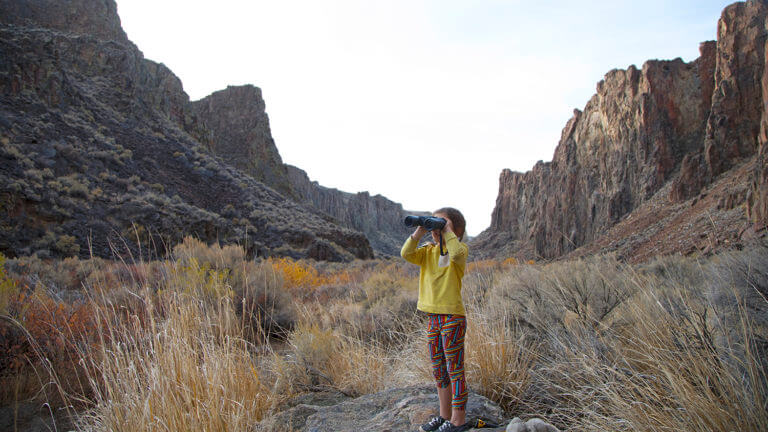 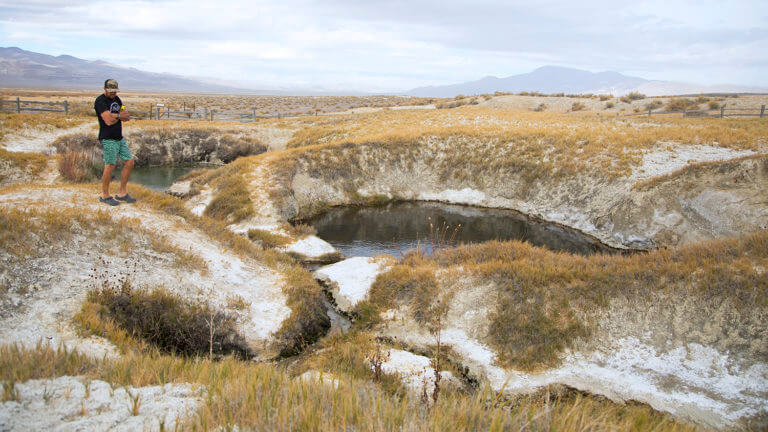