The reason? Nevada is home to over 600 wildlife species and only a few dozen of them are game animals, meaning the remaining several hundred species are not hunted, including a variety of songbirds, bats, rodents, snakes, and lizards. Some of these species live in very isolated and remote parts of the state, while others might be common in your backyard. That’s where I come in. The Nevada Department of Wildlife is tasked to protect, conserve, manage and restore wildlife and the Wildlife Diversity Division, where I work, is responsible for the non-game part of that.

Every day of my job is different, which is maybe what I love about it most. From winter bat surveys focused on disease surveillance and hibernation counts, to setting out hundreds of aluminum live traps for small mammal inventory surveys—almost every day brings me into a different part of Nevada, studying a different species. But, the project I’m most looking forward to this spring and summer is our Northern Goshawk study in northeastern Nevada.

I imagine most people are familiar with eagles and maybe that red-tailed hawk you see perched on the power pole on your way to work, but the Northern Goshawk—Accipiter Gentillis—is not as familiar, partly because it isn’t that common and obvious, spending much of its time quietly stalking prey in thick forests. However, ounce for ounce, this bird is probably the most agile and fiercest of raptors in Nevada, zipping through the trees and on the forest edge, aggressively hunting for small birds and mammals. Adult Goshawks are a silver-gray with a white eyebrow and startling red eye.

Although they can be stealthy, they have an intimidating and screeching alarm call that they can use to scare you from their nest. Most people don’t go looking for, or know where to find a Goshawk nest, but as a Diversity Biologist who is trained to study these birds, approaching a nest can be exciting work. I’ve heard stories of biologists getting too close to a Goshawk nest and the mere sound of this 2-3 pound bird can cause even the brawniest person to drop to the ground. In some cases, biologists who don’t duck fast enough end up with scratches, or even stitches from the bird’s incredibly forceful dive-bombs.

But approaching their nests, trying to get a closer read on the Northern Goshawk is exactly what we are trying to do on trapping day. We first locate an active nest, quietly observing until we know the nestlings are a couple of weeks old. Once nestling age is confirmed, we then go in and set up a large net, sort of like a black volleyball net but with finer mesh, attached to two poles via clothespins near the nest tree. We use a simulated bait, to draw in the Northern Goshawk for us to trap, study, and release.

The bait is a mounted Great Horned Owl with a remote caller that “hoots”. Once the black bag covering the stuffed owl is removed and the owl is detected by the adult goshawk at the nest, war is almost instantly declared. We then quickly sneak away to an observation spot, draped in camo netting, waiting and watching with an occasional push of the “hoot” button from afar. Great Horned Owls are known to frequently attack Goshawks and their young, so often times the wait is short before the adult Goshawk responds to the brazen intruder. That, and because female Goshawks are often the most protective because of their maternal instincts—good mama!—she’ll zip in and swoop on the owl. Her goal is simple—scare off, or eliminate this threat. 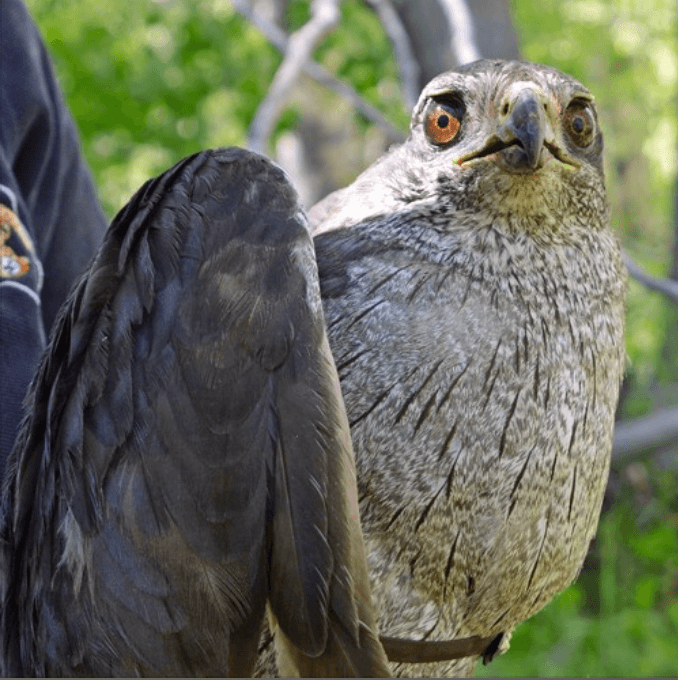 There might be a “bluff-charge” swoop or two, but often times the bird goes all in, ripping the feathers or even the wings and head off of the owl mount, which is what makes this trapping technique so effective. The Goshawk becomes so focused on the owl that she doesn’t see the net behind it until it’s too late. Bam! She hits the net, the net breaks away with the bird getting tangled, and we quietly and quickly dive in to do our work.

Step one: we carefully untangle the bird from the net and cover her eyes with a falconer’s hood, which serves to mask their eyes and calm the bird down.

Next, her talons are wrapped to protect both us, and the bird. She quickly calms down as one of us settles in, holding her wings to her side. No matter how many times we move in for this type of survey study, one thing never changes: It is surreal holding the same notorious bird that Atilla the Hun had pictured on his helmet.

We take measurements of weight, talon size, wingspan, and tail feather length, and attach a small metal leg band as a unique identifier. The next step is the most important—outfitting her with a transmitter.

Similar to computers and smartphones, the technology available to wildlife biologists has advanced by leaps and bounds, enabling use of a small, 22 g (about the weight of 4 nickels) transmitter that is capable of telling us where the bird is on an hourly basis. Even better yet, the transmitter is solar-powered and all of the information is satellite-based, meaning we simply download the data through a website on a weekly basis. The transmitter is put on much like a backpack is, with loops around each wing, and we take extra care to make sure it is a perfect fit before releasing our bird back to the Nevada wilderness.

When all is said and done, the entire process—from setting up the catch and release trap, to completing the survey, and releasing the bird—takes less than an hour. Our female Goshawk appears unaware of her new bracelet and backpack, which is a good thing. We start getting locations for her immediately and follow-up with later surveys to observe the adults and young, particularly how many young fledge, which means they are old enough to fly (although often not gracefully at first). By the end of the summer, not much evidence of the birds remains at that nest site aside from some white droppings and a few feathers.

So you might ask, why go to these survey lengths for just one bird species? Some studies have found that half of the world’s raptor populations are in decline—and when a species like this is impacted, it’s often a good indicator of larger environmental concerns. In Nevada, Goshawks have special protection designations from the State, U.S. Forest Service, and Bureau of Land Management, which certainly helps with conservation. But as a whole, our knowledge about the Goshawk, including its movement patterns between summer and winter, and its unique habitat associations, is limited.

Before this study we knew they are most often found nesting in the isolated aspen woodlands in the Nevada—think Jarbidge, the Ruby Mountains, and Monitor Range near the Alta-Toquima Wilderness Area—but not much about where they moved outside of the breeding season, particularly in the winter months. We weren’t sure if our birds migrated and if so, were these large migrations that many other raptors follow, or smaller distance migrations? And what features of the landscape might the birds be might drawn to?

Our first transmitter went out in 2017 and we have a couple more years of data collection before any in-depth analyses can be completed but this information helps us understand how to best protect this sensitive species and what actions might be benefiting or negatively affecting it. That, and the data collected during these surveying efforts allows us to determine the day-to-day (sometimes even hourly) movements of the birds, the size of their home range, and types of habitats they are using at different times of year. Data from these studies can also cue us in on new nest areas, when Goshawks are showing up to nest, how they move in and out of the area if habitats are impacted, and more.

Mackenzie grew up in North Idaho and received dual bachelor’s degrees in Wildlife Ecology and Conservation Biology from the University of Idaho, followed by a Master’s degree studying river otters from Kansas State University. She spent several years studying American Pikas in national parks across the West before joining her husband Matt—a big game biologist in Elko—and the Nevada Department of Wildlife. Mackenzie and Matt spend most of their spare time hunting, fishing, backpacking and camping on public lands in the American West and they are passing on the love of nature to their three small children.