From unbeatable trout fishing along the Jarbidge River in the north to the West’s best bass fishing in Lake Mead and the Colorado River in the south, prime fishing holes are found throughout Nevada. Some of the best fishing in the country can be found at Pyramid Lake on the Pyramid Lake Paiute Reservation, where anglers cast flies from submerged ladders for Lahontan cutthroat trout, a salmon-sized fish once believed to be extinct. Other can’t-beat-it fishing opps beckon anglers to a legendary stretch of river at “The Elbow” unit of the East Walker River at one of Nevada’s newest state parks—the stuff of fly fishing legend. In winter, many of the Silver State’s countless high-desert alpine lakes and reservoirs freeze over, making for excellent ice fishing at places like Eagle Valley Reservoir near Caliente, Kingston Canyon outside Austin, Wild Horse Reservoir outside Elko, and beyond.

Searching for the best places to go fishing to Nevada? With trout-packed streams and rivers, and crowdless alpine lakes and reservoirs, we can’t say we blame you. From state parks with full amenities like fish cleaning stations and boat ramps to remote backcountry fly fishing, fishing opportunities in the Silver State flow endlessly. Before you head out, be sure to get your hands on a Nevada state fishing license. Then check out where to go fishing with this foolproof, year round fishing lineup.

For many anglers, catching a wily bull trout is the final leg of the International Game Fish Association’s “Trout Royal Slam,” the brag-worthy mission to land each of seven coveted trout species. In summer and fall, cast dry flies in the Jarbidge River and you might just hook into one of these olive green beauties (catch-and-release only) along one of the best fishing spots in the state. Even if you don’t, these wild streams are packed with plenty of redbands, brookies, and rainbows to go around.

Glacier-carved summits, deep U-shaped canyons, free-flowing streams and trout-filled alpine lakes make the Rubies top of the list for any hiker and fisherman. For laid-back and relaxed fishing, drive right up to Angel Lake or the Lamoille Canyon beaver ponds and cast for brookies, rainbows, and tiger trout. Or head into the crowdless mountain range encircling them—one of the most beautiful in the state for a backcountry angling adventure—at Island, Lamoille, Liberty, or Overton Lakes.

In the film “On Golden Pond,” Henry Fonda chases a huge trout called Walter. Land a monster that’ll make Walter look tiny at this turquoise desert gem, surrounded by sculpted tufa formations. Float tubes, boats, and fly casting from the shoreline are all fair game at Pyramid Lake, but hooking into one of its gargantuan Lahontan cutthroats (the record stands at 41 pounds) often requires unorthodox methods. Anglers stand on ladders in a few feet of water so they can cast to the lakebed’s drop-off. When’s the last time you and your fishing buddies did that?

When Tahoe’s snow runoff slows in early summer, anglers fish the 110-mile-long Truckee River for rainbow, brown, and cutthroat trout. The river’s western section from Tahoe to Reno is steep, fast, and cold, so pull out your dry flies. The eastern section from Reno to Pyramid Lake is warmer and slower, with banks blanketed in sagebrush tufts and shady cottonwoods shading holes home to trophy-size river fish, especially wild browns and rainbows.

The IGFA recognizes angling achievements through its slam and trophy clubs. All seven trout required to achieve the Trout Royal Slam can be found in Nevada waterways: Rainbow, Brown, Bull (catch & release only), Golden, Brook, Lahontan Cutthroat, and Mackinaw.

Formed by Hoover Dam, massive Lake Mead straddles Nevada and Arizona. While anglers may be rewarded with a smorgasbord of fish, when it comes to Lake Mead, baby, it’s all about that bass. Bait your lure with anchovies and you might haul in a 40-pound striped bass. At dawn and dusk, a largemouth bass could take your hook. If you’re looking for black crappie, bluegill, or channel catfish, fish the lake’s upper Overton Arm—where you can also rent fishing boats, houseboats, and more.

Situated in the Great Basin of the West, just south of Elko, this National Wildlife Refuge is an unsuspectingly lush wetland oasis, perched right in the heart of Nevada’s high desert. Sprawling across more than 350,000 acres of land, the marsh is 16 miles long and packed with six species of trout—rainbow, brook, brown, cutthroat, cutbow, and tiger. Fish from the shoreline, or jump in a drift boat to bask in one of Nevada’s only largemouth bass fisheries.

In the Lake Tahoe area and looking to dip away from the crowds? Head for Topaz Lake, which straddles the Nevada-California state line, just south of beautiful Carson Valley. A manmade reservoir created in 1922, this high-desert stunner is loaded with rainbows, bowcutt trout, brown trout, and tiger trout. Set up camp at one of the recreation area’s spacious, modern campsites to take advantage of the lake’s fish cleaning station, boat ramp, and drive-up beaches.

After 125 years in private hands, the splendor of this coveted slice of the Silver State is ours to enjoy. Spanning 12,000 acres of rangeland—including 29 miles of the East Walker River and a fabled section known as ”The Elbow”—this storied stretch of riverway beckons locals and visitors alike. Here, in accordance with the section’s pristine and undeveloped character, visitors will find nearly two dozen primitive campsites with direct access to the water’s edge.

In need of an off-grid reset? We can’t think of a much better escape than Beaver Dam State Park—Nevada’s most remote and least trafficked state park. The park’s deep canyons, flowing streams, and waterfalls deliver the perfect backcountry escape for camping, fishing, picnicking, hiking, and wildlife spotting opps imaginable. Head for the Oak Knoll Trail—an easy hike that skirts a flowing stream stocked with rainbow trout. For small-stream fly fishermen and fans of Tenkara style fishing, it’s hard to beat these cool runs.

If Nevada’s tallest peaks and the darkest skies in the country aren’t enough to get you to Great Basin, the fishing certainly will. Brimming with alpine lakes, this Nevada national park is home to one native fish species—the Bonneville cutthroat trout—and is stocked with Lahontan cutthroat, rainbows, brookies and brown trout. Basecamp at 10,000 feet elevation at Wheeler Peak Campground, which provides easy access to the Alpine Lakes Loop hiking trail, ancient bristlecone pines, and the last active glacier in Nevada.

Get Yourself Legal with a Nevada Fishing License

Before casting a line into any bodies of water in the Silver State, be sure to get your hands on a proper state fishing permit. The easiest way to get a Nevada Fishing License is to log on to the Nevada Department of Wildlife’s website. Already here? Grab it at one of the state’s many license agents, but be sure to check the area you plan to fish before you travel—there are some areas in Nevada that do not have license agents. The NDOW site also offers the Nevada Fishing Guide, as well as fishing maps, stocking updates, and other helpful info.

If you’re fishing Pyramid Lake, you will need a permit from the Pyramid Lake Paiute Tribe. For details and permits, visit PyramidLake.us, and click on the fishing link.

Get Outside Guide: Summer in Nevada’s Ruby Mountains

Venture out a little deeper into Nevada and you might be surprised at the world of landscapes you uncover and the people you’ll assuredly cross paths with. Swap tumbleweeds for alpine lakes and Joshua trees for rugged peaks… then grab your rod and enjoy a state where trout-packed rivers, lakes, and streams pretty much promise a fish on the line, no matter where you cast it.

Ready to show off that native Dolly Varden or 20-pound Lahontan cutthroat trout you hauled in? Get reel and tag that victory shot with #NVAdventure and #TravelNevada. If we love your photo, you may find it featured here. 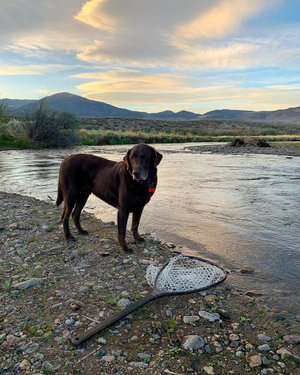 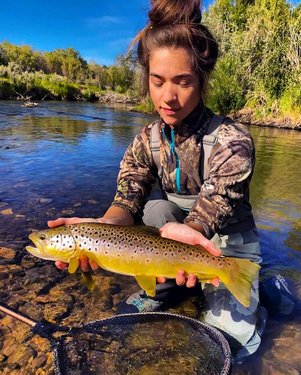 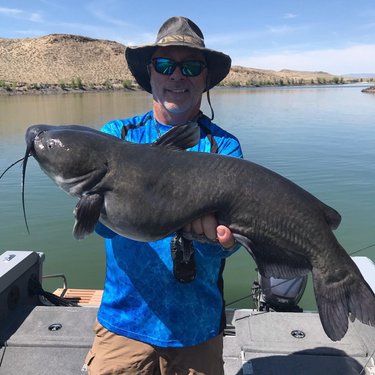 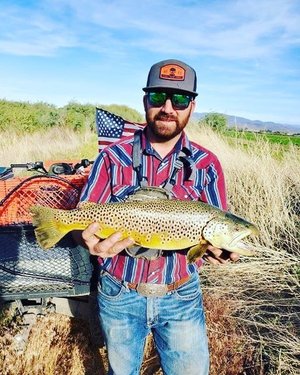 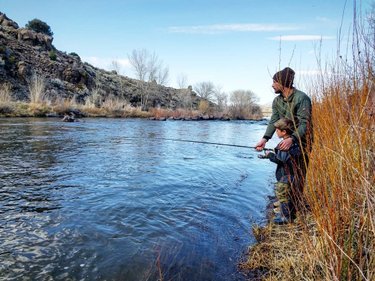 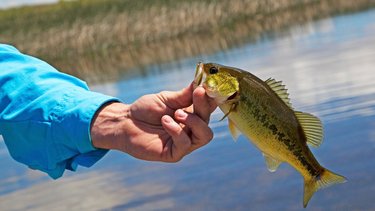 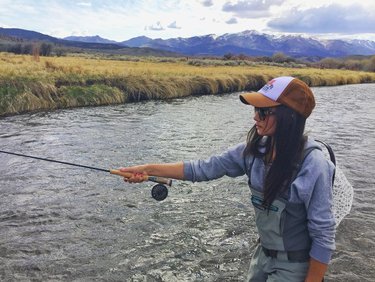 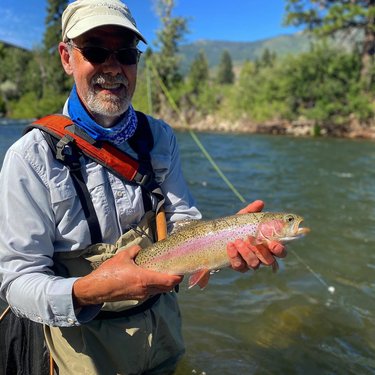 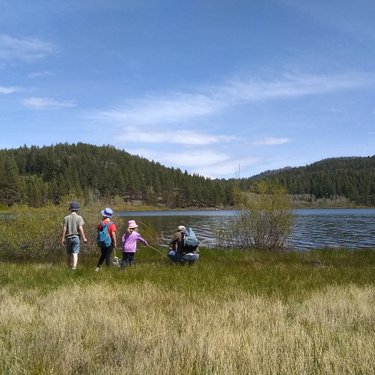 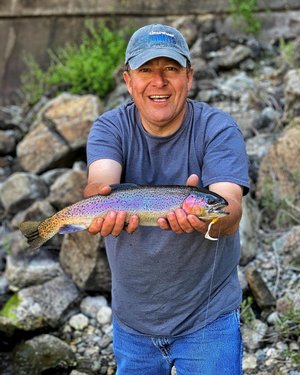